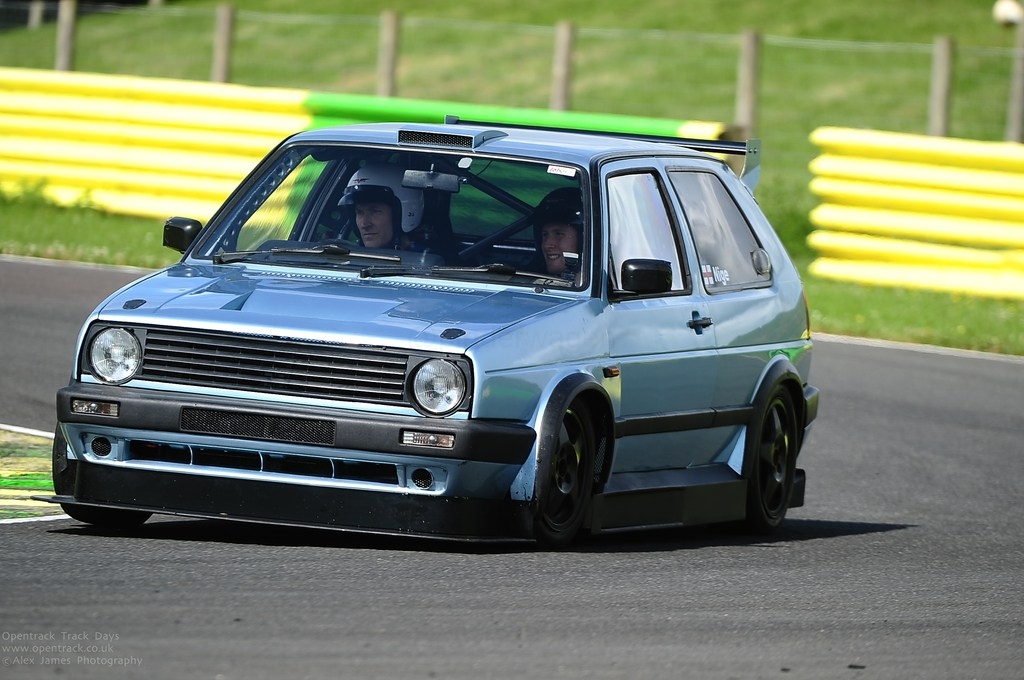 A bit of a last minute rush to get it finished, but it was loaded up onto the trailer around 6pm on Sunday evening.

Funny, reading back that one sentence doesn`t even come close to reflecting the amount of work I put in last week to get it ready in time…

Nice drive up on Monday morning, unloaded and had a natter whilst waiting for the drivers briefing.

Time for the sighting laps, I was turning round in the paddock and the inner CV failed. WTF

It just fell apart on full lock. When inspecting it after, it`s intact, but the balls are pretty loose in the cage, I think it`s just worn. Fortunately, I had a spare driveshaft and swapped it over but obviously not the best start to the day ! After that, it was a case of doing a few laps, checking everything and then going back out again. Ran the first couple of sessions on actuator pressure only and made a point to avoid the kerbs as I didn`t have another spare inner CV.

Look, no Kerb ! No Apex either, but lets pretend we didn`t see that? No Kerb through the chicane in the morning. Although I didn`t close my door properly.. Car felt brilliant through the faster stuff, the rear was a touch more mobile than before, but nothing scary. Trail-braking into Sunny-In caused Matt to get cross with me.

I am used to it recovering very quickly, so was reacting to that, even though it was moving a little more. I was trying to get the rear mobile, just to see how it felt with the reduced rear Toe-in.

One particular occasion, I lifted and steered into it, but if I`d kept my foot in and the wheel straight, it would have been absolutely spot on. As it was, I made a right mess of it…

Matt told me off for that one When i`d had the Manifold off, I straightened the actuator arm, it wasn`t pulling square on the wastegate. I reset the pre-load, but it was too tight and at 45% boost control, it was hitting 1 bar, instead of the usual 0.8. Dropped the boost control map slightly, but it meant actuator pressure was a little higher than before and higher boost was noticeably quicker.

I said to Matt “can you look at the boost please ? I`m sure it`s accelerating faster than usual”.
`Yeah, it`s just touching a bar`
“I`ll drop it a bit then”

Yeah yeah, I know. A bar is nothing, but I`m still a little paranoid about the boost and engine issues, so I`d rather run 0.8 and have it reliable than up it a bit and get issues.

A couple of laps from mid morning

The new ratios in the gearbox are certainly taller. The car didn`t feel that much slower when accelerating, but is makes 3rd and 4th VERY useable.

At the ring, where I`m pulling 4th for a few seconds, then back to 3rd, I`ll be able to leave it in 3rd. Approaching Karussel from Steilstrecke, Brunchen 2 to Eiskurve, approach to Mini Karussel etc. Whether that will make me slower or not, I don`t really know, but it will make it smoother . Gearbox is a touch noisier than the old one, but that particularly quiet.

I hope this will let me use the torque of the engine and have less gearchanges, but still be similar pace. I may come back from DN saying it was far too tall and refitting the 3.9…

Started lightly running the kerbs after lunch, no issues and it was fine nailing it out of the hairpin onto the main straight, so I`m happy the inner CV was just worn rather than some other issue causing it to fall apart. We`ll see if that statement comes back to bite me.. Started raining after lunch, but I left the slicks on. It wasn`t wet enough for proper wets and my cups are no better than slicks in the damp anyway. Obviously the car moved around a bit more and traction onto the main straight was lacking. i found leaving it in 3rd was quicker than trying 2nd and just getting wheelspin.

Had a few half laps with this Megane, but never a full lap. Had this in the damp, but he was pitting just after, so we never had a play.

Next to last session and going round Hawthorn before the chicane, everyone was struggling for grip. One one lap in particular, the rear came round more than usual. A lad was in a Fiesta ahead of me and when I passed him after the chicane, he gave me a big thumbs up. Had a chat to him after and he said he was watching the mirror and me getting sideways as much as where he was going. I was pleased it was very controllable though and didn`t frighten me at all.

The front airdam is aluminium sprayed with etch primer then matt black. It is obviously still very susceptible to stone chips, so I`ll give it another quick spray for DN, but then cover it with some black vinyl in the future, that should be less prone to chipping off. Post Croft inspection and everything was good. I hadn`t fitted the heatshield to the Turbo.

That was a mistake….

Today I fibreglasses some aluminium sided matting to the underside of the bonnet and hopefully I`ll get a better heatshield made tomorrow. After Croft I bought 2 brand new inner CV`s and swapped those over. The 2 that were on the car are now `spares`. Whilst I only lost 1/2 an hour, I don`t want to lose any time on a trackday ! I`d rather swap bits at home, rather than at the track on a day I`ve paid to drive on, not fix the car..