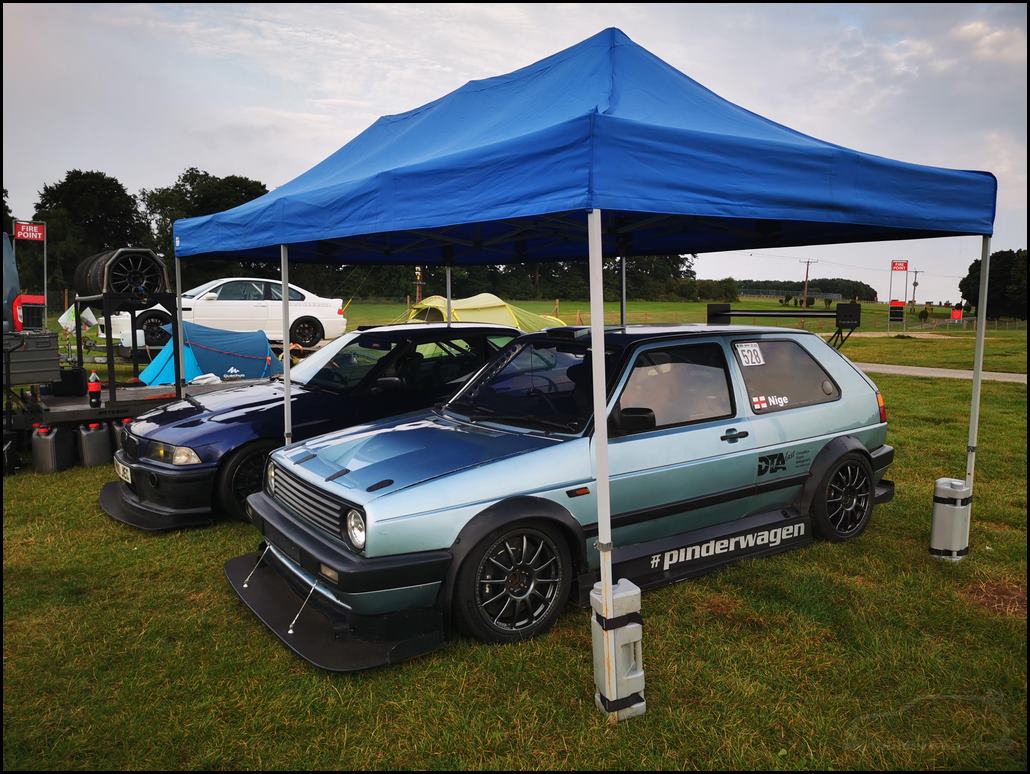 We fancied a mid-year Cadwell trackday and as the date approached, the weather forecast was for warm nights and clear days. Decision made. Instead of driving there and back in the day as I often do, we camped the night before.

I was taking the Golf, Matt was taking his E36 whilst Rich brought the E46. Andy C lives locally and said he`d like to pop along to what would be his first UK trackday in a decade. 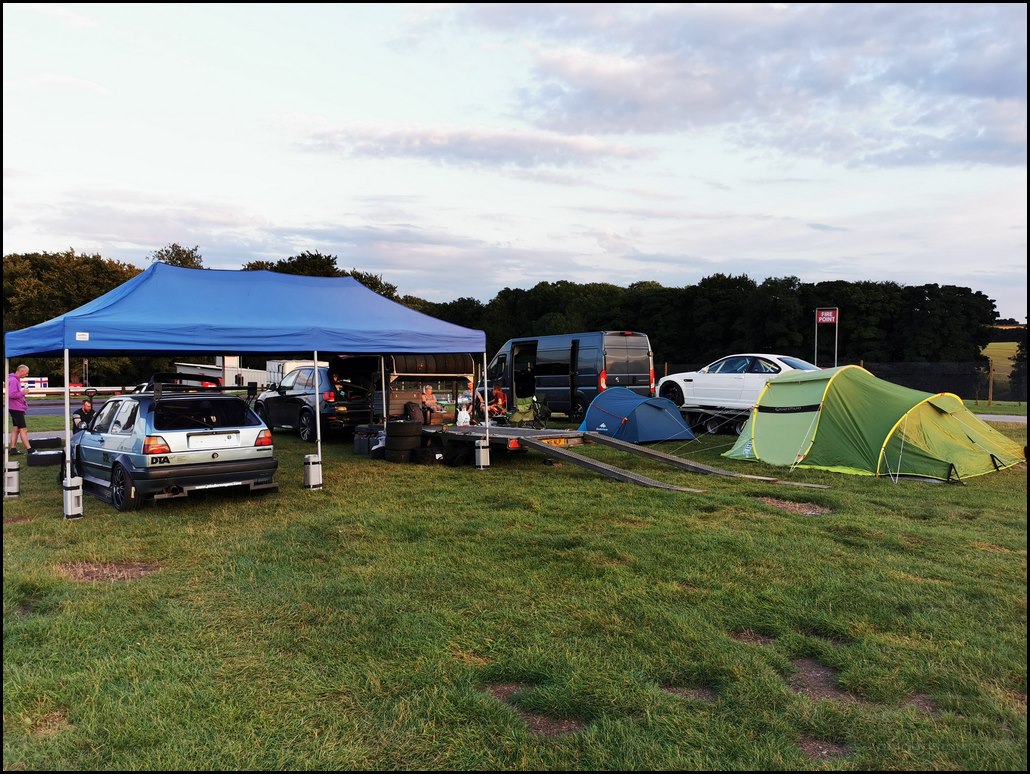 Once everything was setup we grabbed a beer and wandered off for a trackwalk. It never ceases to amaze me just how steep some circuits are. You simply don’t notice it when driving during the trackday but walking round slowly and taking the time to look forwards and behind you, some of the gradients are surprising.

Lou, Cat & Nic stayed behind to keep stirring the supper and make sure the wine didn`t evaporate 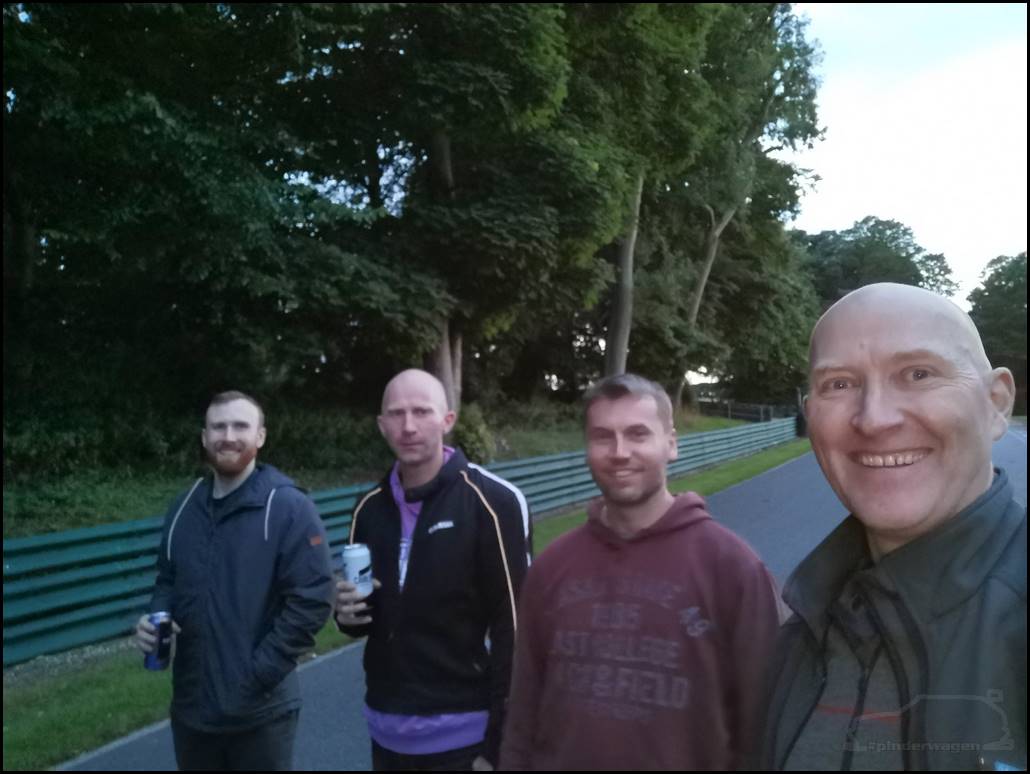 We stayed up until around 11pm, normally I`d be in bed much sooner than that before a trackday but we were all just chilling and I knew I didn`t have to set an alarm for 05:30 as I usually do before Cadwell.

The bloody crows made sure I didn’t sleep much past 06:30, so much for my cunning plan of getting extra time in bed.

It meant I could have a leisurely breakfast, get signed on and noise tested before it started getting busy and generally just have a relaxed start to the day. 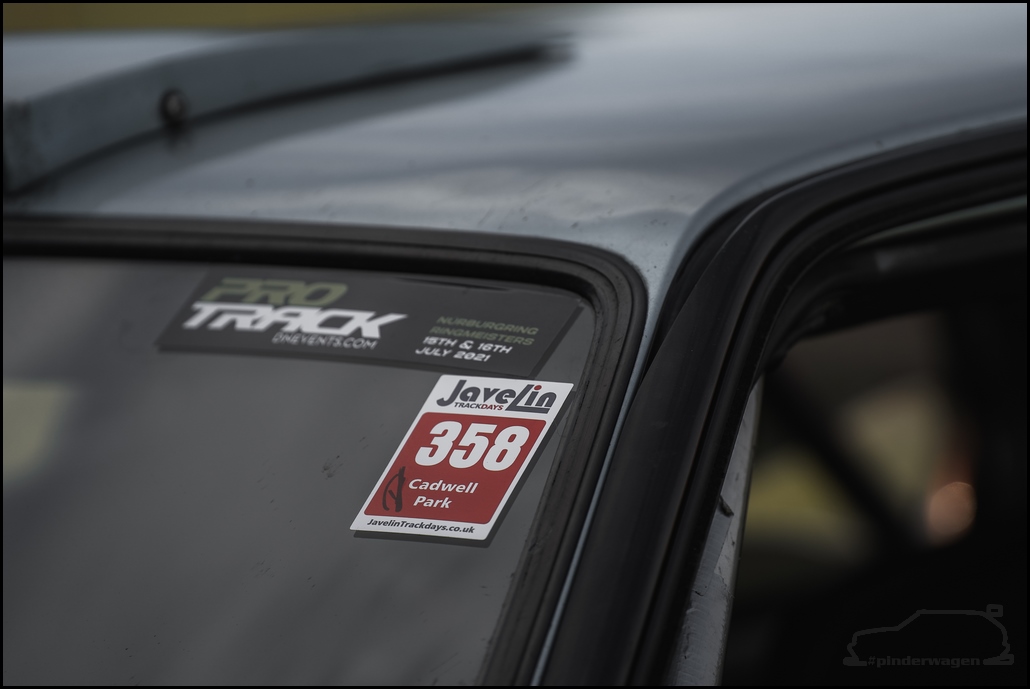 The sighting laps out of the way and I did 5 laps just to get everything nice and warm so I could do the initial large pressure drop and then Cat jumped in for the next session following Matt. The car felt great, the slicks warmed up nicely on the rear which can sometimes be a struggle and I was getting good grip from both ends of the car. 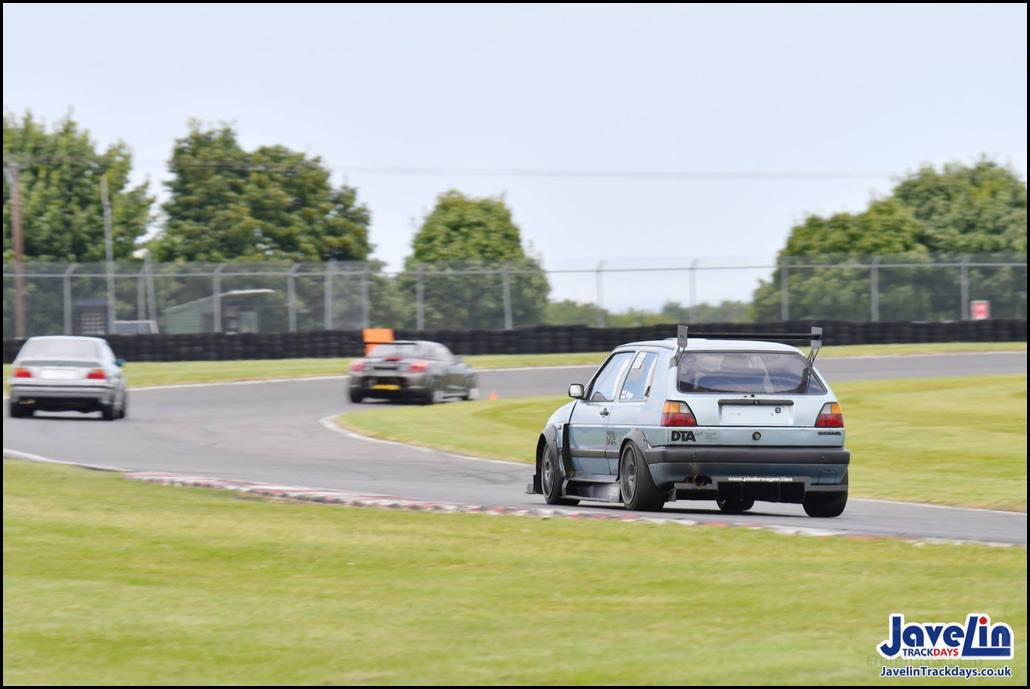 Back in and Andy jumped into the passenger seat. Anyone who has ever read my Nurburgring trip reports knows Andy is fast. Not only is he quick but he’s analytical, he sees all the little things you do whilst driving, both good and bad and we often discuss my driving during the session. What I wanted to do was let Andy have a drive himself so he could see some of the suggestions he was making wouldn’t work. Going through the gooseneck felt the best it’s done for a long time. I’d recently tweaked the geo and whilst the rear of the car moved slightly, it was never excessive or unexpected. 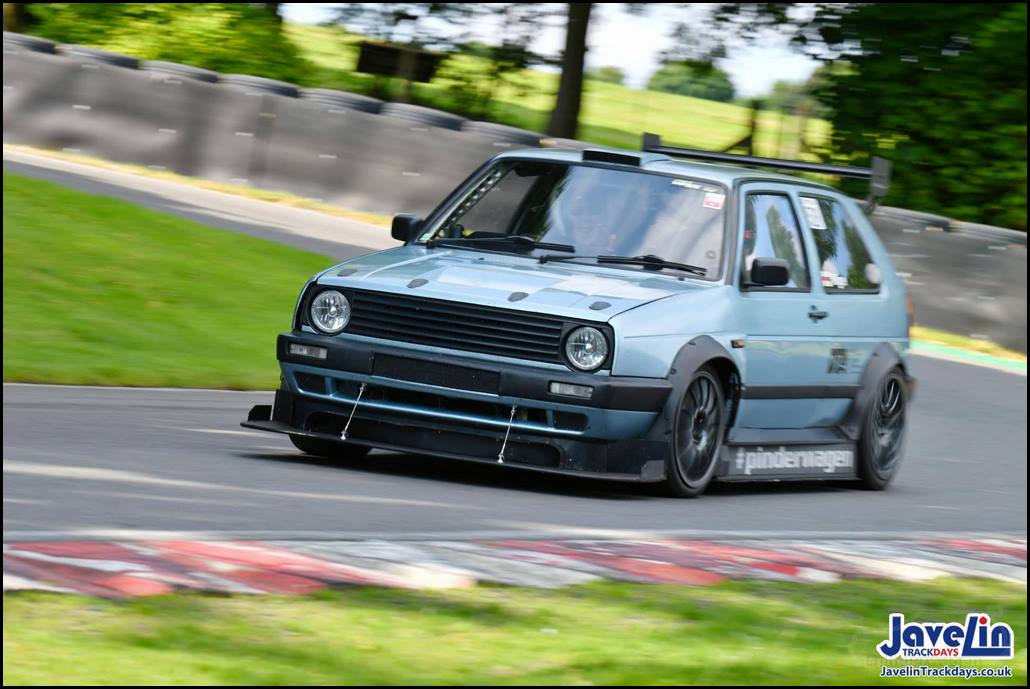 What Andy commented on straight away was how much I have the car moving around under me. At the Ring I don’t as the margins for error are smaller and I never push as hard, but at Cadwell the run-offs are larger and I can enjoy driving it with the rear mobile. Andy hasn’t seen that side of my driving before and it surprised him a little.

You get a feel for a car and what it likes, how early you can get on the power and what feedback the brakes are giving through the pedal. The only way for him to experience that was to sit in the passenger seat.

As expected he found fault. The brake feedback wasn’t to his liking, although looking at the data you wouldn`t tell. He was better on the brakes at the end of Park straight than I was. I put together these side by side comparisons for the whole circuit, they were extremely useful to use when going through the day afterwards and discussing in detail what we were doing the same and what was different. The only reason I was marginally quicker was this was Andy’s first time at Cadwell and he hadn’t driven the Golf for a few years. Even so, his feel was good enough to be almost as quick as me straight away, seat time and familiarity would soon close that gap.

We discussed some of the Golf’s idiosyncrasies and how the more a car is developed for track use, how it can often narrow the window in which it’s easy to drive. That isn’t to say it’s difficult, but I’m so used to driving it now I don’t actually notice some of the areas that aren’t perfect compared to when someone else jumps in the drivers seat.

We both comment about the slight wandering of the car at the end of Park Straight. After this day I checked the alignment and found the front wheels were parallel. After adjusting to the usual 3′ of toe in per side the issue disappeared.

Rich had been pushing the E46 harder and harder through the day and by mid afternoon he was quite happy with the car. We agreed I`d follow him for a bit and get a lap or 2 of footage of his car. I enjoy laps like these, even if I’m the car being followed closely by someone faster you can still concentrate on your lines and not worry about if they are trying to get past or not.

Nope, I just can`t like that front end no matter how many times I see it. Car looked good when following though. 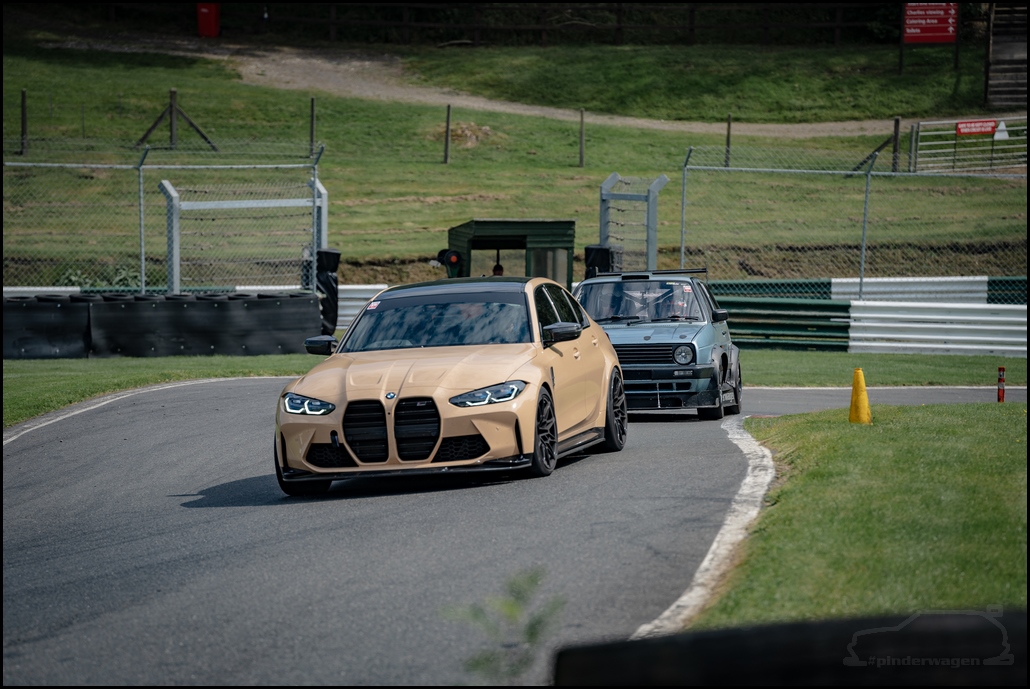 Entering Hall Bends and the aim is to get as close to the floppy as possible but do not touch it. If you do and it becomes dislodged, they red flag the session to put it back. On the last few days I`ve done at Cadwell, there have been more red flags for floppy refitting than anything else. 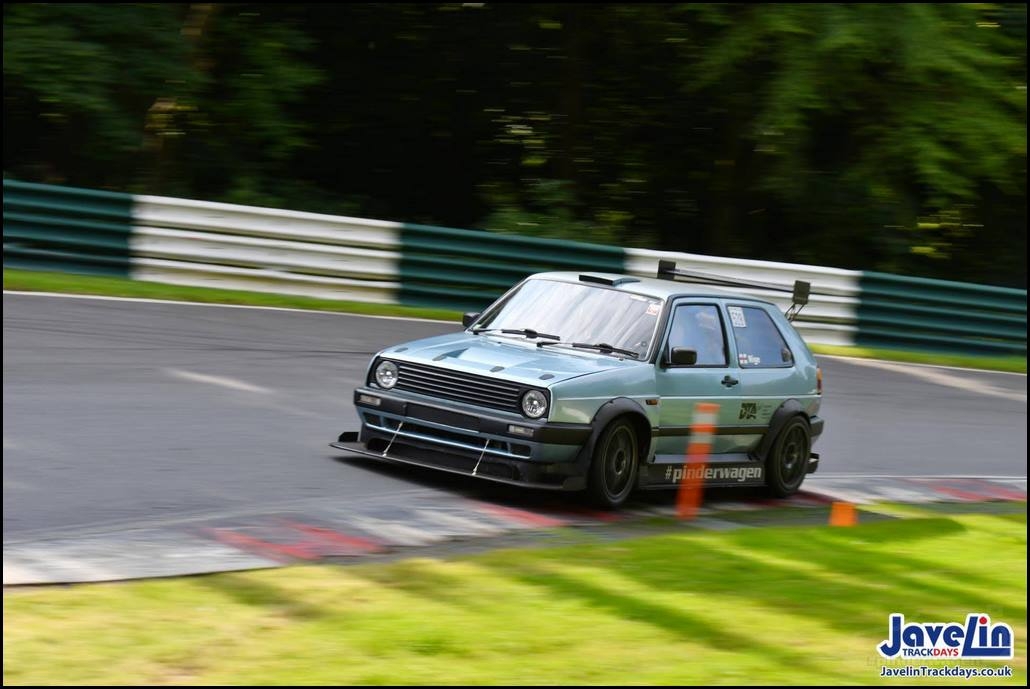 Matt was having a fantastic time in the E36, although he isn’t a huge Cadwell fan and prefers Oulton, you wouldn’t know it from how well he was going. He doesn’t do as many trackdays as I do but what we’ve noticed is that as soon as he pulls out of the pits he’s on it. No messing around for a few laps, he likes the car sliding around and those early laps when the tyres are cold are something he particularly enjoys. 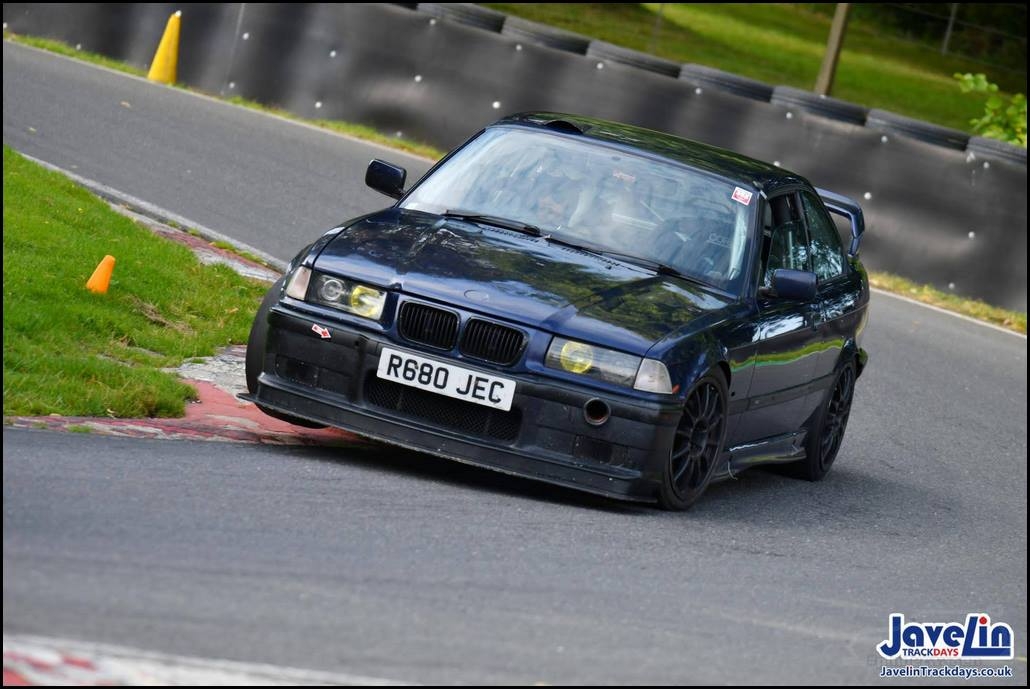 Took Cat out for a 20 minutes session. But even with the roof scoop and other vents, it was hot in the car and by the time we came in we were both roasting. I don’t really think about it during the session and only tend to notice how much I’ve been sweating on the cooldown lap, leaving the doors and boot open after the session certainly helps drop the cabin temps. 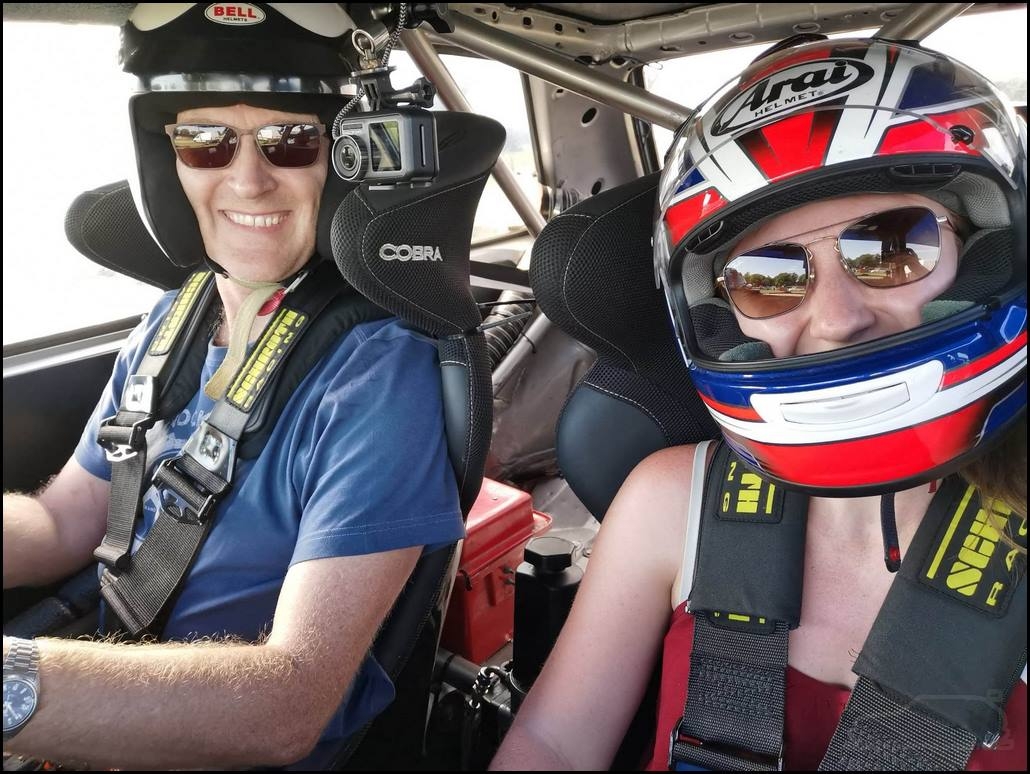 Matt had a vibration start mid morning and quickly diagnosed the gearbox > Propshaft bush. Jordan had a spare so Matt could swap it but it is a bit of a faff and he lost an hour of tracktime swapping it over. It has been on for a few years but when removed it had split badly. It’s not something you can see easily without removing the exhaust and heatshield so we hadn`t noticed it was failing. Yes, it is on axle stands 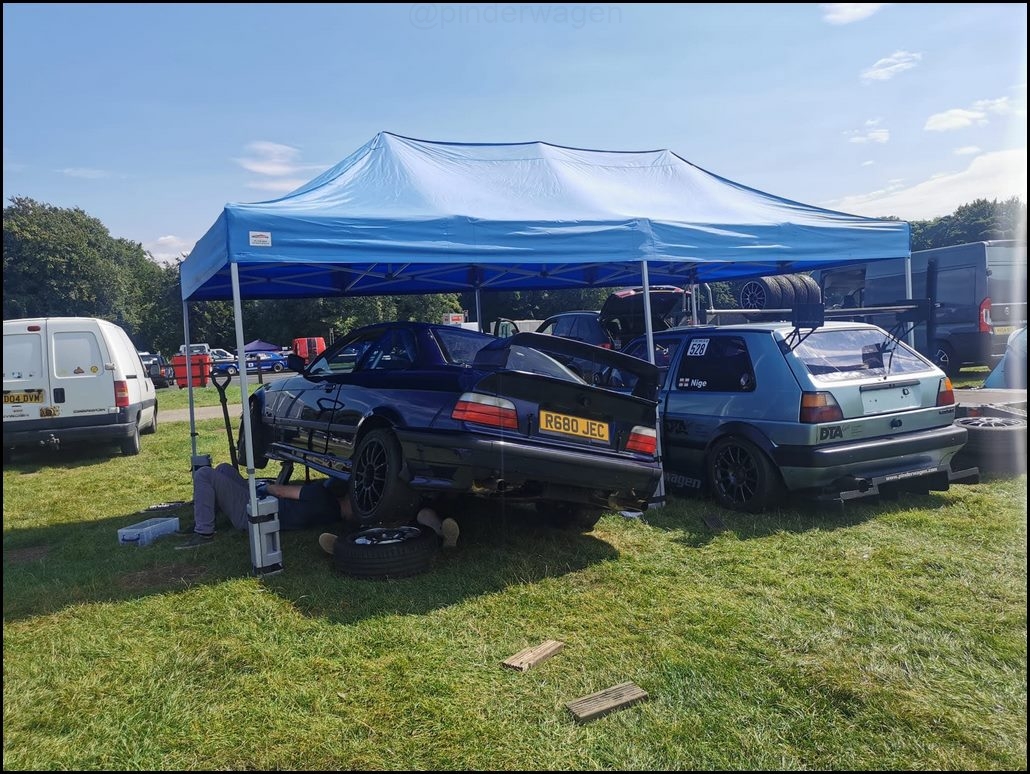 Between sessions the camping chairs were put to great use where we could have a sit and chill out. It was scorching ! 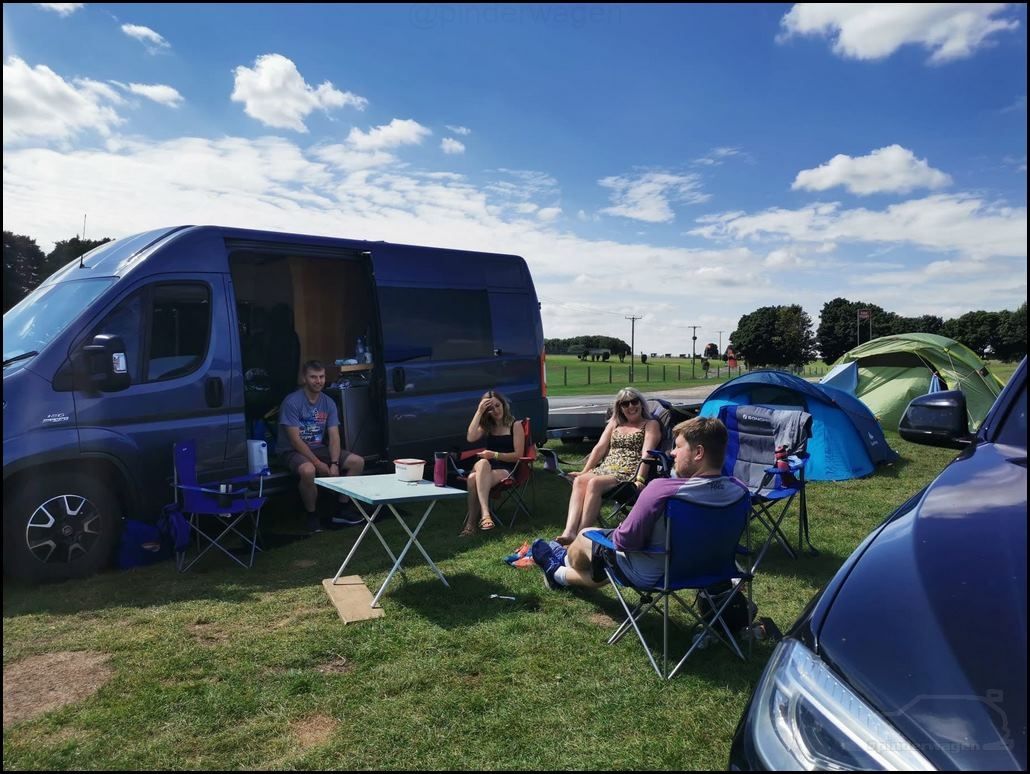 Andy C was swapping between Matt and myself. As Matts is just a well setup E36, Andy was much more comfortable in discussing the car handling and lines. When he drove it he said to me how balanced it was and easier for him to get into the groove compared to the Golf. 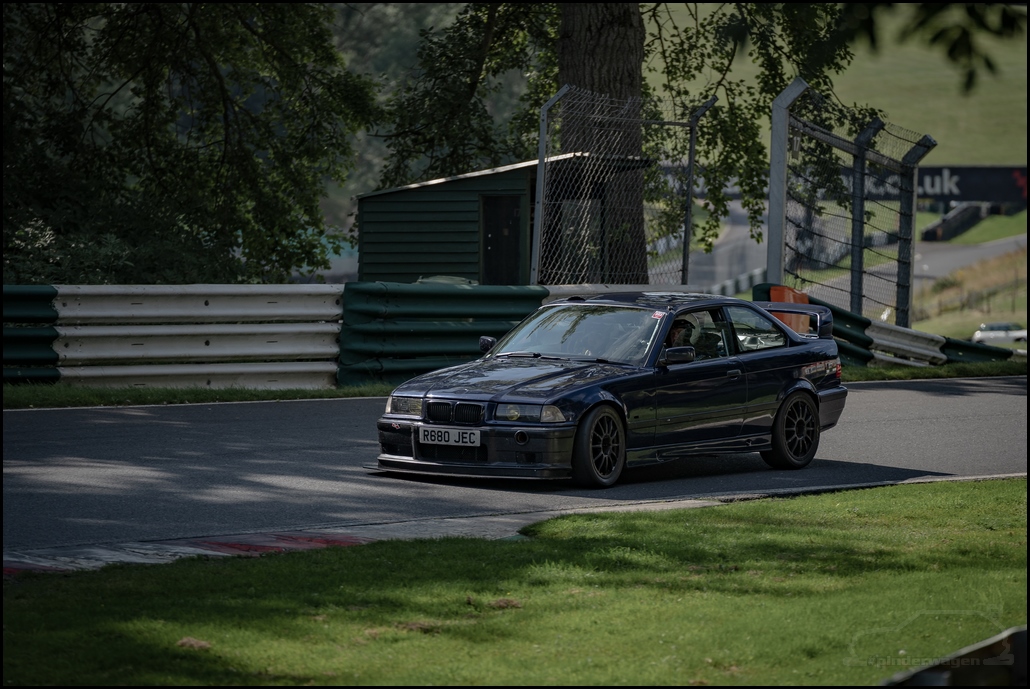 I was able to lap pretty much all the time the track as open, not a single engine or drivetrain issue with the Golf all day 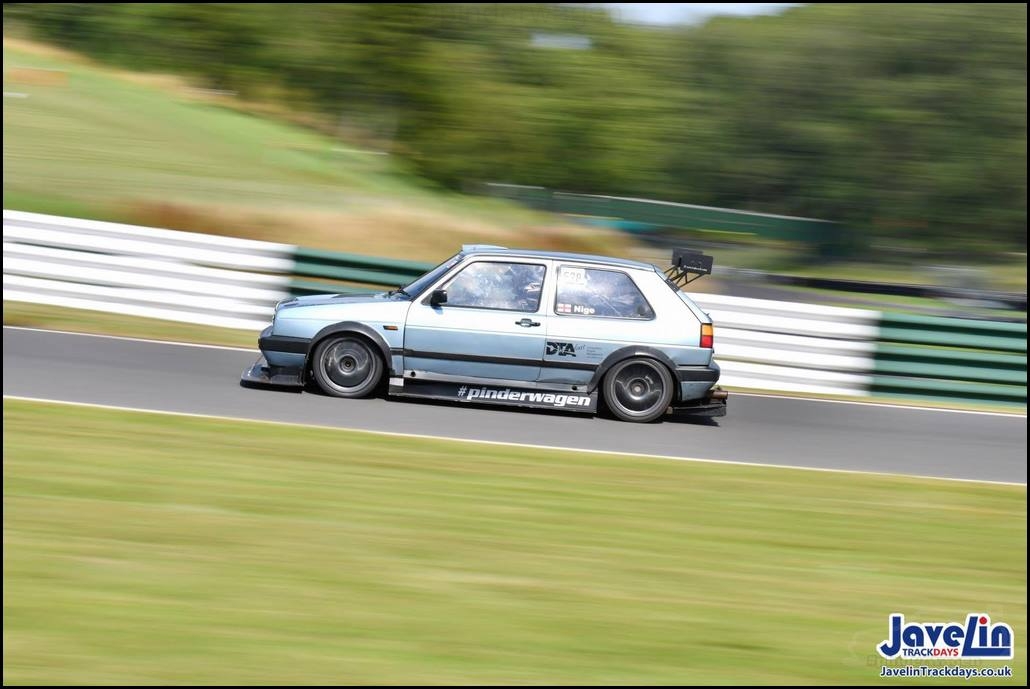 Matt and I have often commented that the Golf just doesn`t handle the kerbs as well as the E36. Even though I’m on ‘better’ suspension, it simply doesn’t soak them up as well as his does. Not a big deal but something that’s immediately obvious to anyone who sits in both cars. 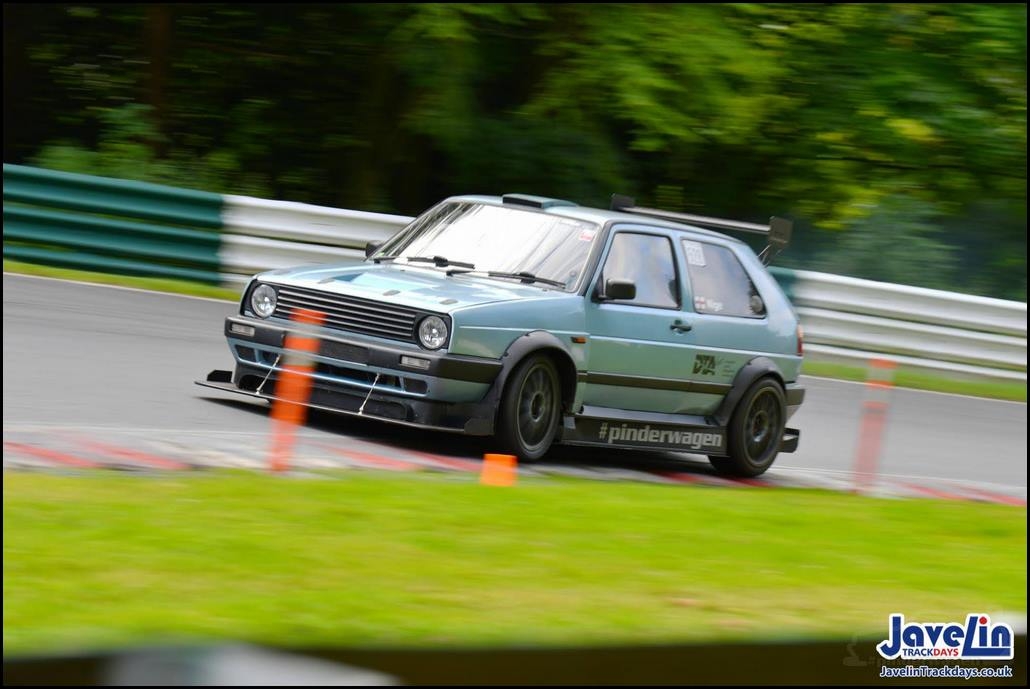 Cat’s boyfriend was there taking some photos, I particularly like this one. Now if only we could move the trees a bit further apart so it doesn’t chop the splitter and diffuser off 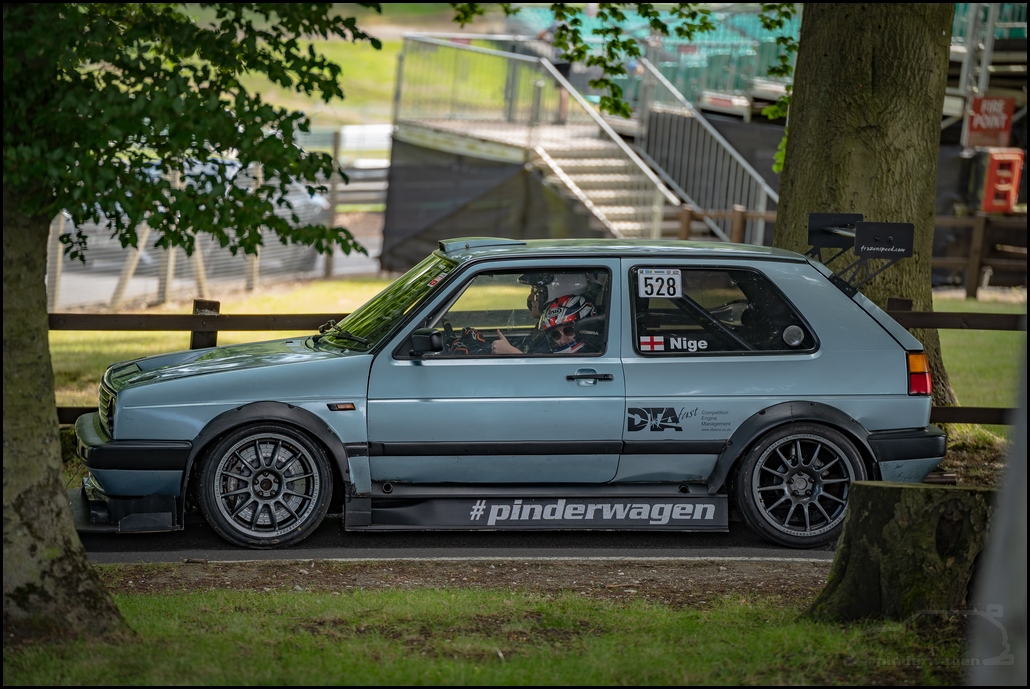 We’d commented on the slight dip in the tarmac turning into the mountain during the trackwalk but it was something I’d never felt in the Golf. I’m not quite sure how Matt was able to get the wheel this high in the air ! 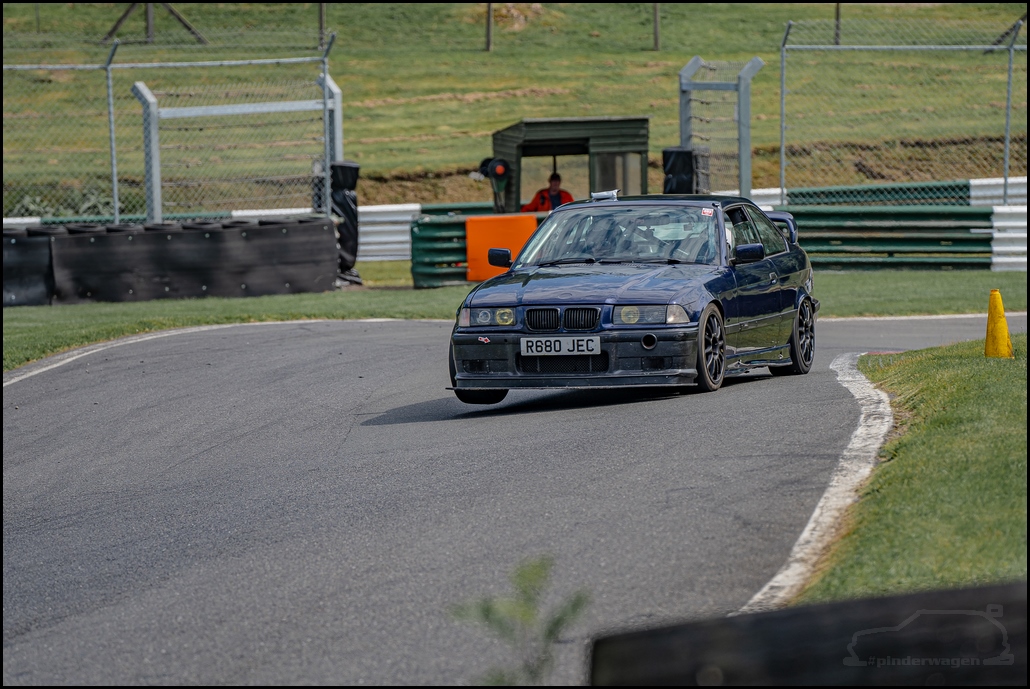 After loading up I had a shower before setting off home. When it has been such a hot day like today, it really does freshen me up before driving back. Not all circuits have showers available but they are fantastic on days like this.

Today was a great day, I did loads of laps and the Golf behaved itself. I seem to be saying that more and more right now but being able to do days like this where all I do is put fuel in and drive makes the days so much more enjoyable. I’ve had people comment that enjoy repairing it when it breaks. That’s not quite the case, I get satisfaction when I am able to repair a trackside issue but I’d much rather it was reliable and I didn’t need to repair it at all. 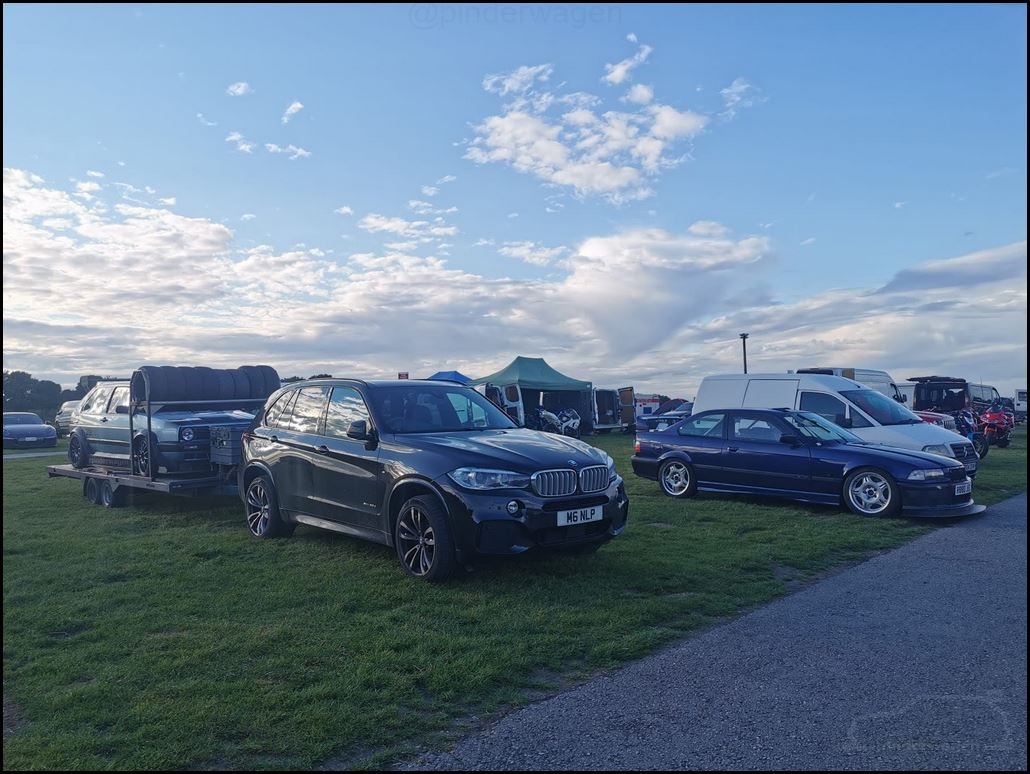