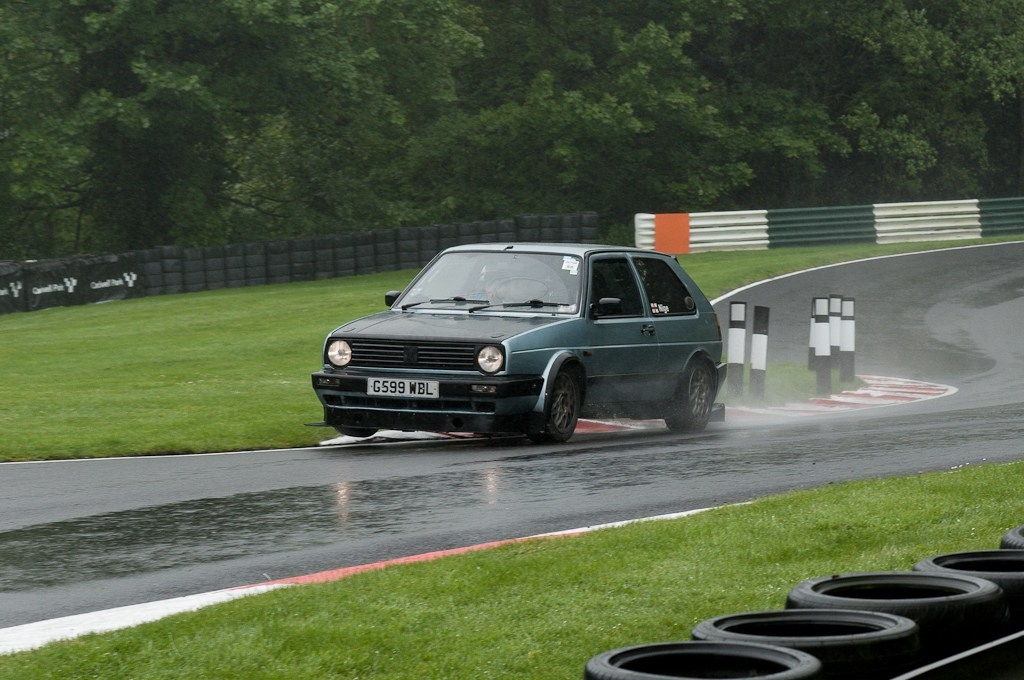 The car was mapped and ready for Cadwell park. We drove over Wednesday afternoon. The plan was to drive over earlier, but as it was raining, we didn`t see the point in going early just to sit inside.

Arrived and setup the tents in record time.

Ian Howell had suggested we go to a pub for a meal instead of sitting round the tents and a fire. Seemed like a good idea to us.

Found a pub in Louth, rang Ian and Gurds & Family to let them know where it was, but Ian`s B&B was 30miles away, so he couldn`t make it. Had an enjoyable evening with Gurds and family

Woke early on Thursday to see it was still raining. Decided fitting the wets would be a good idea, it was far to damp for my worn A048`s

Briefing over, went out for a session and was black flagged before completing a lap !

I was losing `oil or fuel`. Soon as I opened the bonnet I knew what it was. The rocker has a small weep that I STILL can`t stop. I put a sheet of oil absorbent material next to it and it soaks a day`s track use easily, but I`d degreased the engine bay on Wednesday and not refitted the matting.

Refitted a new piece (this is only temporary until I can stop the leak !) Once done and degreased, the car didn`t put a single drop of oil on the circuit / carpark for the rest of the day

Screen was given a fresh layer of Rain-X Antifog and out we went. Actuator pressure only for the first session and not an issue at all.

Gurds was learning the lines. No puddles, but plenty water around. As it was raining, Lou didn`t stay out long, so no photos of Stu or Gyros, sorry guys.

It would slow to a light drizzle, then start again. Switch to the ECU Boost control map, instantly felt the improvement in pickup from low revs and it pulled even harder to redline ! Started using the kerbs a bit more too. Took Ian and Gurds out for passenger laps, we hadn`t completed a full circuit and they both said “I need some wets…”

The Map was really driveable. I could get on the power early, no spike in delivery. It was EXACTLY what I hoped it would be.

Only noticed a lag when a car moved over on a short straight between the mountain and hall bends, I put my foot down, but it took a moment to accelerate, where it would have been instant with the ITB`s.

Boost delivery and AFR was good. Lou filmed a couple of drive-by`s from the entry to Hall Bends.
http://www.youtube.com/watch?v=ReDkdp-9uL0

The diffuser was working really well, I`ll get some photos of the water trails when it`s off the trailer.

You can see the amount of water it`s dispersing from this incar clip from Gurds.

I`ve known Stu for quite some time, he`s done loads of trackdays in his Atom and I`ve never been able to keep up. I`d had a short session behind him earlier, but I was exiting the pits with Gurds and he came passed, we had some great laps and this was an enjoyable session

Water temps were too cool, so was the oil. It`s my fault though….

Had a quick chat with Stu, but we spent a lot of time on track so didn`t have a good talk, sorry mate.

We`d been running the kerb into Hall Bends more and more each lap. I said to Matt “I wonder what it`s like straddling it…” “This is your ONE AND ONLY WARNING… Do it again and you won`t go out again.” OK. Did 230 Miles on track, didn`t use any oil, wore out a wet as it was too dry during the last session

. The day did everything I needed it to. Car was reliable, driveable and enjoyable. After the last 2 days, I really needed this, I breathed a large sigh of relief at the end of the day

As Gurds & Ian had gone, Lizard couldn`t attend, I had no reason not to do a session in the evening. Fitted the A048`s and went out for another 40 miles. Not bone dry, but almost. I think there is a rumbling rear wheel bearing, so I`ll look at that and fit a thermostat.