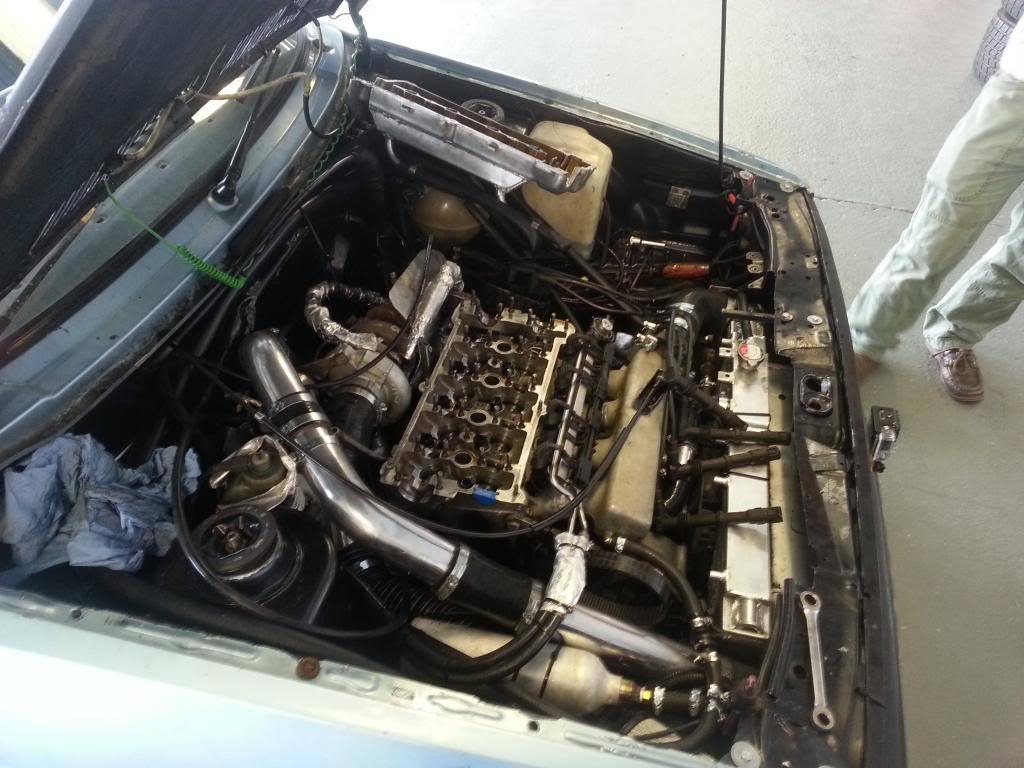 Golf went to Bedford yesterday. I`d organsied a trackday there for ClubGTi. We took 35 cars. After the trouble free shakedown at Rockingham, I was looking forward to this. A lot.

Added diffuser, sorted out the splitter, tweaked the geometry. All ready to go.

Went out with Prawn following me, the plan was for me to drive steady(ish) and him follow to get an idea of lines.

Out lap, I accelerated hard down the main straight, up to 132mph. The Golf has NEVER gone that fast before ! Unfortunately, Prawn sat on my bumper the whole time. Hmmm…

Anyway, did that outlap, then going round the first `flying lap`, I noticed the oil light flicker in the left handers.

Asked Matt to watch the gauge in the next left hander, I kept the revs low just incase.. “It went to zero…” was the reply. Oh. Bugger. Slowly back into the pits, oil gauge never flickered again. Checked and the oil level was low, doh

Topped it up, went back out.

Did 4.5 laps and it was fine. Oil pressure rock solid, NO noises or anything untoward. Well, apart from my lines and braking points. I need to relearn those.

Unfortunately, halfway round lap 5, we slowed for the hairpin and both heard a bit of a tapping noise. Slowed and it was noticeable, so slowly back into the pits. Oil pressure never flickered at all. Matt was watching it on all the corners and it flickered to 4 bar, but no lower.

Back in the pits and it was obvious there was something not right. A very unpleasant knocking / tapping noise. Obviously, first thoughts were lack of oil had caused a problem with the bottom end, but the noise was really tappets and from the top.

Listened with long bars and I was certain it was coming from the top.

There were several VW enthusiasts there who`ve done far more work on VW`s than me. Every single one who came for a look, without exception said “Sticking tappet”. That was without knowing what anyone else had said before them.

I said “what about a big end bearing ?” Nah, it`s definitely top end was the unanimous response.

That spurred me on to have a closer look. For the first time in YEARS, I didn`t have my compression tester with me

. (I looked just now and can`t find it in my garage either

So, Cylinder No1 to TDC, check marks on cams. All line up

Remove Cams. Everything was HOT. You couldn`t hold a nut in the palm of your hand, it burned ! Split followers. What a Pain in the backside that job is ! Check operation of spring / ball bearing. All appeared to be fine. Washed everything in Petrol anyway and reassembled. Refitted cams, timed it up, removed plugs and disconnected injectors.

Turned it over to build oil pressure, then replaced plugs and restarted it. Exactly the same

By unplugging the injectors, it seemed Cylinder #1 lost fewer revs when disconnected, suggesting it wasn`t doing as much as the other 3.

Took the plunge and rang local GSF. They had some in stock. Talked her into doing them trade price for me and Andy Jebson VERY kindly drove over to GSF to pick them up whilst Hayley & Colin were left as the sole Javelin staff at the venue.

Fitted brand new followers, rebuilt it all again and restarted it.

That was day over, it was now after 3pm and I`d done 6 laps.

“well, at least you haven`t used much fuel” was one helpful comment..

Car back on the trailer and now home, where I won`t be able to touch it until next week.

Gareth, after watching the last 10 seconds or so of the above video said he thought it was the bottom end, probably a big end bearing. I hadn`t told him about my oil issue, I don`t want to skew peoples diagnosis by giving them more information such as the low oil flicker which would naturally make them look for a problem in that area

If I can find my compression tester, I`ll do that. It MIGHT point to a different cylinder, if so, I`ll fit 4 tappets to THAT cylinder instead and check. worth doing incase I just changed the wrong 4…

However, I don`t think that`s the case, so it`ll most likely be engine out, oil out and checked, sump off and check the mains. Looking most likely that it`s a spun main bearing.

If not, head off and check valves / guides / springs. I`m avoiding this if possible, I don`t want to split the head from the block if I don`t need to.

If it`s the crank, I`ll either fit my spare or see if this one can be saved, polished and fitted with oversized bearings, I`ll speak to my engine machining place tomorrow for a price. I suspect it won`t be economically viable to do that with a whole ABF engine going for £150 to £200. More likely, I`ll fit my spare crank and another set of new big end bearings…

I have a spare head, so that could be swapped if it`s a head issue.

No matter what it is, I`ll fix it.

A big part of me hopes it`s nothing I`ve done. A cracked valve guide or failed follower in another cylinder would make me feel much better.

If it`s a main, I`ll be even more fed up as it`s something I`ve worked on, but I honestly don`t think it`s a rebuild fault, more likely a lack of oil when the level was low.

There won`t be any updates until next week, I simply don`t have a free day to look at it until then and I`ve used up my `garage time` when Lou`s at home.

Next outing isn`t until Snetterton in May, so I`ve got ages to diagnose and fix this issue.

Sump baffling will be improved regardless of the fault. I`ve had the oil gauge flicker for a couple of years when the oil level is REALLY low, but it`s never flickered this low before. Gurds has improved the baffling on his to reduce the oil `sloshing` under hard cornering. It`s the left handers that do it, they send the oil to the opposite end of the sump to the pickup.

Anyway, that`s assuming it is a low oil issue. It could be something else entirely. We`ll see soon.

Looking at the data, on my 3rd lap of the day, I went 4 seconds quicker than I`ve ever gone round Bedford in my Golf. That`s without starting to nail the braking points and corners. Also without the boost and the spark optimised. ! Checked Mains, all good. This is the worst, a tiny bit of pickup, but nothing really… That meant I needed to take the head off. All looked good. Absolutely NO signs of det on the pistons Head looked fine too. A lot of carbon, but it was idling a lot at Bedford. No det marks on the head either. Turned over the cams with the main pulley and each valve opened and closed with it`s partner and the same amount. Hmmm..

The oil looked OK, but has a tiny bit of metal. Let`s check the oil pickup. This looks familiar. This looks familiar, it`s a circlip for holding the gudgeon pin into the piston. All good, apart from Cylinder #4 Other side is intact. This is how it should look, sat in the groove on the piston. The outer ring has broken off, allowing the pin to drop out. The end of the gudgeon pin had been damaged. Against the bore wall A lovely groove down the side of the bore. So. That`s it folks. A broken piston securing ring that allowed the circlip to drop out and the pin could then hit the side of the bore.

My foot had a bit of oil on the sole, I`d wiped it off, but must have missed a bit. I slipped off the clutch whilst going up through the gears, in the video, you can see both Matt and me look down at the pedal afterwards. This caused the Engine overrevved to 8,140rpm The rev limiter is set to 7,400rpm. The fuel and spark is cut, but too late. I`m not quite sure why that happened ? Maybe the throttle and boost meant it revved so quick, the ECU couldn`t catch it in time I suppose, in the scheme of things, it`s not that bad. I was lucky with the low oil pressure at Bedford which I`ll be sorting with better baffles. My Map was obviously good, there was NO signs of damage due to mapping.

I have 2 months to source the Pistons (or a complete engine if they are too expensive), get the necessary machining done and rebuild it before Snetterton.

Oh, and I`ll also have the larger injectors and ECU Boost control working by then

FINALLY! 😀First trackday of 2021 tomorrow after