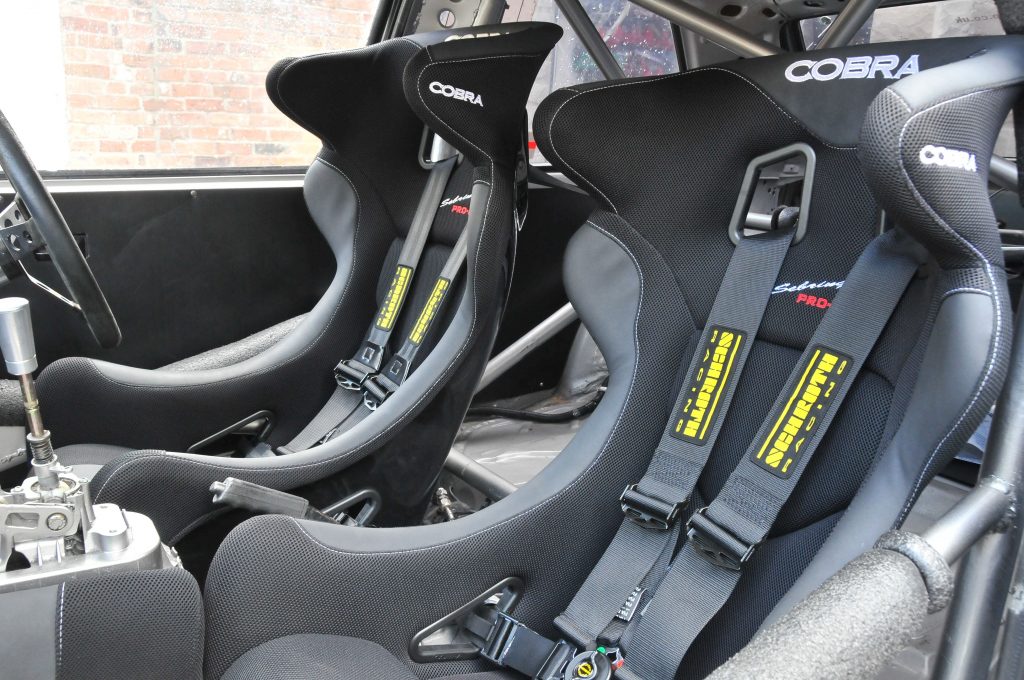 The blowout at 130MPH made me think about just what could have happened if I`d hit something so we agreed new seats and harnesses were long overdue.

I went to the Autosport show in January and sat in loads of seats and the Cobra Sebring Pro`s were the comfiest. Particularly with their Pro-Fit system where they have several thickness of cushions that can customise the seat for you. This worked really well and an order was placed.

Mark, the owner at Cobra introduced me to Chris at Schroth who sorted me out with a pair of Profi-II 6 point harnesses and 2 Hans devices for Matt and myself.

The orders were placed and then I waited.

First to arrive were the seats. 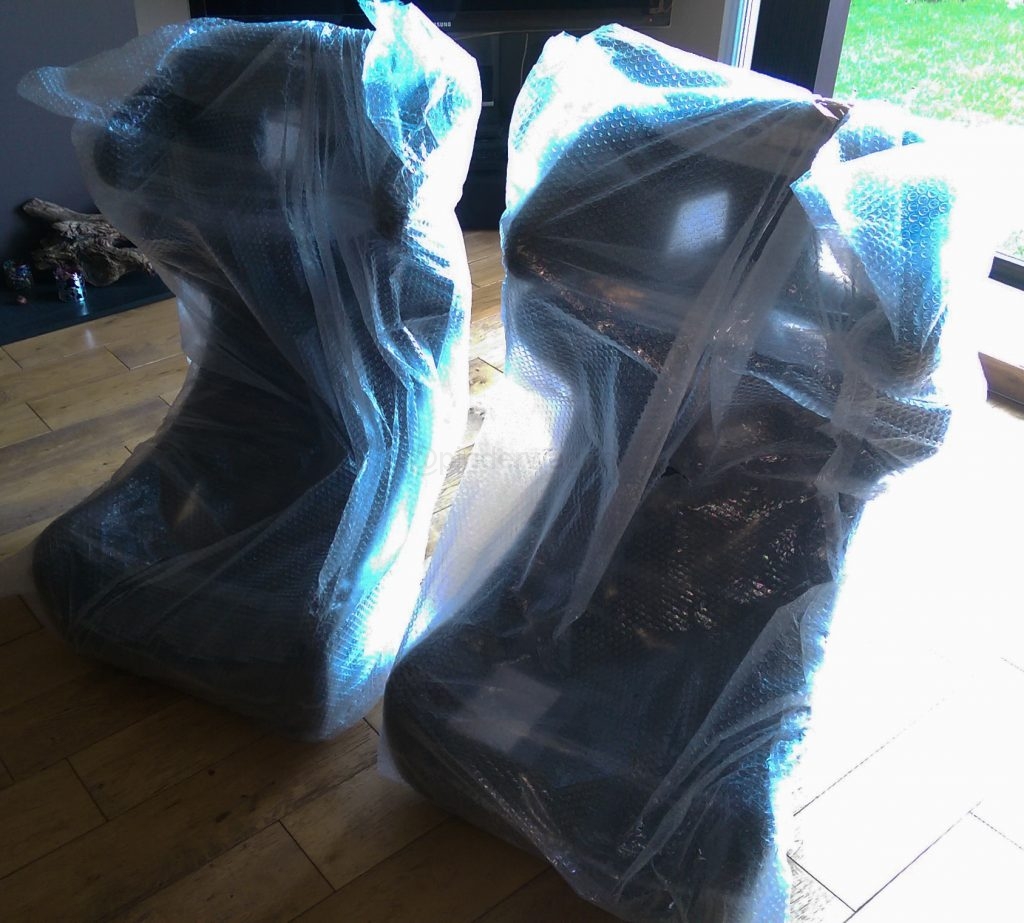 When I shared this photo, a lot of my friends said they looked narrow and would a `regular` sized passenger fit ? I assured them they were XL width and that wouldn`t be an issue. 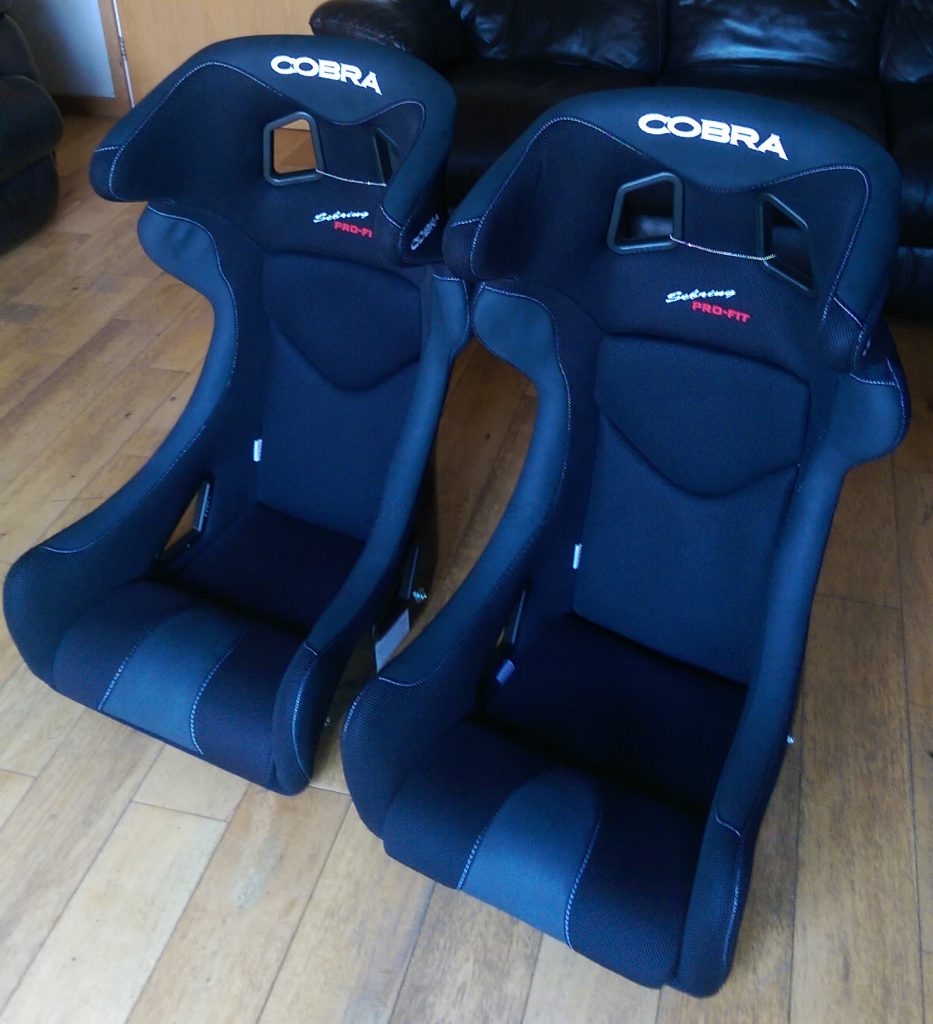 They had the side head protection and were Hans compatible 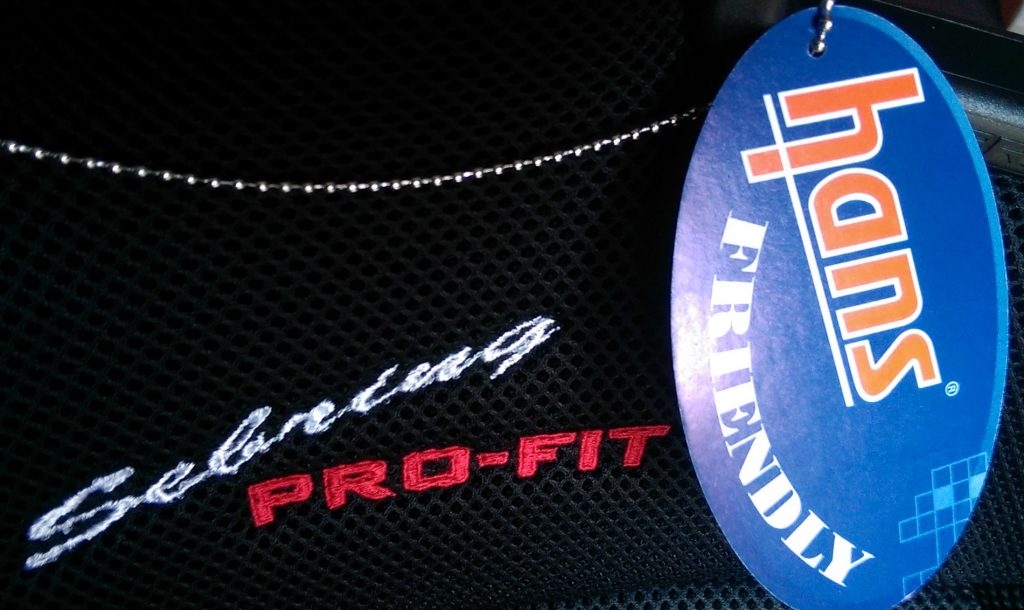 After a few issues getting the harnesses shipped across, they arrived just in time for Rockingham. It`s always exciting opening boxes with new bits inside 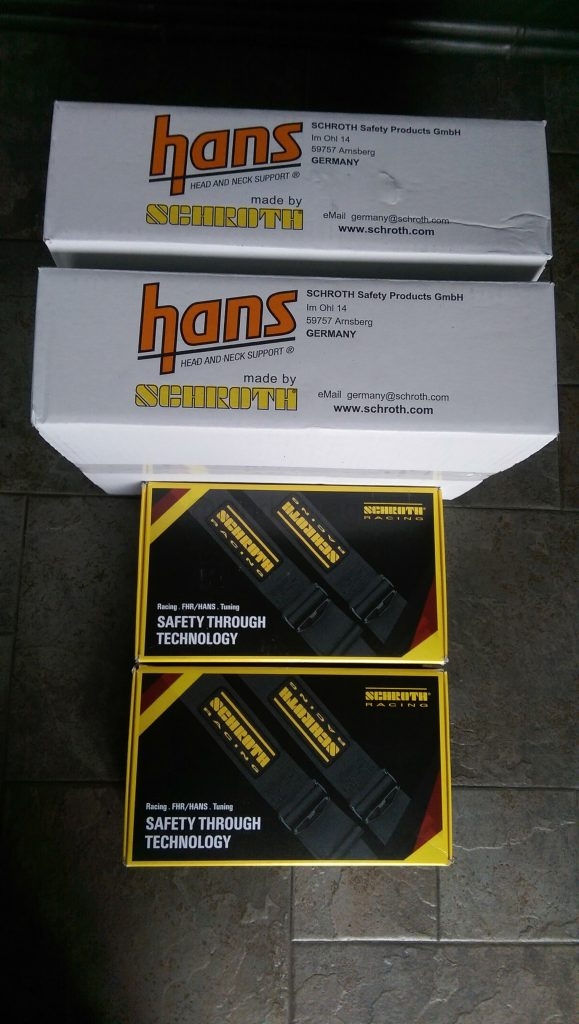 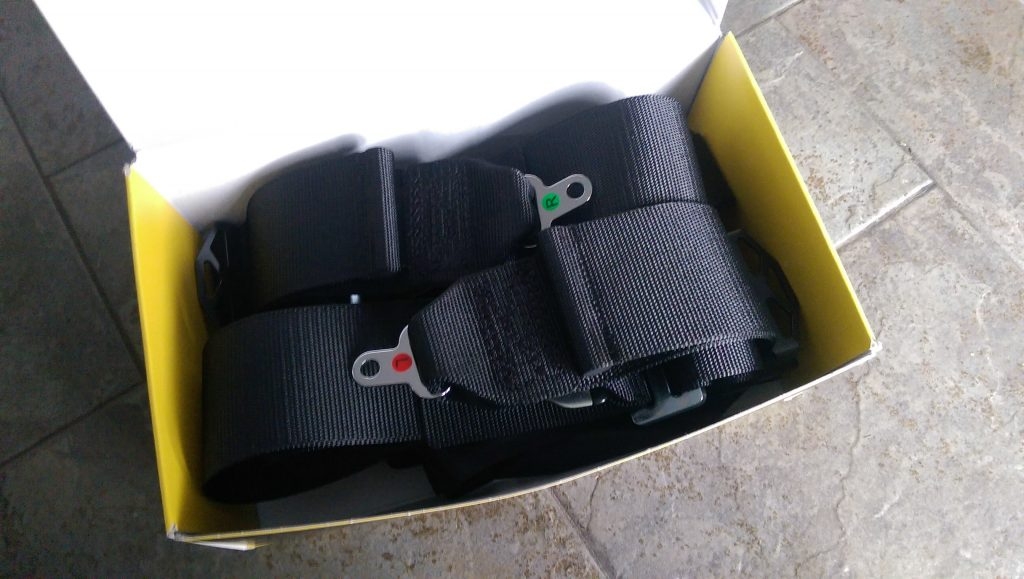 If you`ve ever tried adjusting the crotch strap on a standard 6 point harness, you will know what a pain it is reaching under the seat to unhook the straps, removing them to adjust and then refitting in the vain hope you got it right first time. 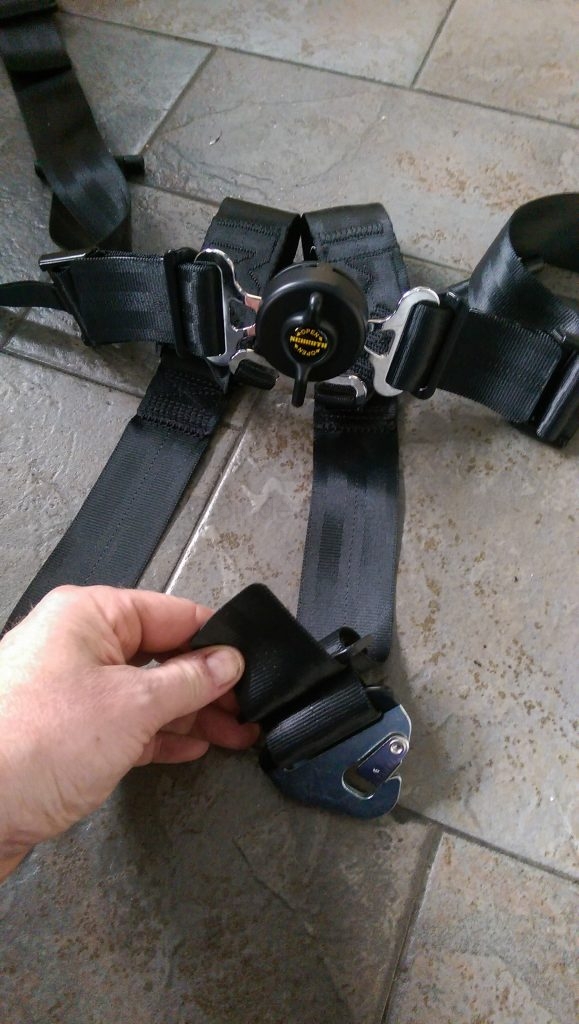 The Schroth harnesses have adjusters on all 6 straps. What this means is that you get it somewhere near to the length you need using the usual adjustment but then individual tailoring for passengers is done by simply pulling or releasing the adjusters on the belts. It`s SO much simpler ! 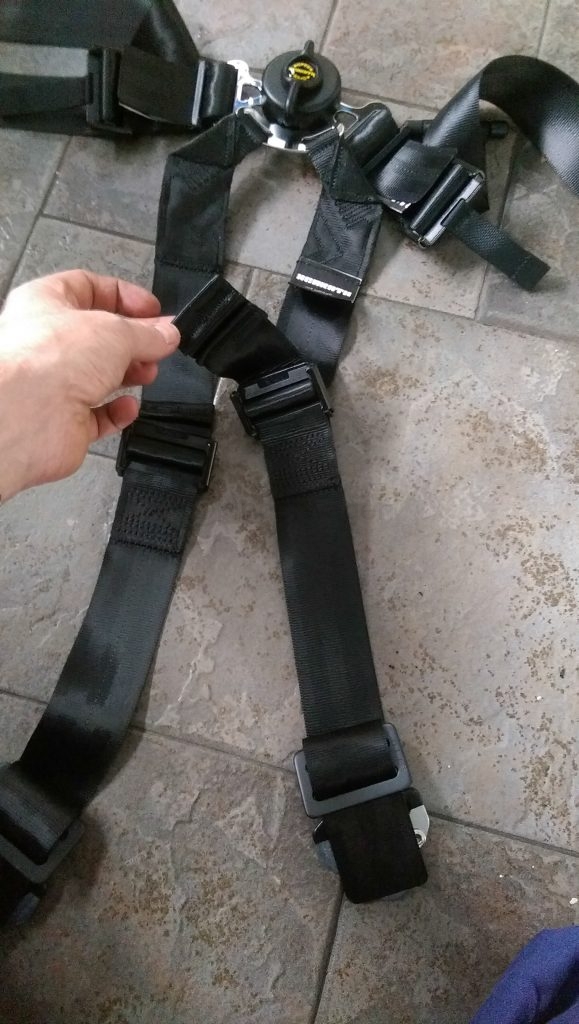 This video is one of the best examples of why a HANS device is useful in the event of a crash.

I`d settled for the Schroth XLT 20 in Medium 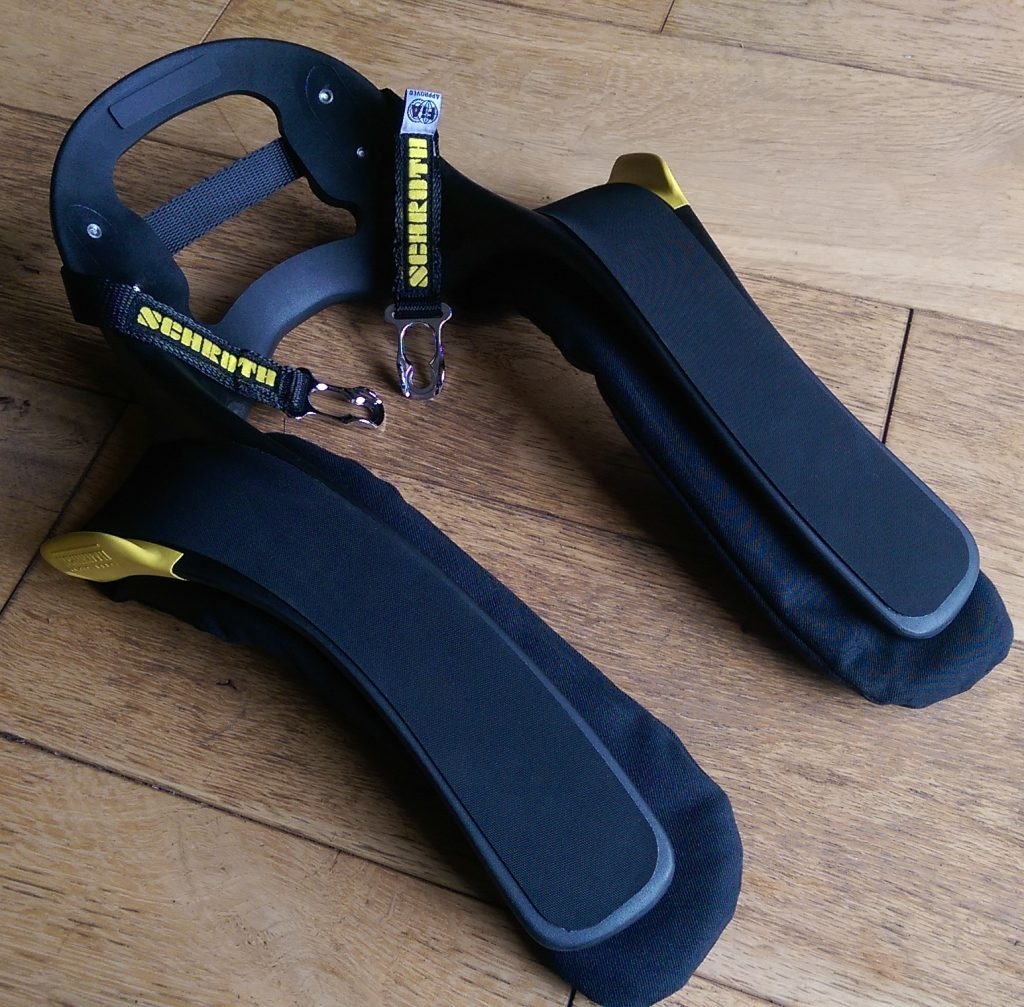 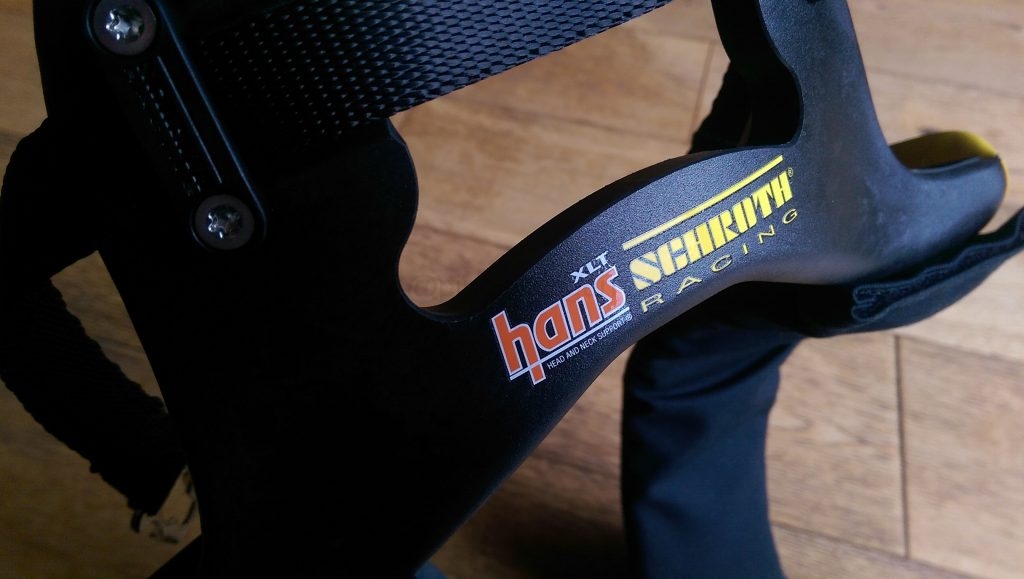 This meant I also needed a new helmet. After trying on literally every single Open face HANS compatible helmet at Autosport I settled on the Bell Mag-1 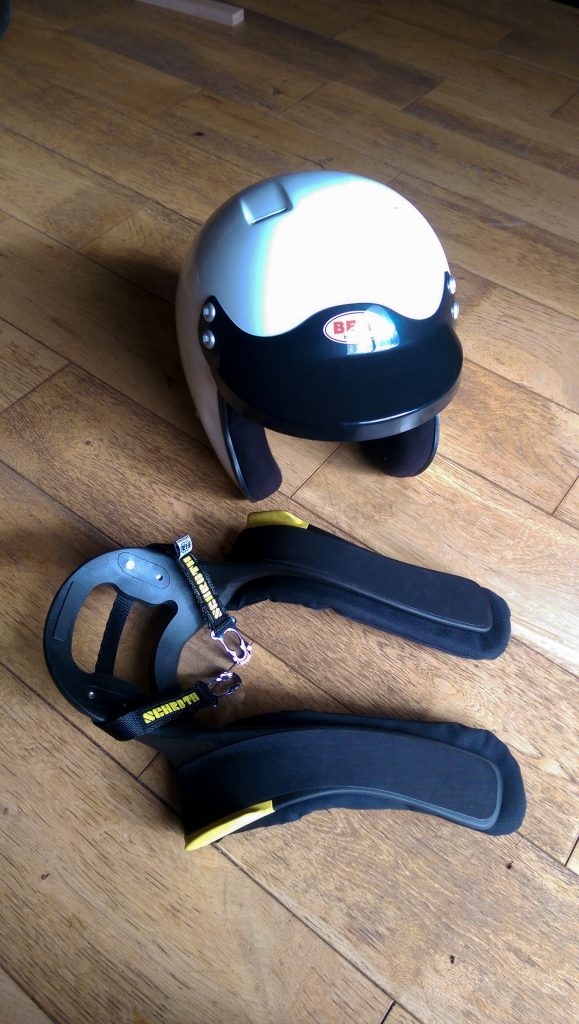 It came with the HANS posts pre installed 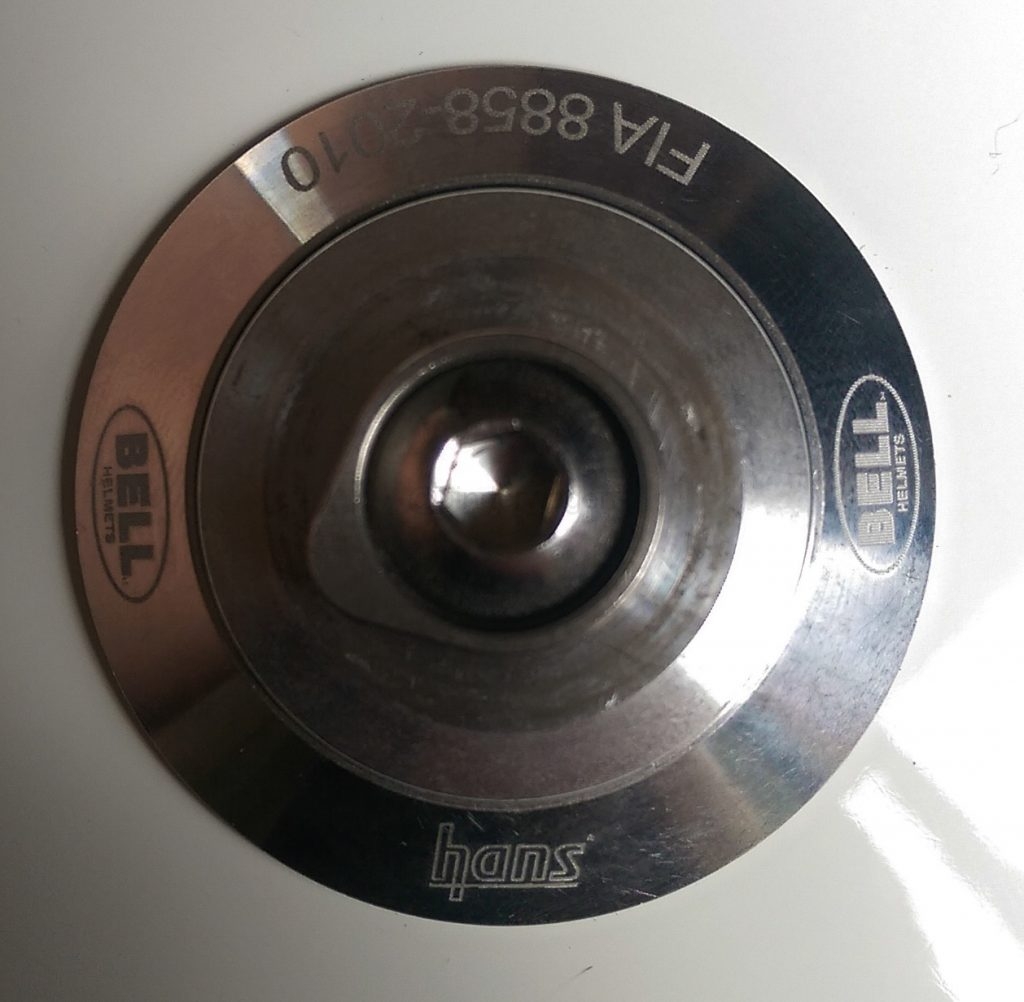 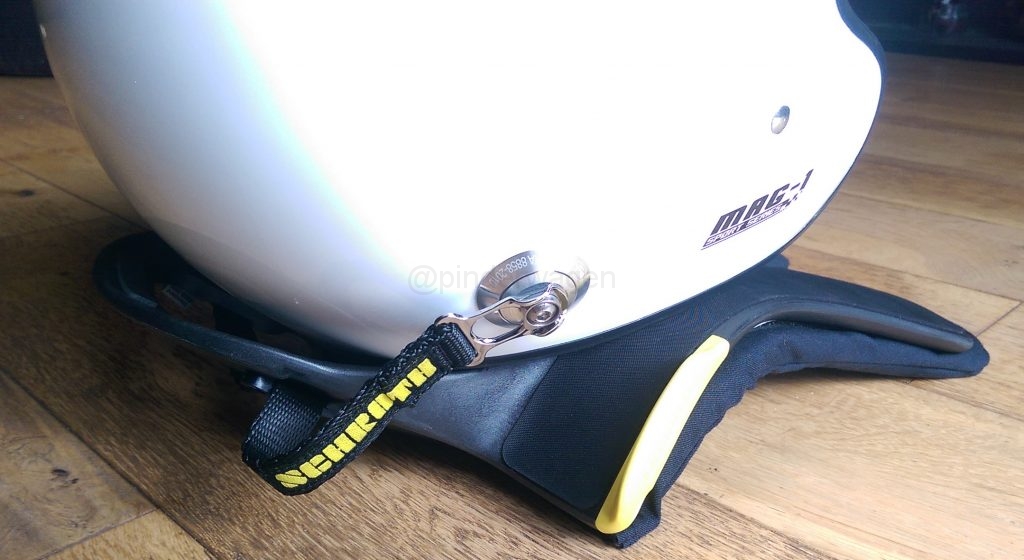 The seatrails in the Golf were removed and new ones welded in that were lower and further back. I wanted the passenger seat to be as low as absolutely possible 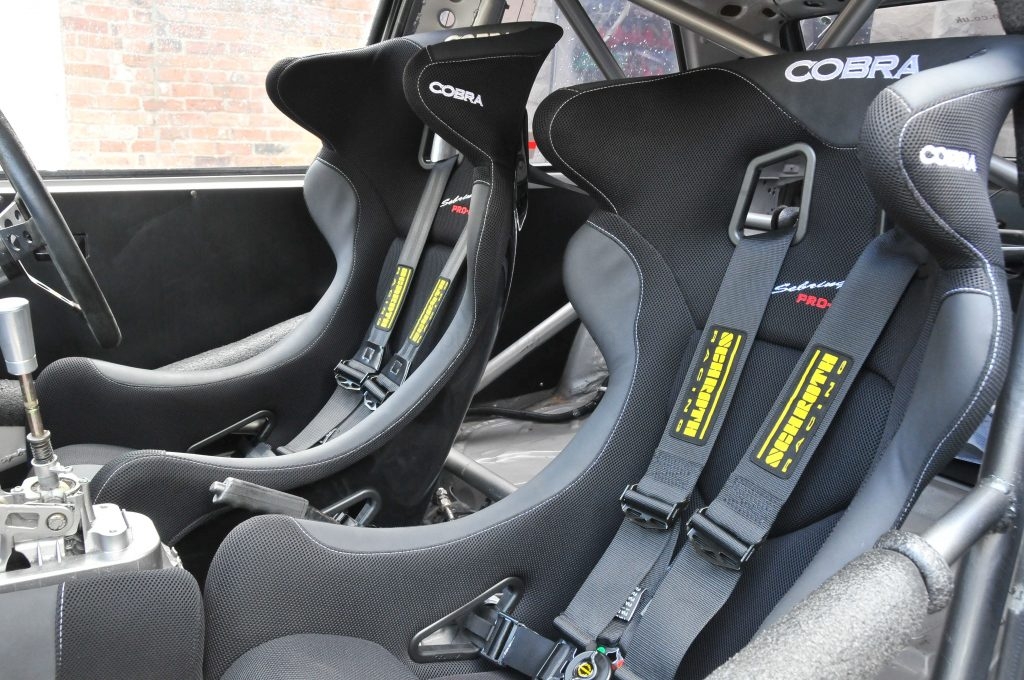 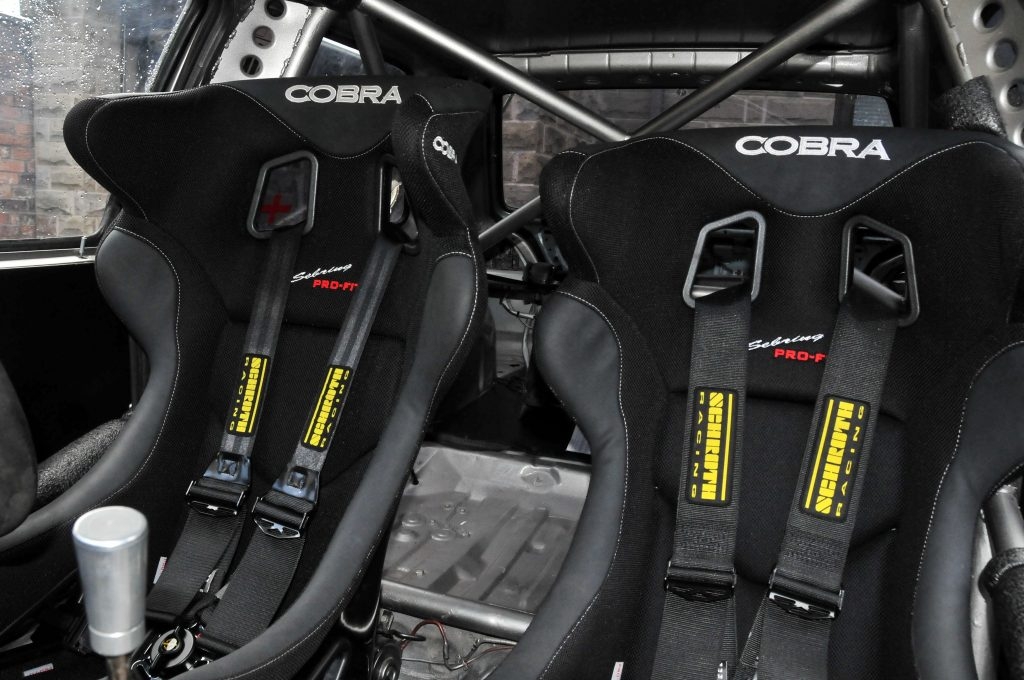 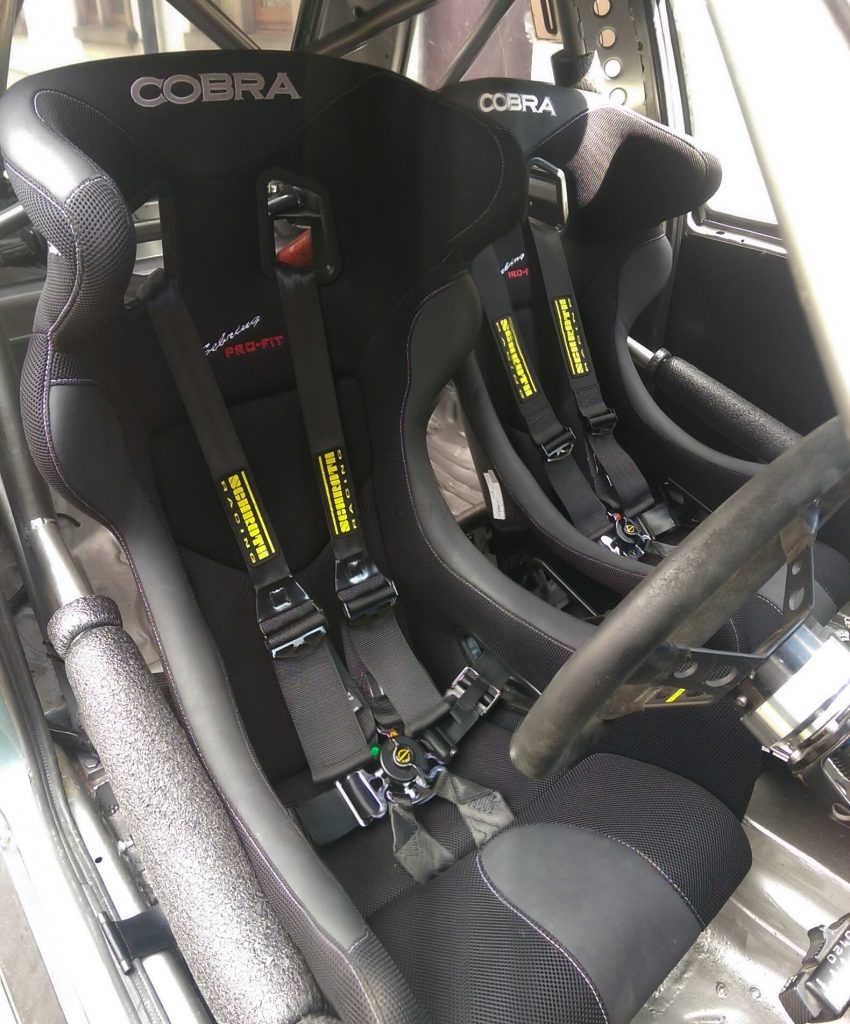 This shows how much further back I was able to position the passenger seat in relation to the drivers one. 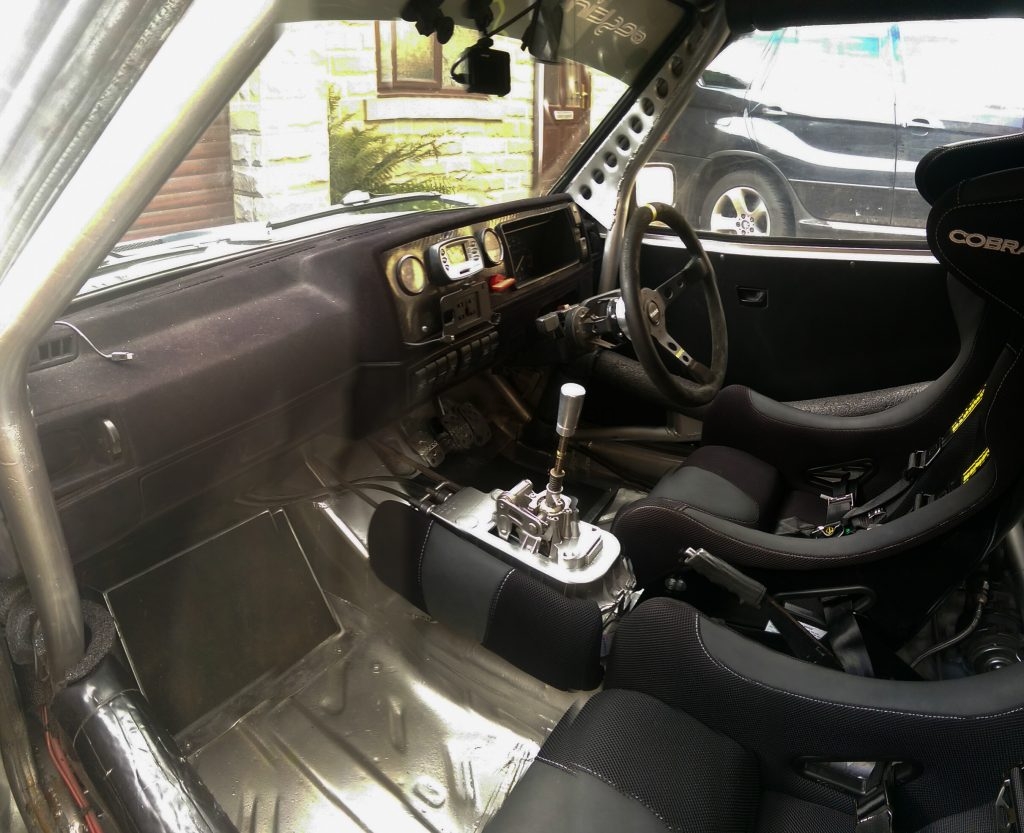 I cut down a spare seat cushion, made a 3mm plywood backplate and fastened it to the frame 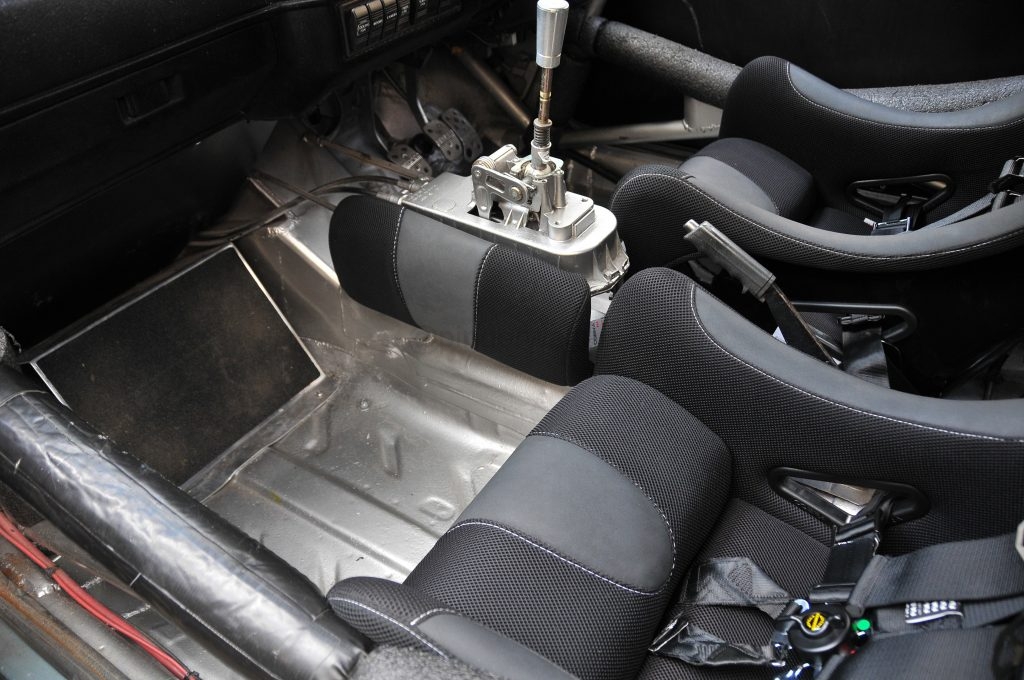 Much better and it should help passengers brace themselves easily. 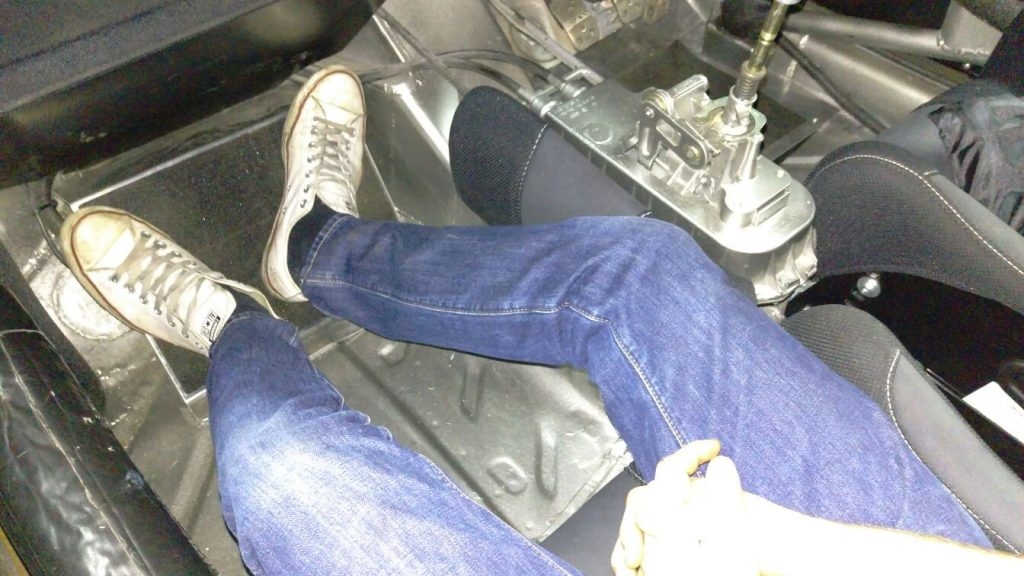 The distance between the rear of the seat and the harness bar meant the harnesses have to be crossed. 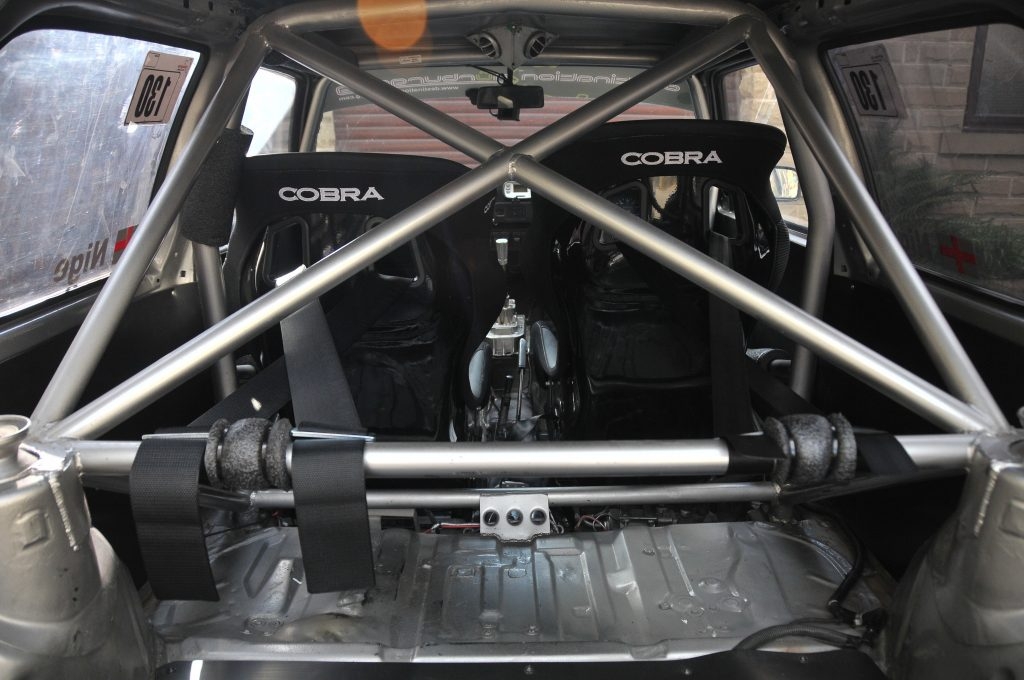 A lot of people sat in the seats at Rockingham and were unanimous in there feedback. they were very very comfortable, even for the larger gentleman and the new seating position was spot on. The harnesses were simple to adjust and the combination of the seats and harnesses really smartened up the interior.