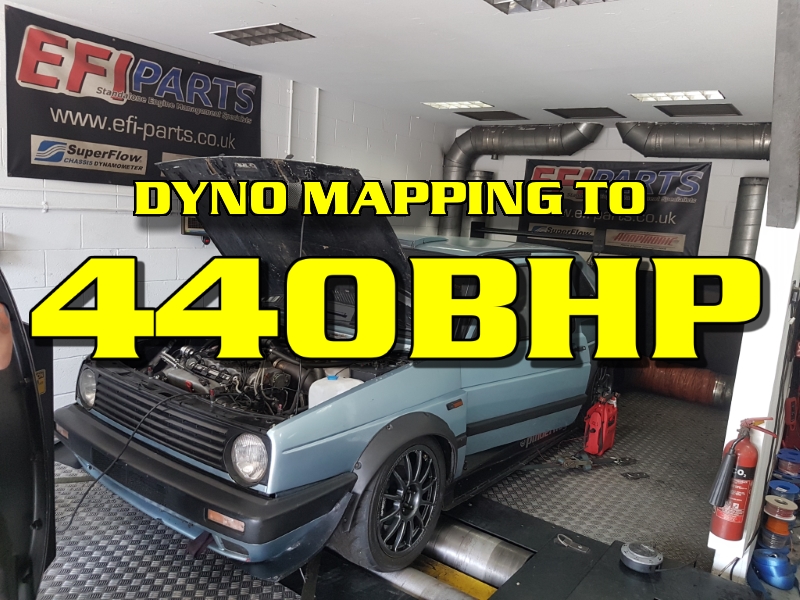 Arrived at EFI-Parts for Chris to map DTAFast S80Pro ECU on the Golf with the new Owen Developments GT2868HTA turbo I’d fitted. This is a used turbo from a BTCC race car. They don’t run them until they break, but replace them after a certain amount of hours and fit a new one. That means turbos like this keep popping up on the 2nd hand market. A quick visual inspection showed no signs of wear at all and the play in the bearings was imperceptible. 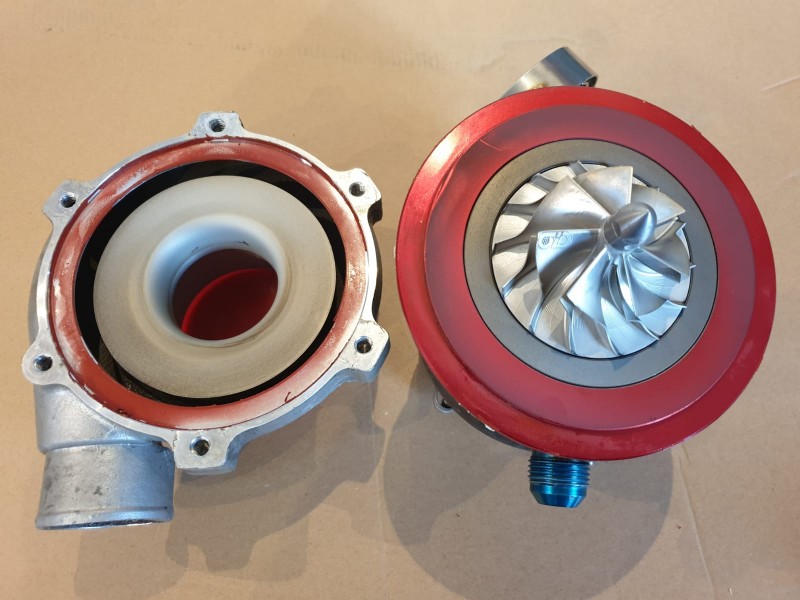 Splitter removed to allow it to fit  on the dyno 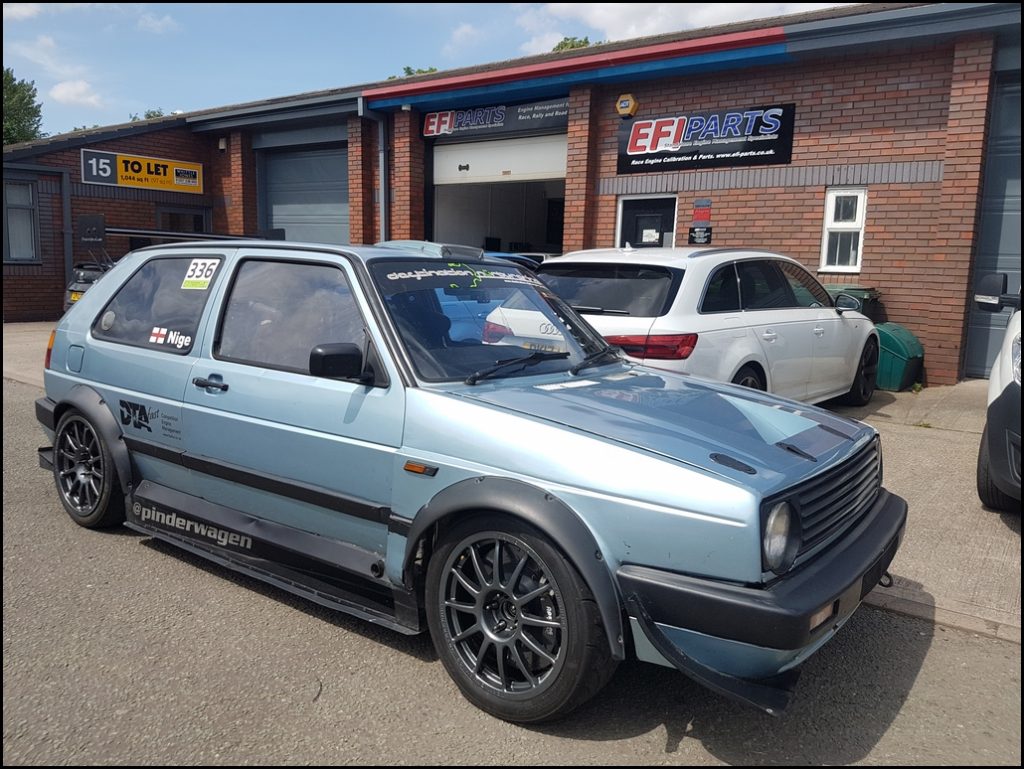 Drove in and strapped the Golf down, MAP and knock sensors attached to the engine, AFR in the exhaust. 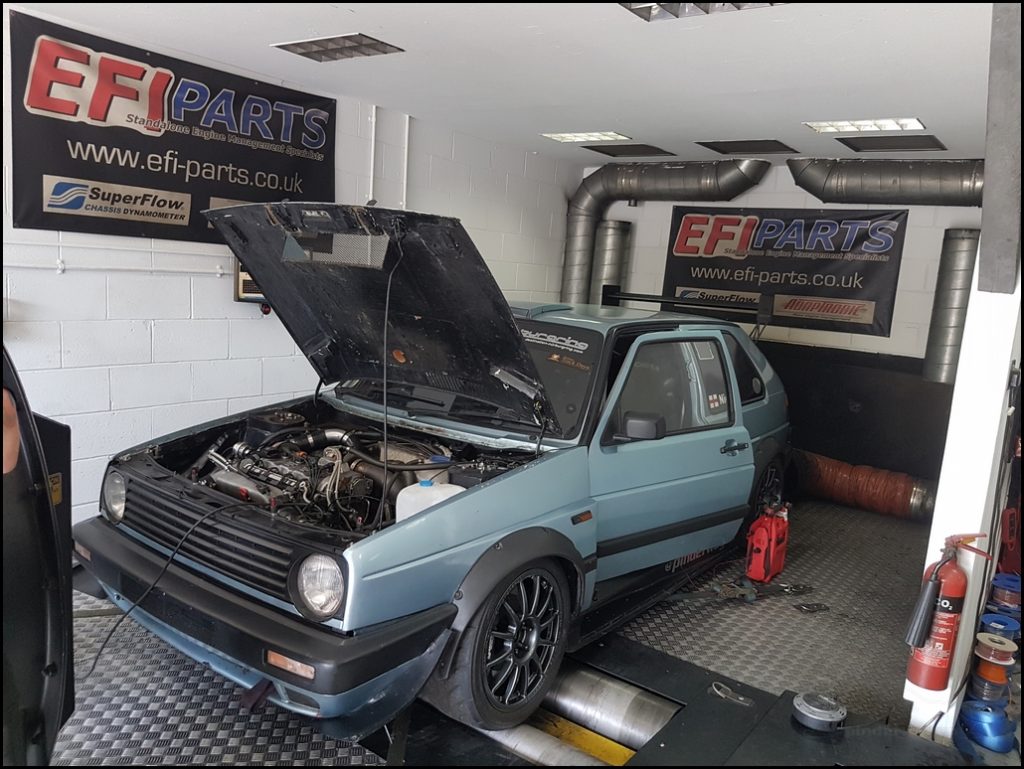 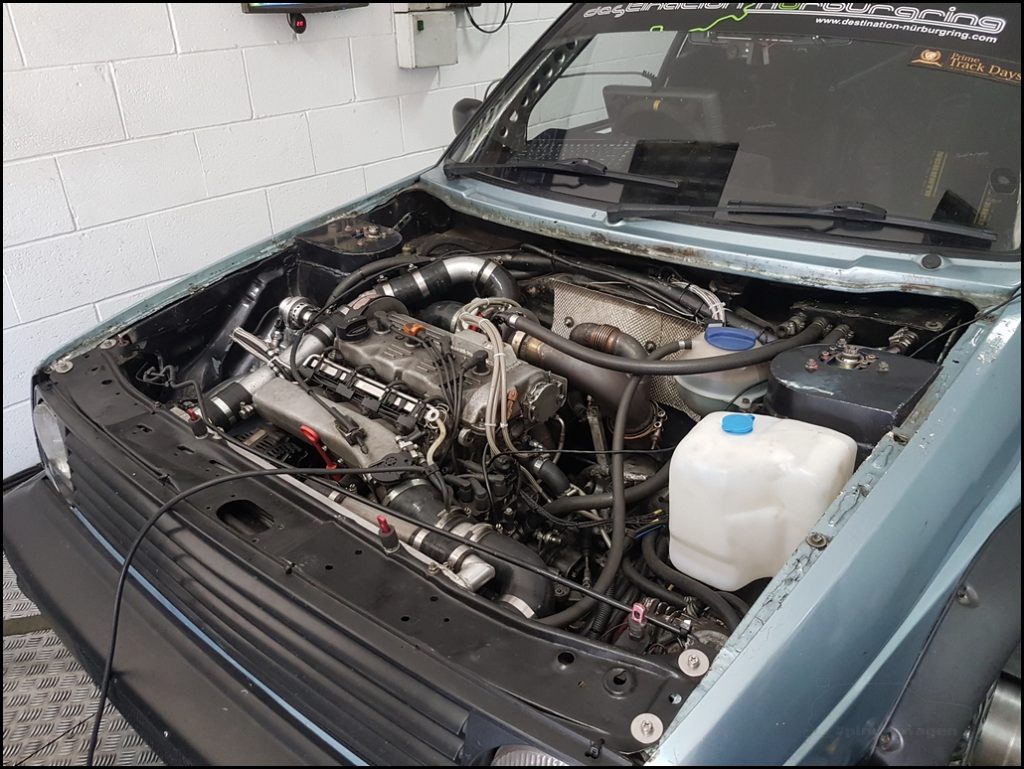 I had swapped from the Siemens 630cc injectors to some Bosch 900CC ones. The old ones wouldn’t be able to supply sufficient fuel for the new turbo. That meant Chris had to spend a little while tuning the part throttle and off boost area of the tune before any power runs. The DTA fuelling table allows precise injector pulsewidth changes and Chris was able to use this to get a really smooth idle and great low throttle opening response.

First power run on actuator pressure only and I saw it was reaching 0.75Bar. Hmmm, this was supposed to be a 0.6Bar spring. Nothing I could do on the dyno so I`ll see how it goes, but can always change the spring later if I find it’s too much in the wet or low gears.

A very healthy 309 HP, but torque has no assistance so drops away as the revs rise. It’s still almost 310HP which is pretty damned good. 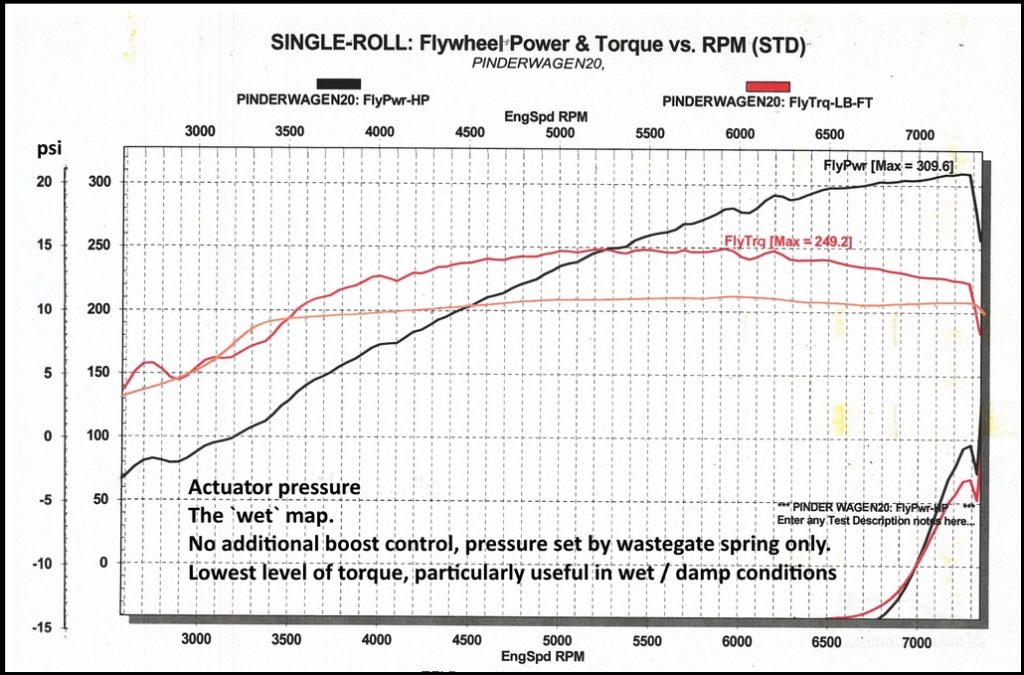 Previous dyno runs with the identical engine but on the TD04HL-19T. We didn`t spend a great deal of time tuning the torque delivery on the dyno and as can be seen on the plot below, it tapers from 275 lb-ft to 240 lb-ft at redline. 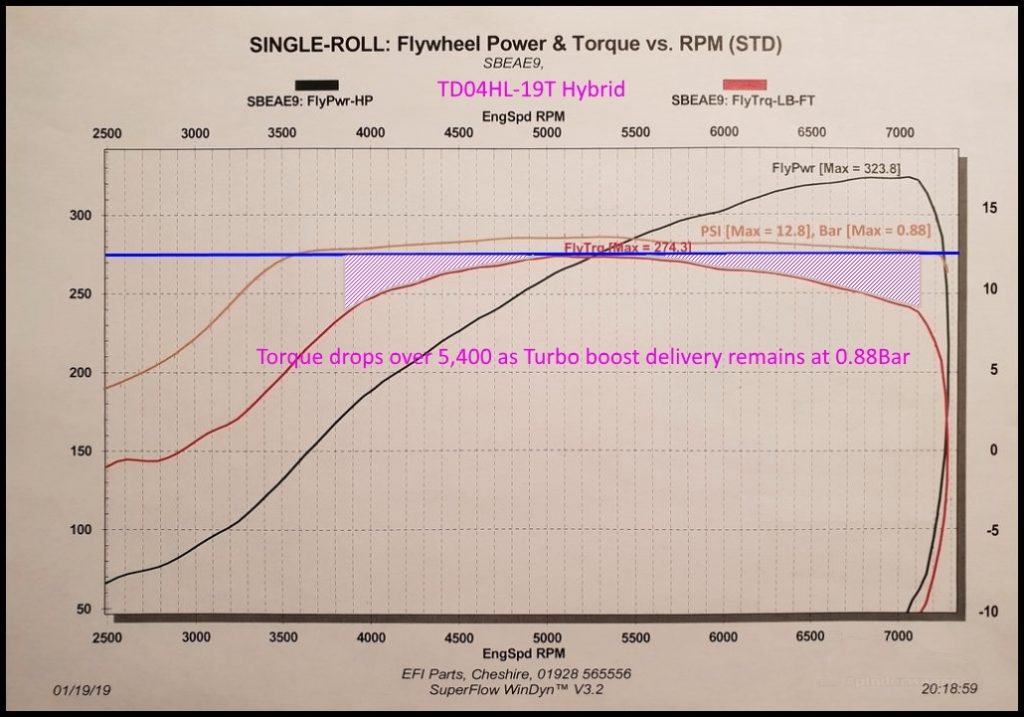 I showed Chris this old plot and explained how driveable it was and even peak torque didn’t break traction (or CV’s !) Chris used this as a limit for the new map and said he wouldn’t exceed 280 lb-ft.

This is why I drive across to Liverpool for the mapping. They are plenty dynos nearer to me but Alex recommended him and I can see why. He knows what I want and why and doesn’t try and talk you into accepting something you don’t want. He understands my boost delivery preference of raising the boost to maintain torque rather than just getting whatever the turbo can give.

We upped the duty cycle on the boost control table in the ECU and within only a few pulls we had a map where the torque was the same as the old Turbo, but it held rock solid all the way to redline. This will make it very driveable with such a linear power delivery.

Chris commented the engine felt very ‘numb’ to timing. By that he meant that even with a swing of 4 degrees advance or retard, the power was virtually unchanged. He’d never come across an engine that behaved quite like this. It was also incredibly resistant to knock, it needed a large timing swing to detect any detonation.

This gave him a large window in which to tune for low EGT’s without any chance of knock. All in the name of increased reliability which is what I explained was top of my list. Headline figures are OK to talk about in the pub, but they don’t actually mean anything, driveability and reliability are far more important to me. 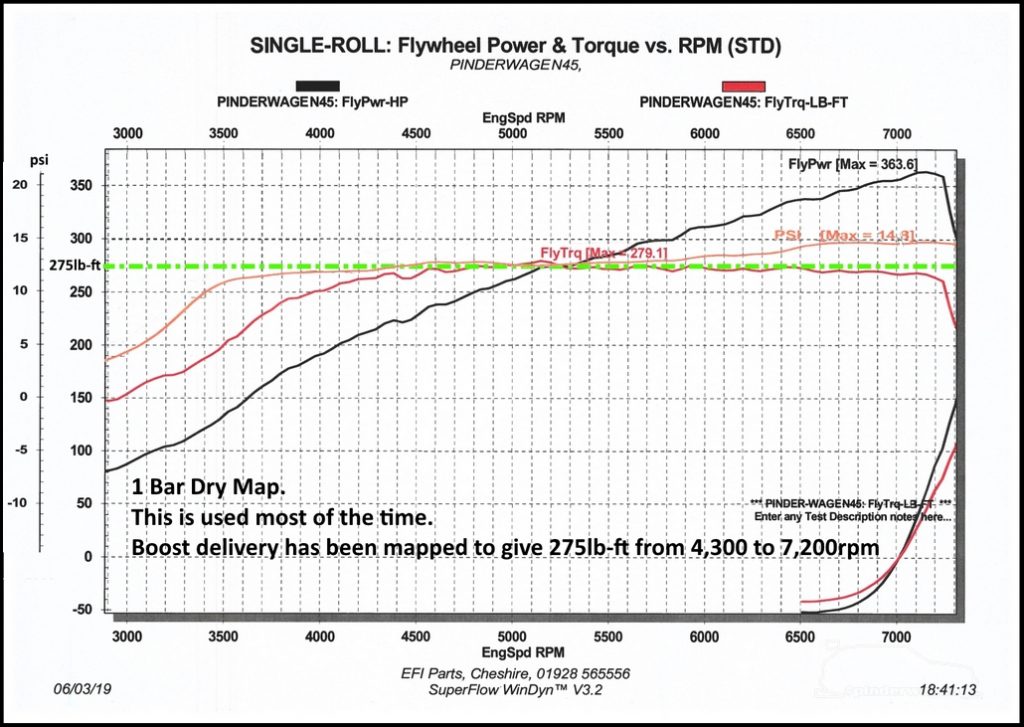 Now it was time to open up the Turbo, but again we looked at the dyno from last time. Peak torque was 359 lb-ft, but this dropped away quickly as the TD04 couldn’t maintain that level.  This gave a big `push` when pressed but started feeling breathless at the top and as torque dropped to the standard dry map level. What it did show was then when I deployed this torque in 4th, 5th or 6th when in a straight line and wanting to catch / pass something quick, the drivetrain could cope.

It’s the CV’s and then the gearbox that will fail on mine. The next upgrade is changing to the heavier and stronger 02M. I could fit that, but it doesn’t address the CV’s which are the weakest point already. Without new hubs, bigger bearings and some custom CV joints I can’t do anything about that. Hence the car being mapped in the most sympathetic way possible.

For a road car, you’d want more midrange but we mapped out that thump in the back when you put your foot down. I’d guess it would be going on for 400lb-ft if we wound up the boost between 4,500 to 6,000. Obviously that’s only going to end up with broken bits if I try that on track with slicks. 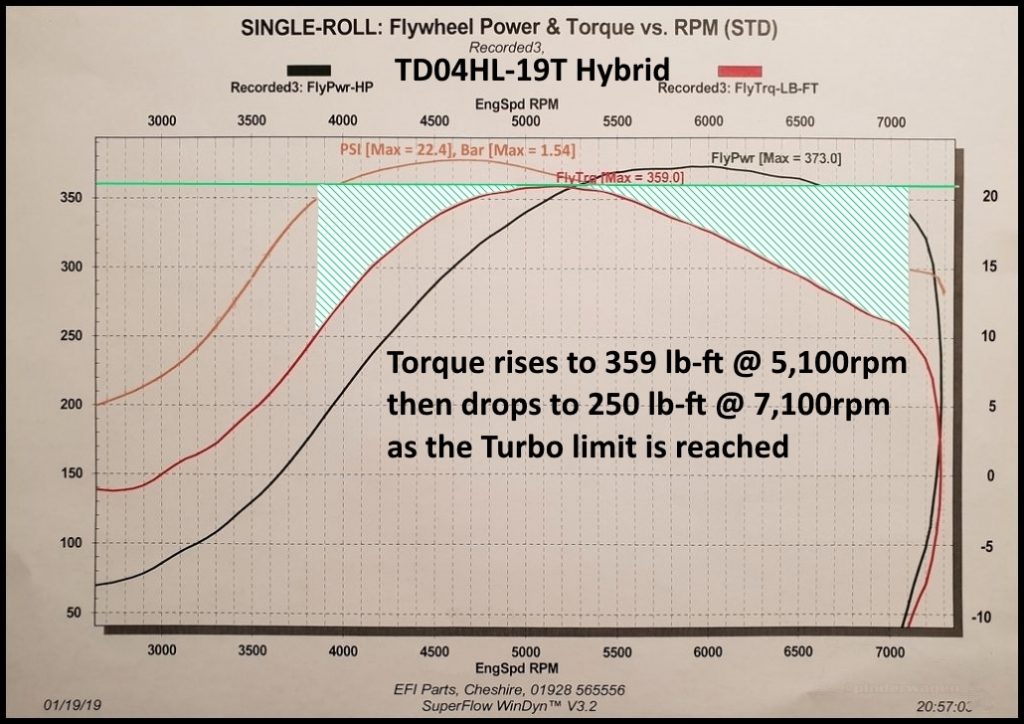 Discussed with Chris that 360lb-ft should be the maximum we aimed for. 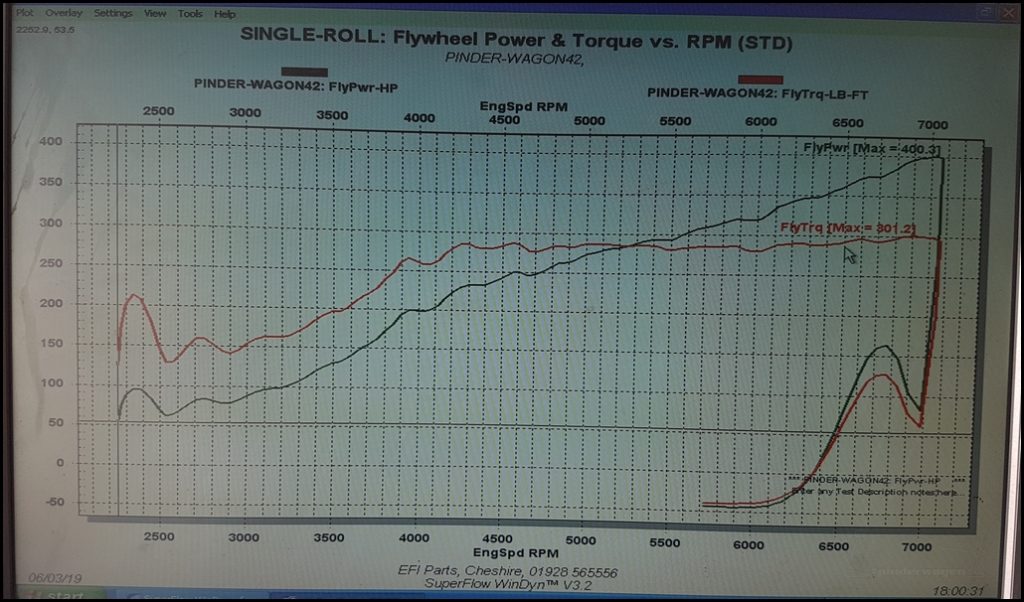 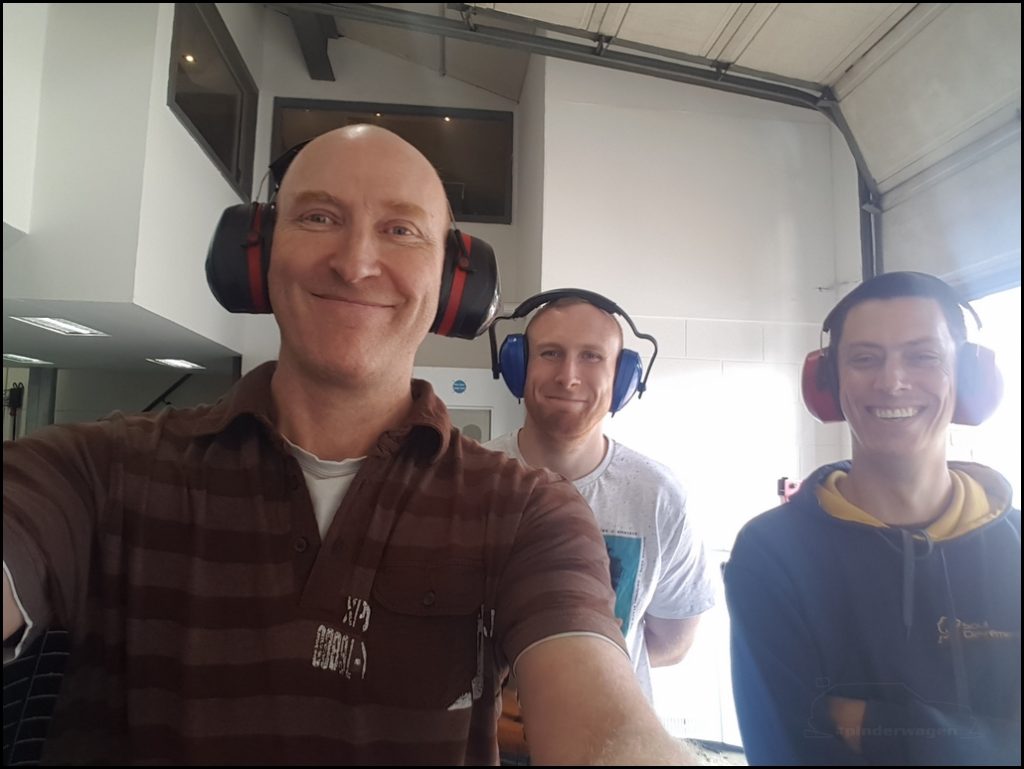 Increasing the duty cycle on the boost solenoid and we soon started seeing more power, but the torque fell away as the revs rose.

This plot shows a couple of pulls, torque too high at 378 lb-ft but dropped to 300 at redline. 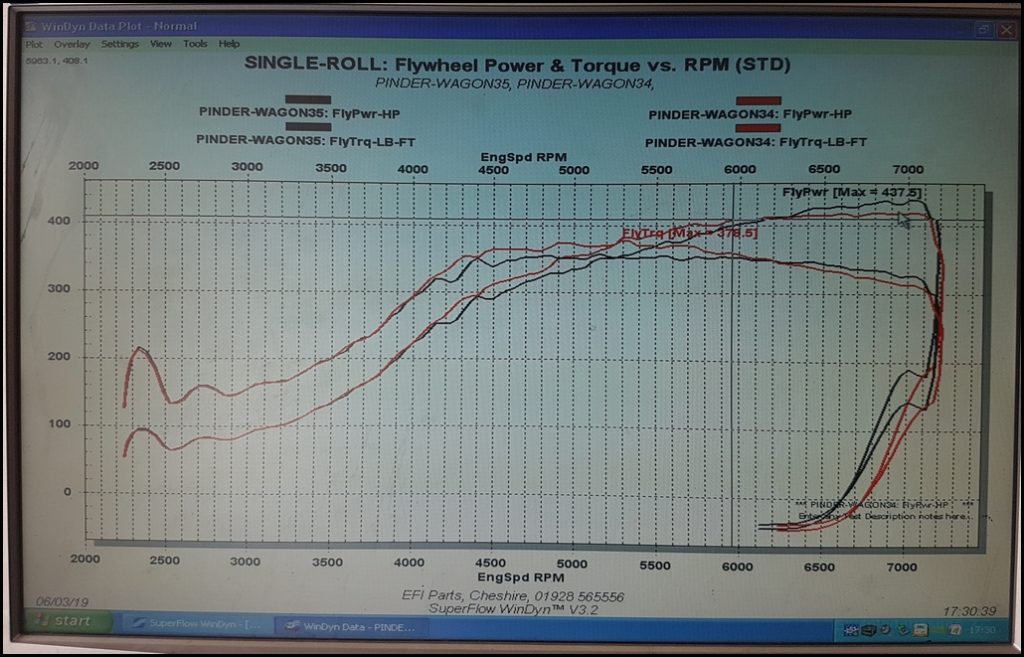 A bit of tweaking and we saw a much better torque delivery and we hit 440HP at the same time !

Torque drops off right at the top end but we felt this was acceptable. The fuel pump was starting to struggle to supply enough fuel and rather than push it we settled on this final map. 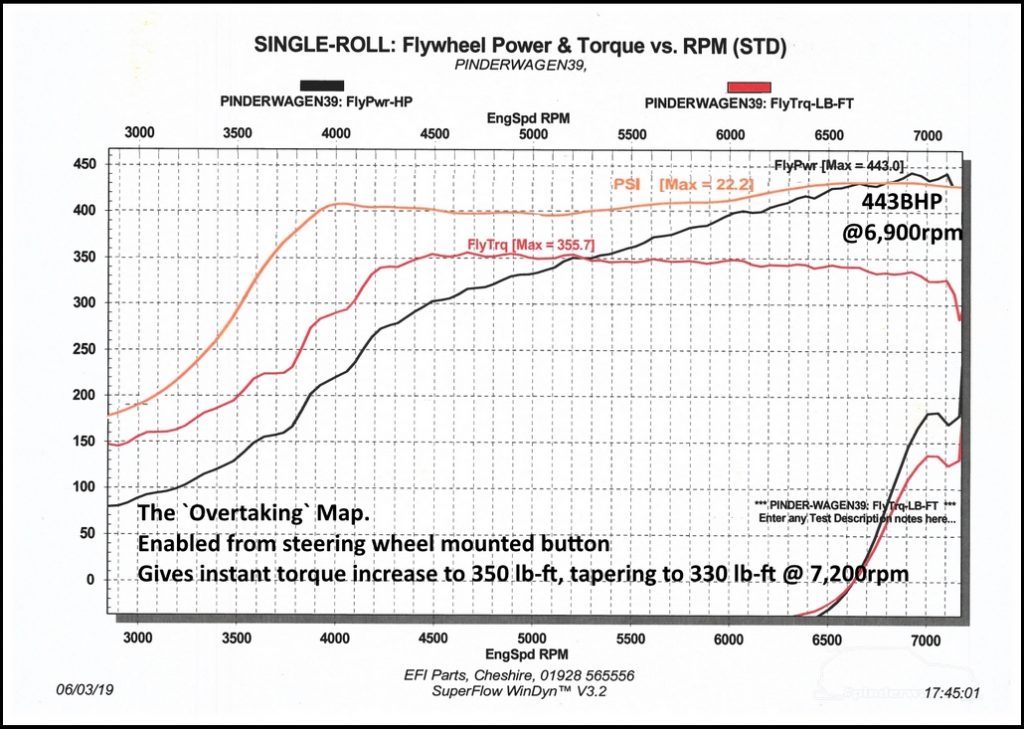 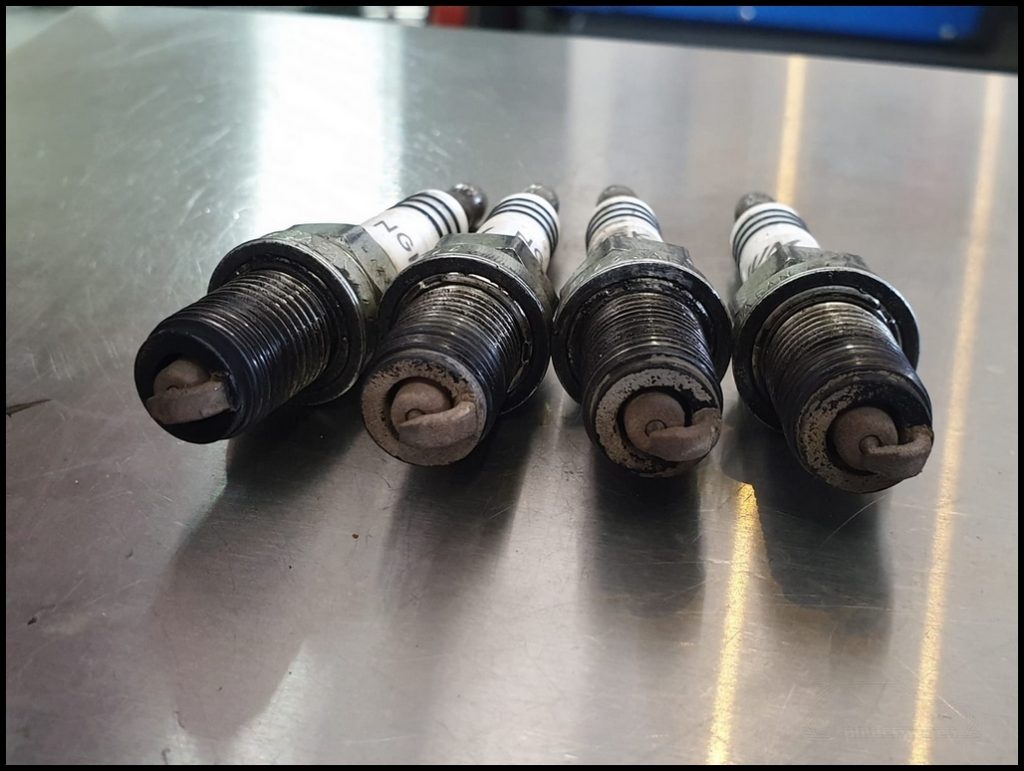 If we had just tuned for maximum power we would have passed 450HP easily, but that’s missing the point. I’m struggling with drivetrain reliability as it is. Not in a straight line, but when on high power and going over kerbs or big bumps on track. The wheel spinning up when in the air then landing causes a shock load through the CV’s and driveshafts breaking the CV’s instantly.

By not going over the ‘safe’ 280 lb-ft limit for normal dry running and keeping that level, I’m hopefully this will aid longevity. I don’t use the overtaking button often and when I do it is usually in 5th or 6th. Having run 355 lb-ft last with no ill effects this year, that was chosen as our limit for this map.

Time will tell if it’s too much or not.

Since this session I did a trackday in the wet at Bedford. The power delivery is amazing, it really feels like a big capacity n/a car with loads of power ! The 1.5Bar map is just ballistic and the car really picks up and accelerates hard when engaged.

This pull from 60mph to just short of 140mph shows how relentless it is but as the delivery is so linear it never breaks traction even in the pouring rain.