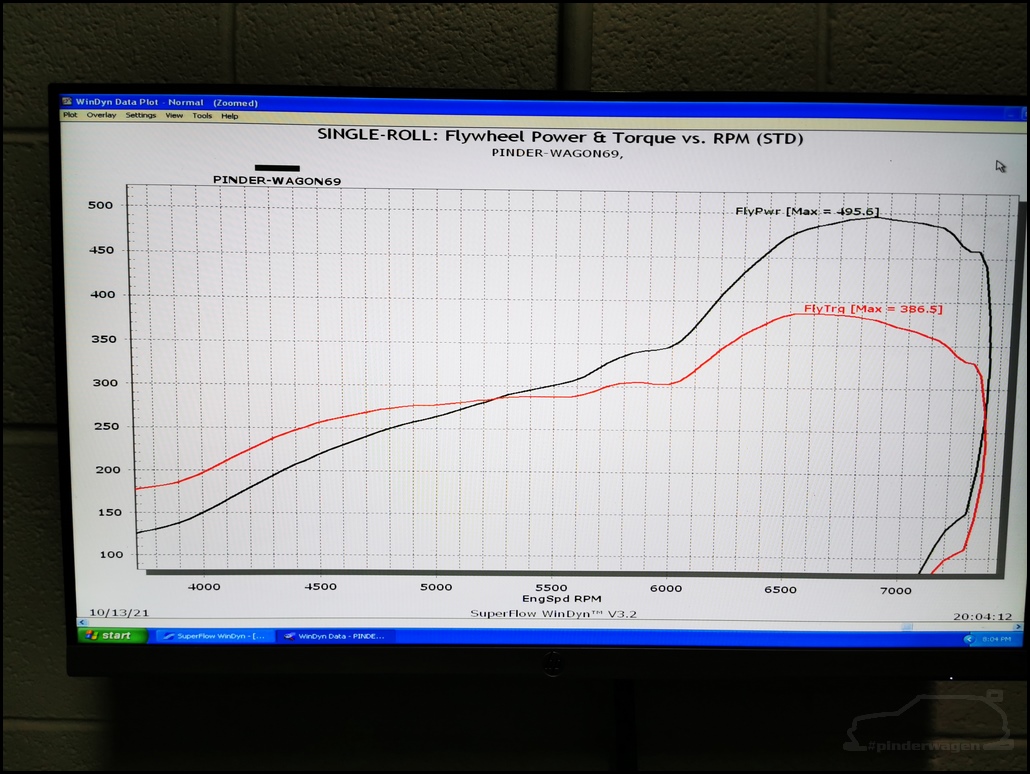 The previous ex BTCC Turbo was extremely responsive and I was really happy with it as a choice for the Golf. Then a friend let me know about a known, very low miles used G25-660 that was available. It’s one of the new generation Garrett turbos with slightly slower spool but a way better top end. 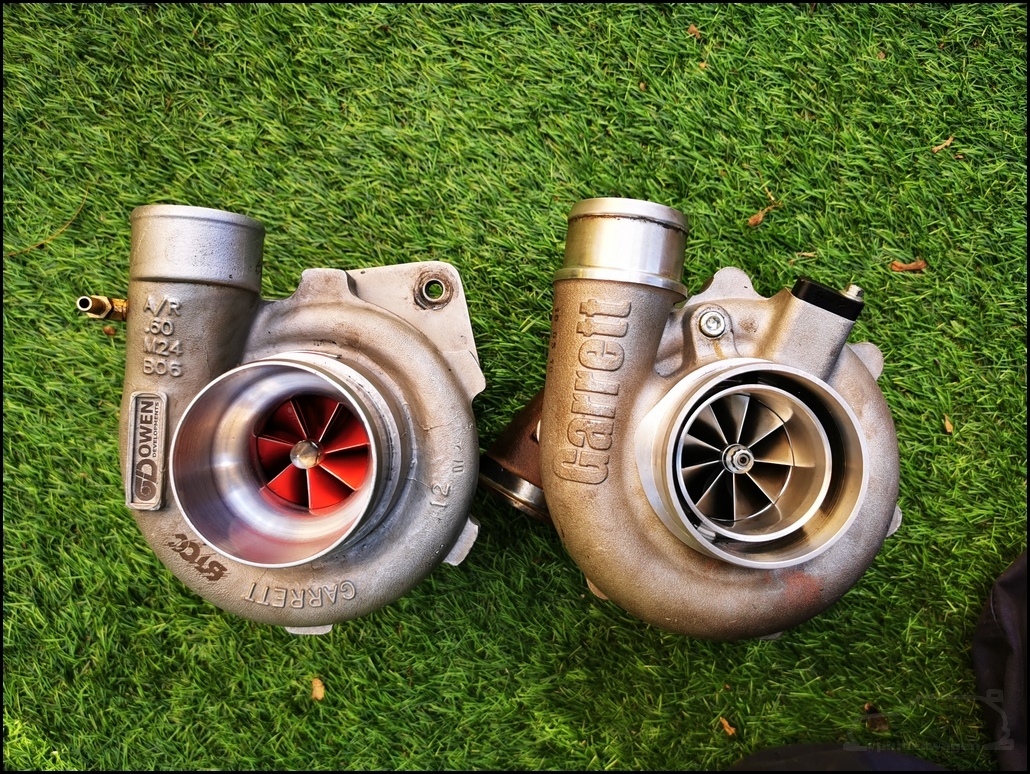 It`s a very similar housing size, 0.72A/R but the turbine & compressor is much ‘deeper’ as can be clearly seen with them side by side. 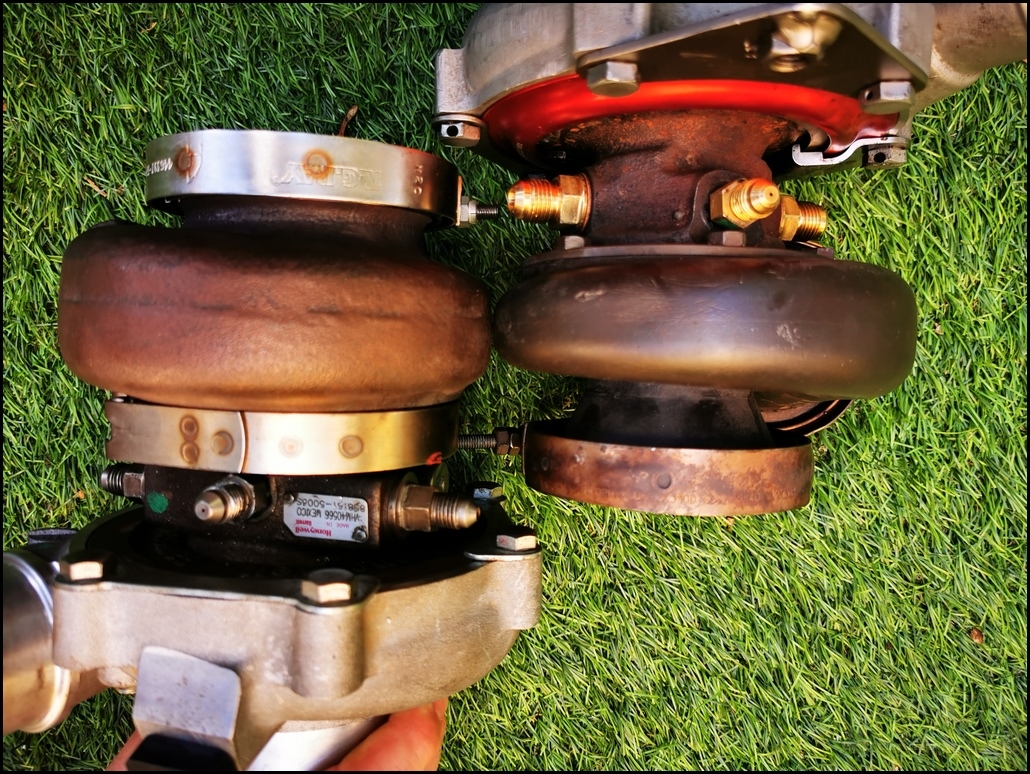 First off Chris tweaked the fuelling to suit the characteristics of the G25, it didn`t take long and we were very quickly ready for the power runs. Initially it was an actuator pressure run @ 0.8Bar A very healthy 303BHP@7150 rpm, torque is fairly flat and this is the map I use a lot in the wet where traction is limited. 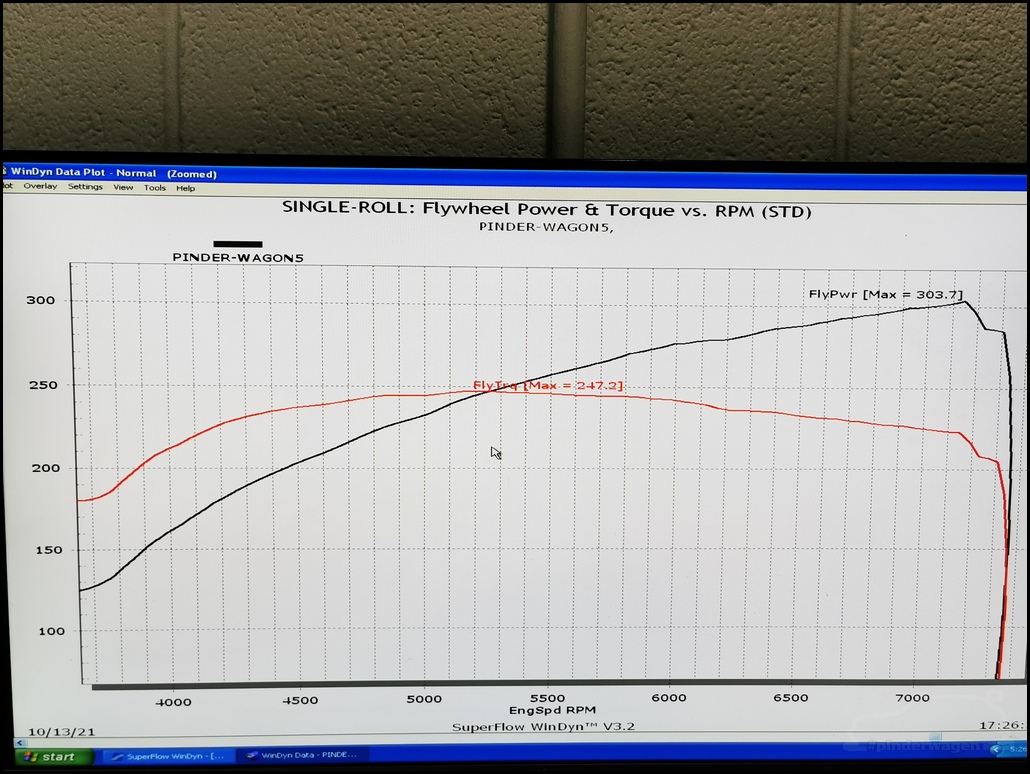 We then had a long chat about the sort of torque delivery I wanted. This turbo is capable of supplying a LOT of midrange, but experience has taught me that`s not always something I can actually use and it just spins the wheels exiting corners, even with the plate diff.

The fundamental torque curve is shared across all the gears when using boost-by-gear, but the efficiency of the turbo at higher boost meant that the curve would naturally lift at the top end as we turned it up.
Bearing this in mind, Chris aimed to get a near horizontal torque curve in 3rd and then as we mapped 4th, 5th and 6th, it would lift at the higher rev range.

This first run shows peak around 5,500rpm then dropping slightly all the way to redline. 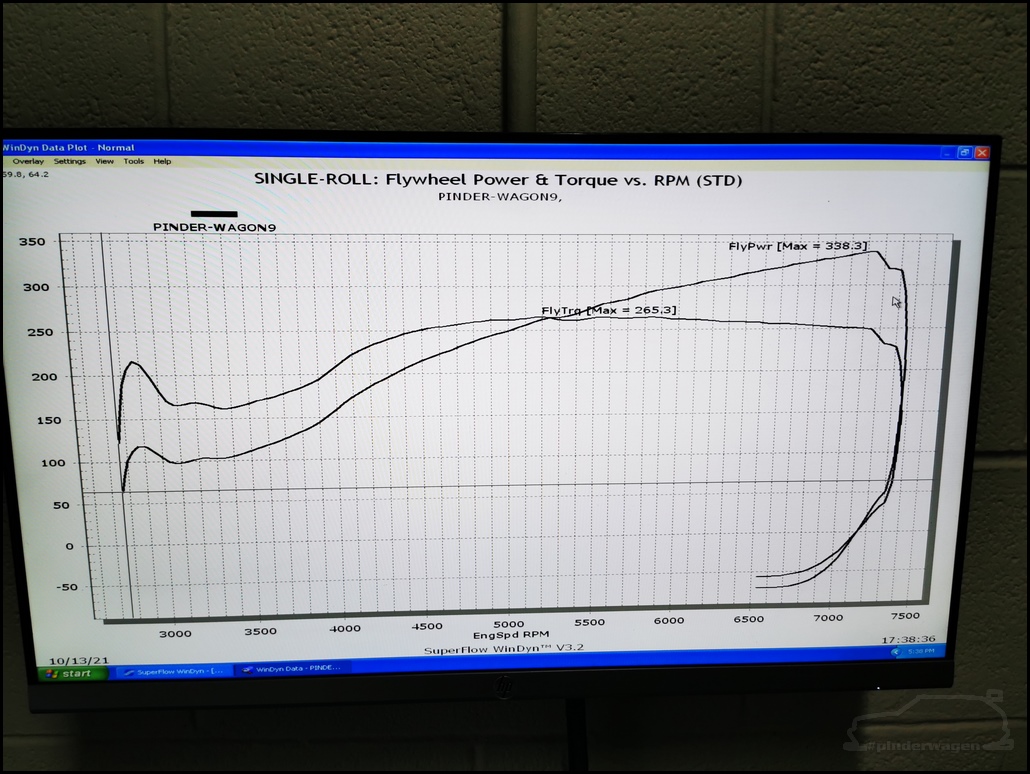 Next is similar but still dropping off 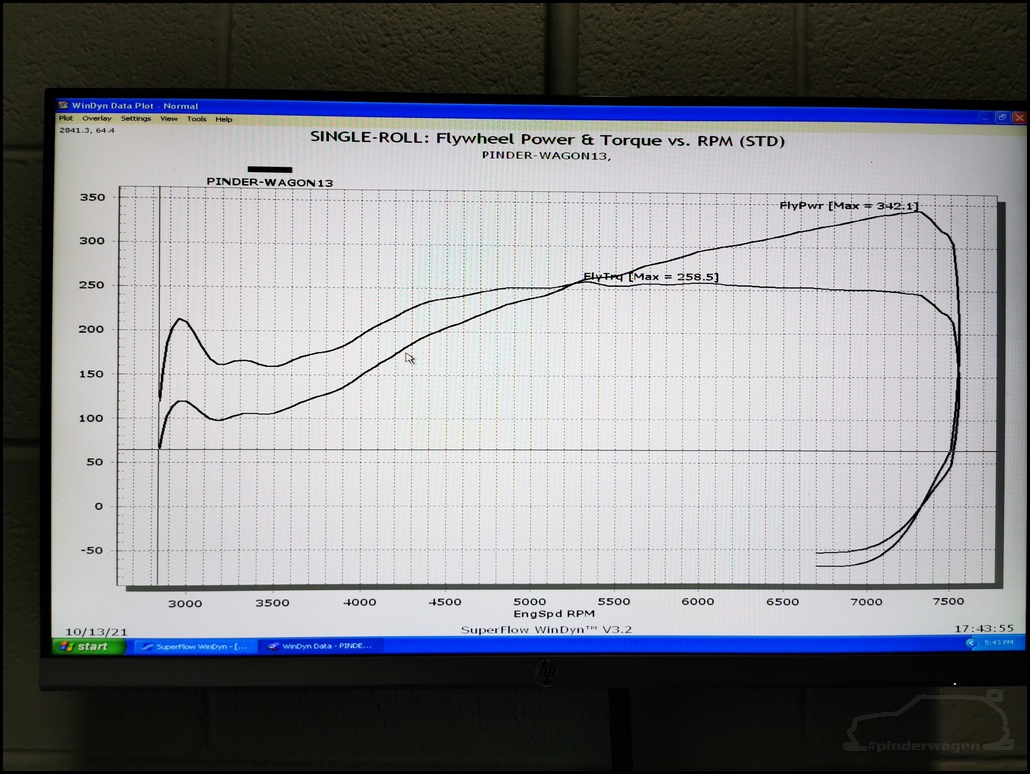 Almost there, just a small dip at the very top. 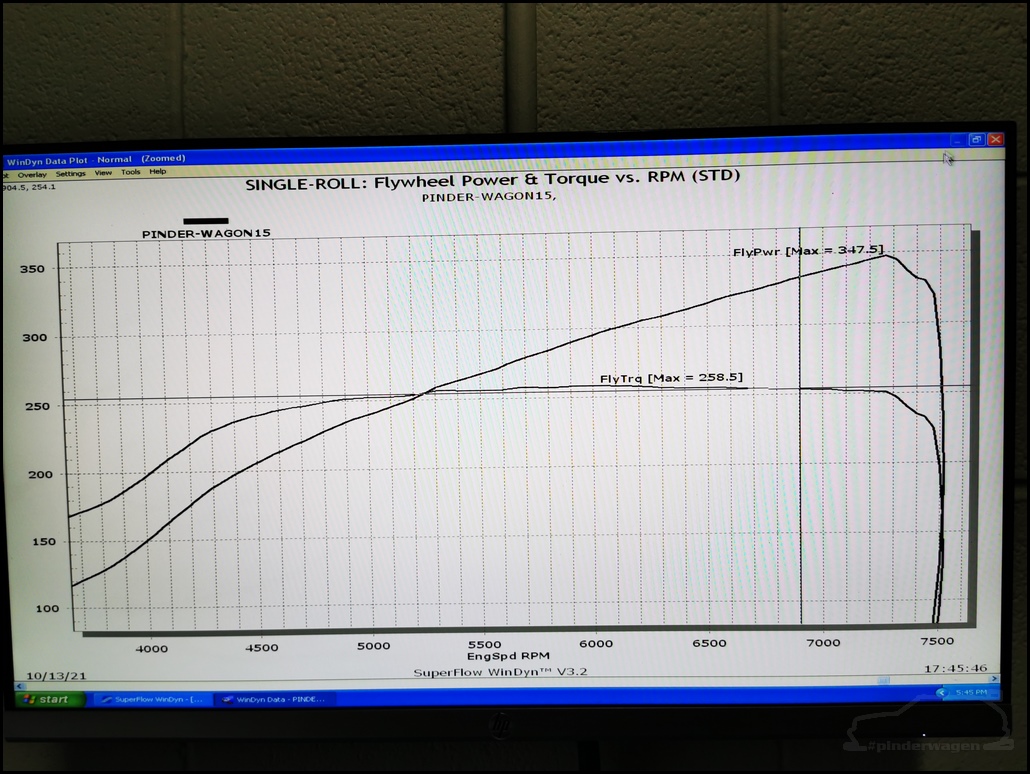 Not only does this make the car fantastic to drive, but it`s easier on the gearbox and drivetrain as there is no huge slug of low-down torque we could get it we let the turbo give all it could. 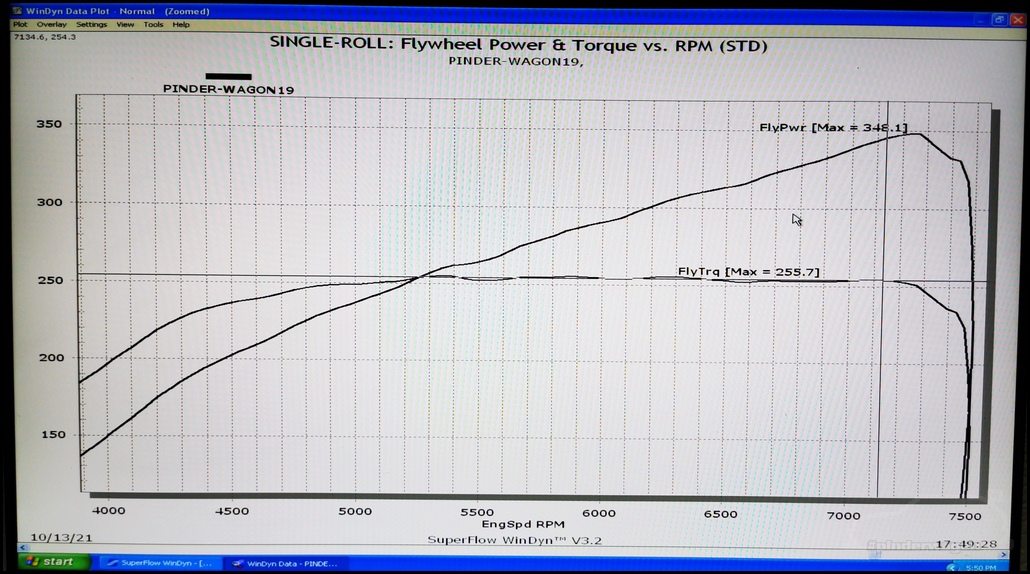 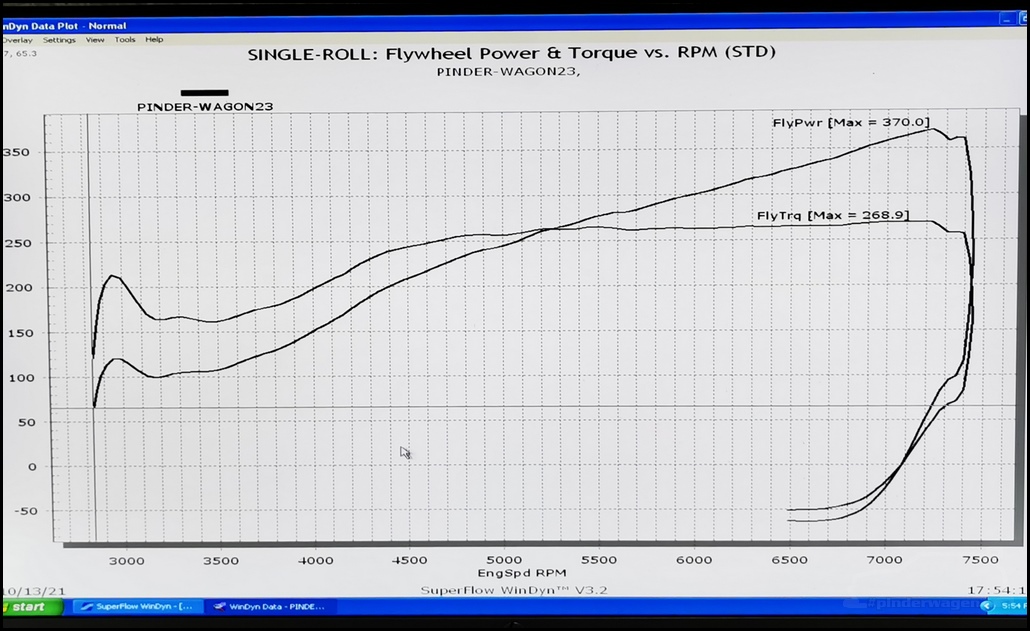 A 1% increase to the multiplier is almost 10bhp. 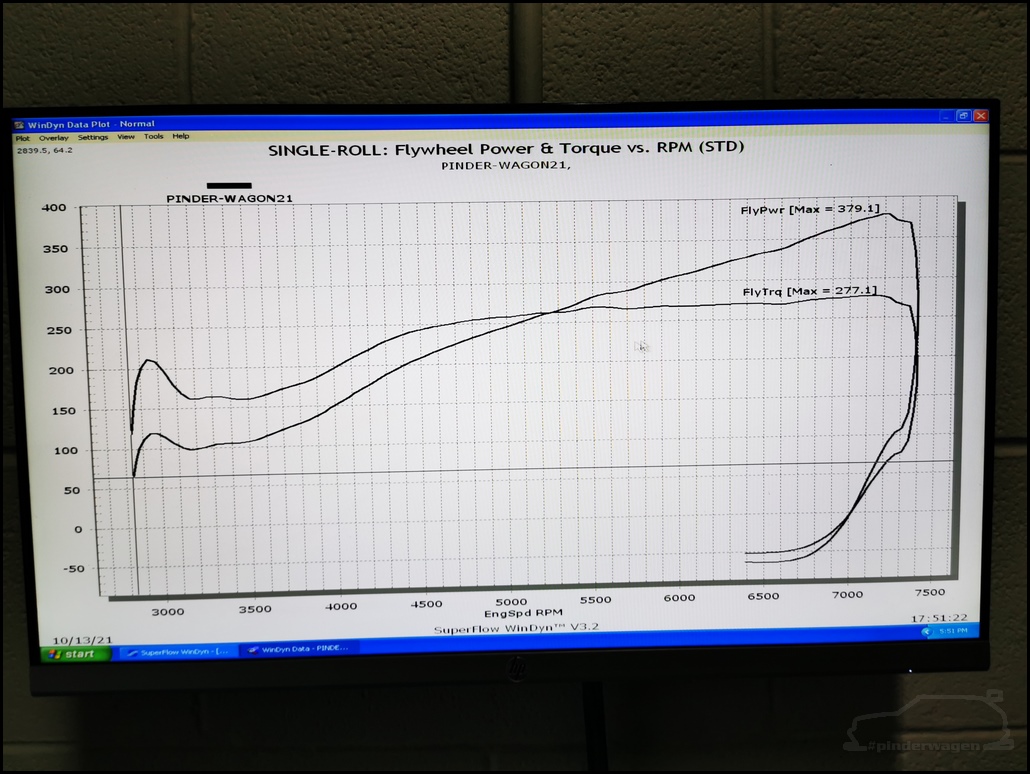 This is 3rd and 4th BBG plots overlaid. 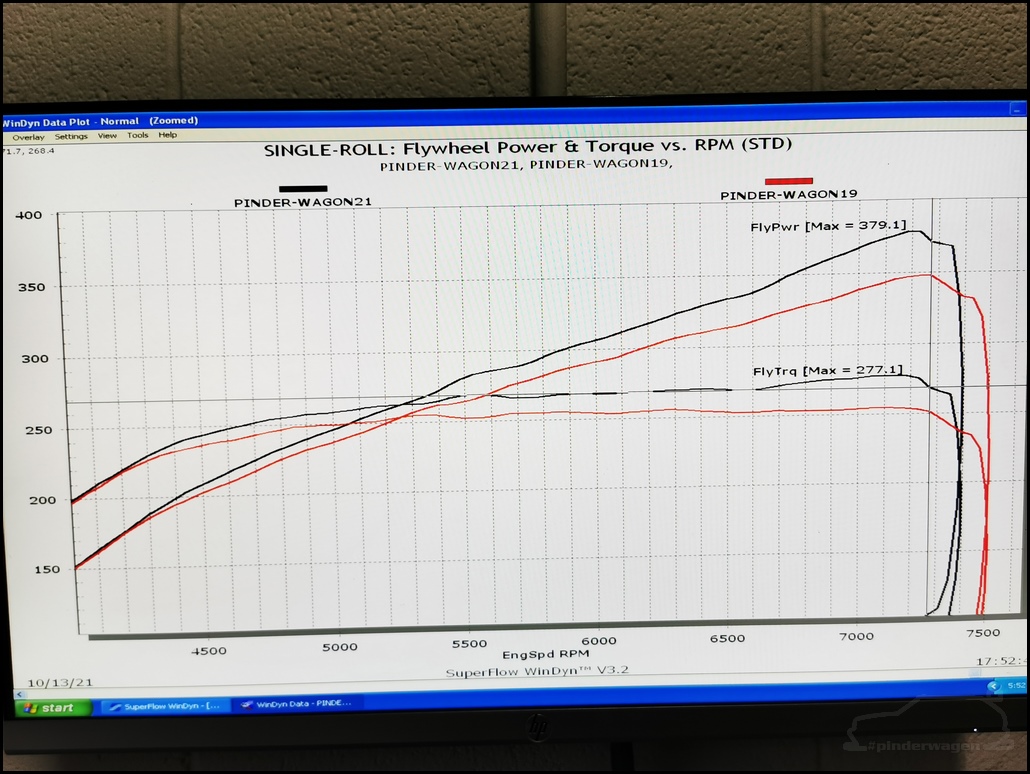 5th allowed us to open it up some more and we were straight into the mid 400`s. The torque plot is now continually rising which just feels more and more eager as the revs rise. 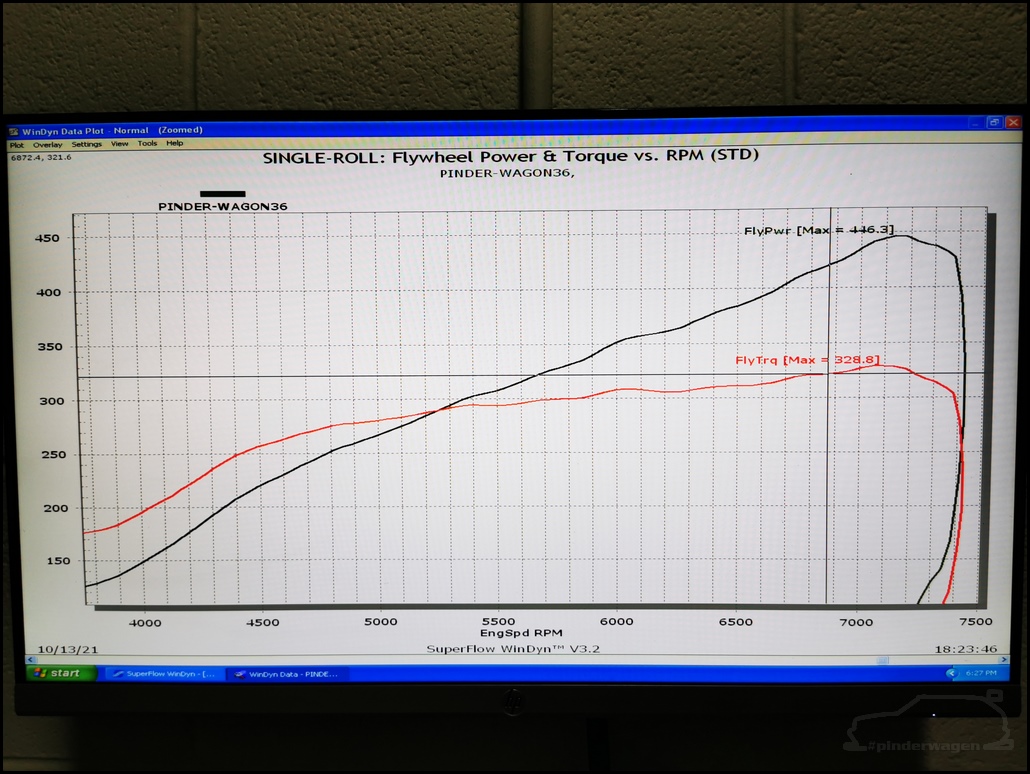 6th still maintains the same shape, just with even bigger numbers at 462HP and 385 lb ft. 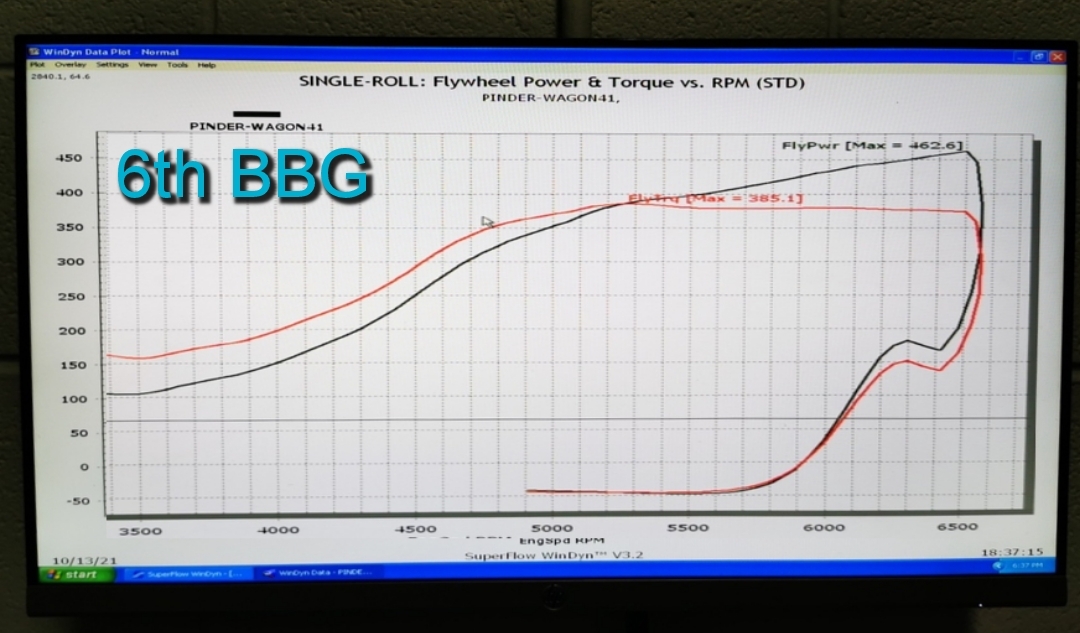 With the boost by gear mapping complete, it was time to turn our attention to the ‘overtake’ button. The steering wheel mounted switch instantly swaps to MAP2 and a completely different boost delivery table.

I use this when I’ve exited a corner and have full traction. The latching button is next to my left thumb and operating it is automatic, it requires almost no conscious thought. 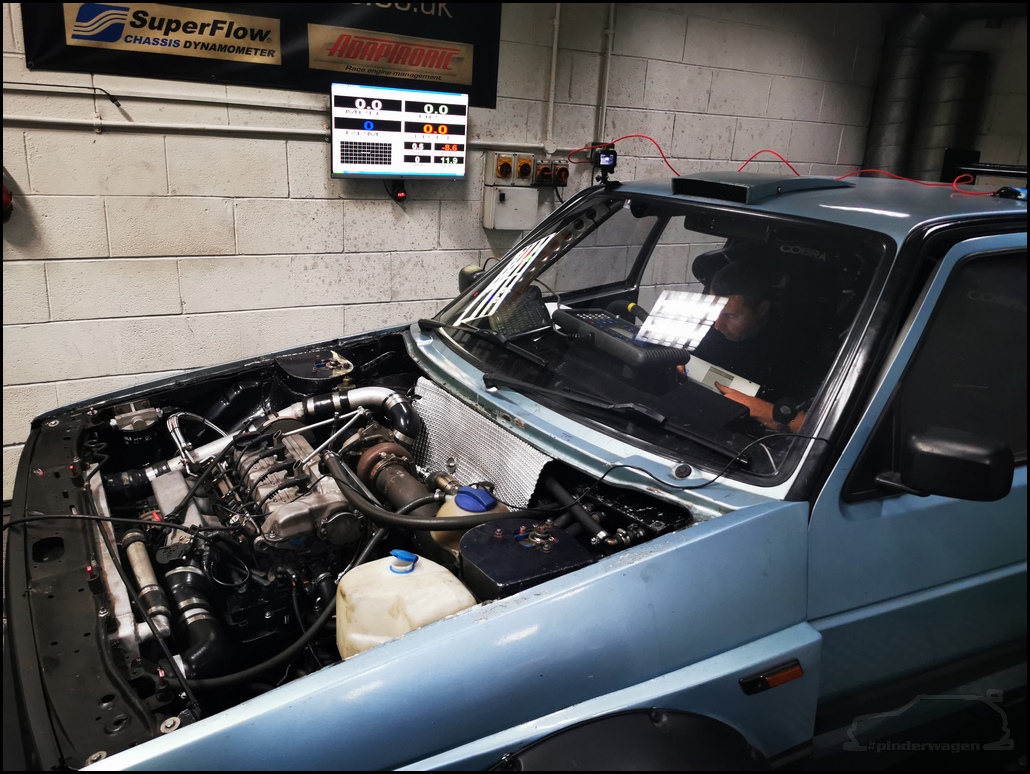 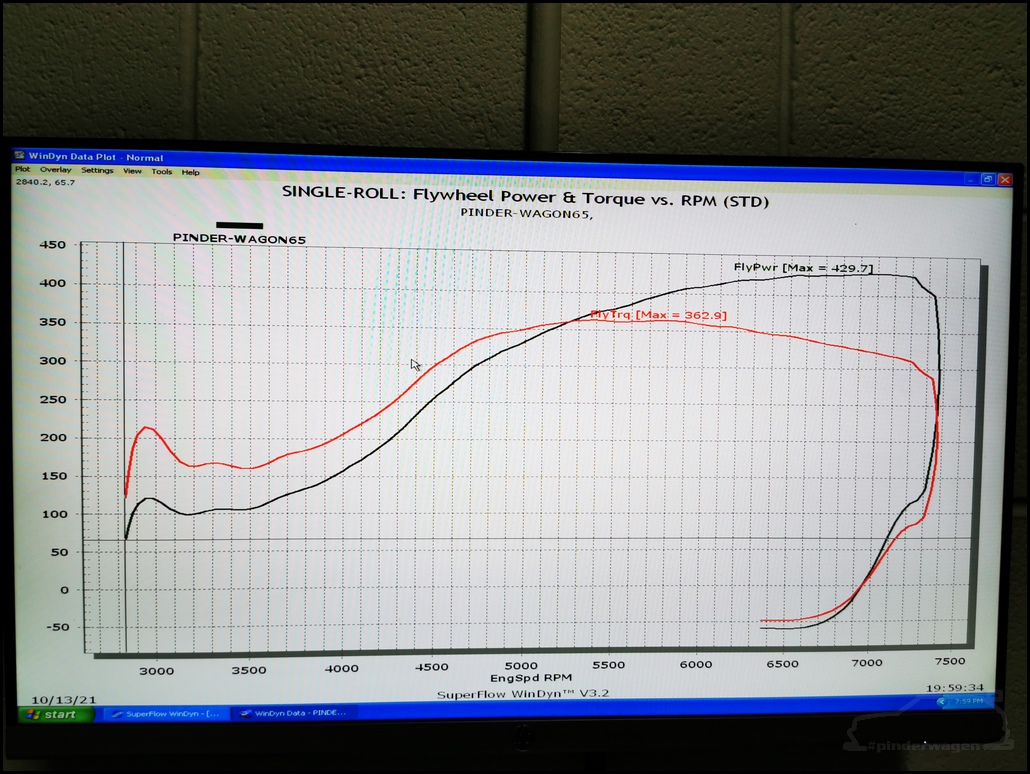 4th is the same shape, just another 20HP and 19ftlb 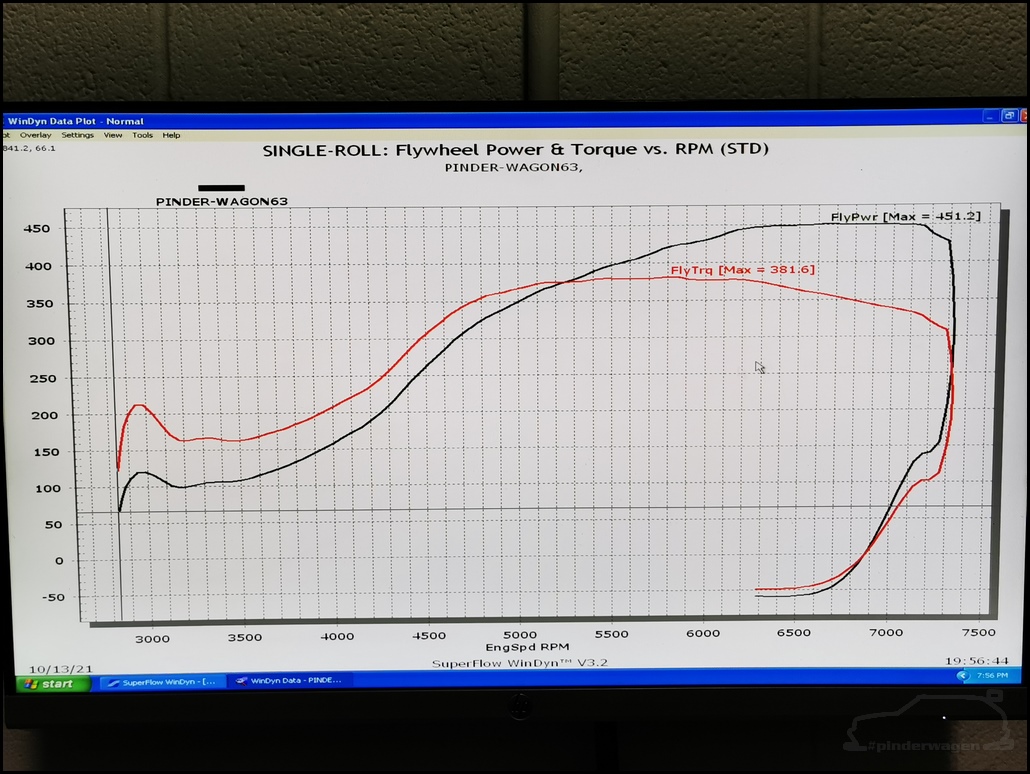 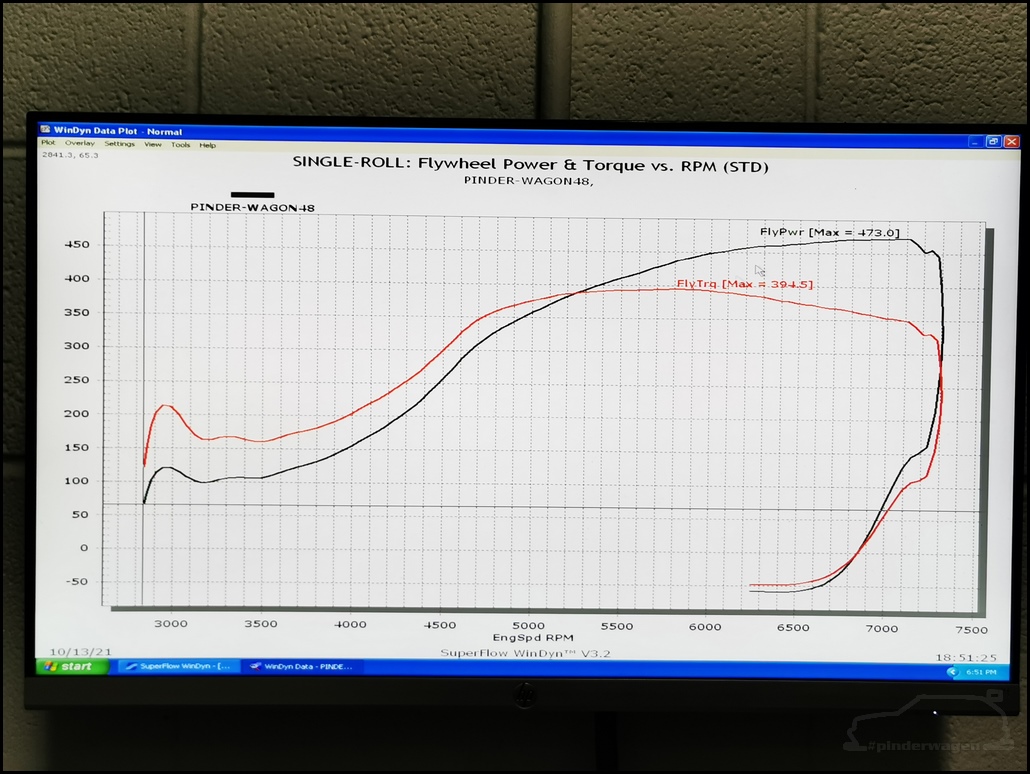 Then onto 6th. This is the GT2868HTA giving everything it could at the top end and making 432HP 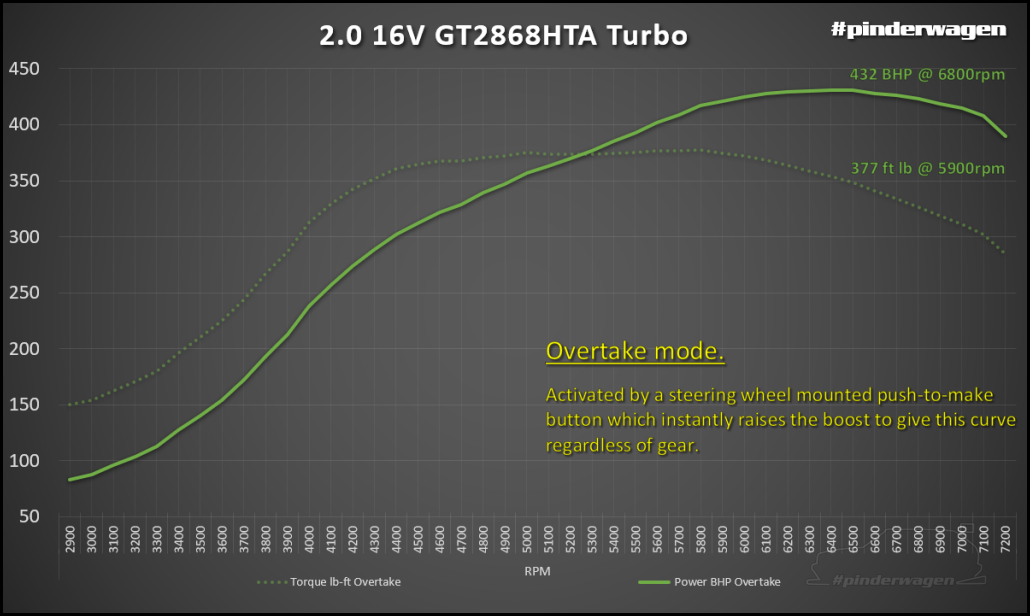 The G25-660 produced over 500HP although the spool difference between the 2 is 500rpm, it isn`t something I find a big issue on track. It`s certainly a fraction less responsive mid corner when applying more throttle, but not so much that it’s a problem. There was more midrange available but I still wanted to keep a driveable torque plot that wouldn’t overly stress the gearbox. 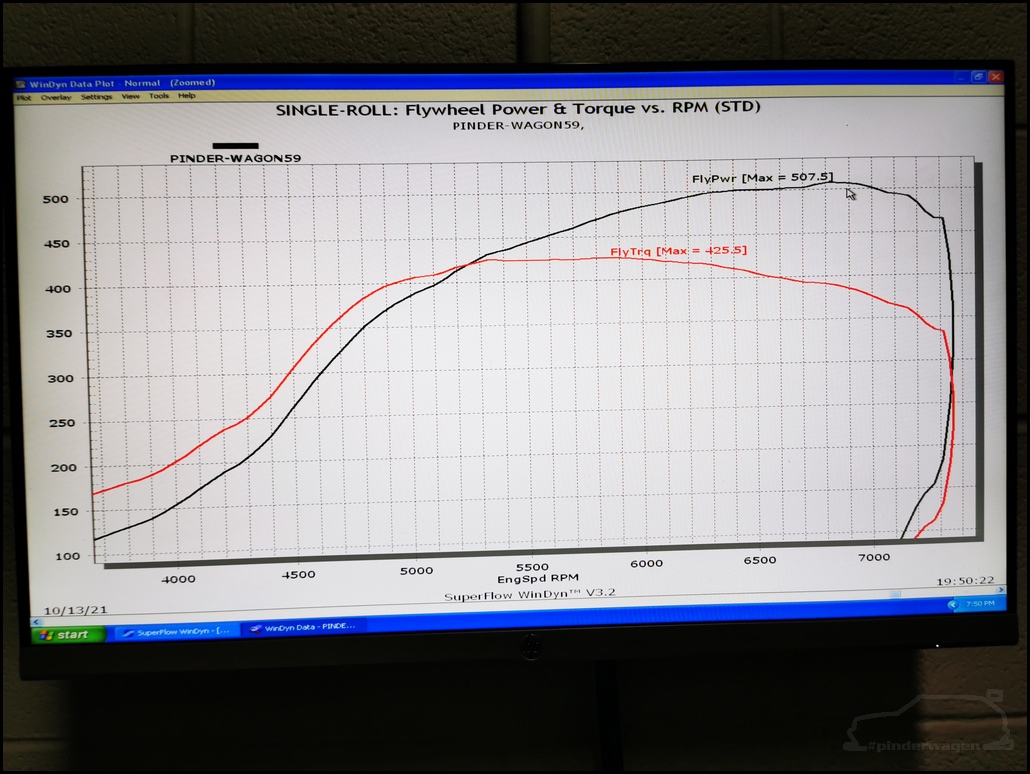 Finally, my favourite graph. Midway through a pull, Chris pressed the button in 6th and the power jumped immediately. The dyno tries to smooth the curve and the onset is actually steeper than this.

The torque plot pretty much follows the boost plot but on this one it lags behind once the button is pressed due to the dyno smoothing. You can see here the boost rises very from 1.0 to 1.95 Bar in under a second.

Having over 100HP at the touch of a button is addictive. These passenger reactions when I press it help convey just how good it is.

I have driven several back to back laps of the Nurburgring using high boost most of the time, the temperatures were all within spec and the mapping means I can use it as much as I want. I’m not limited to a few bursts per lap, I can leave it latched and drive all day in MAP2 if I want, but it isn’t as much fun to drive, I’m always chasing traction and it burns up the front tyres.