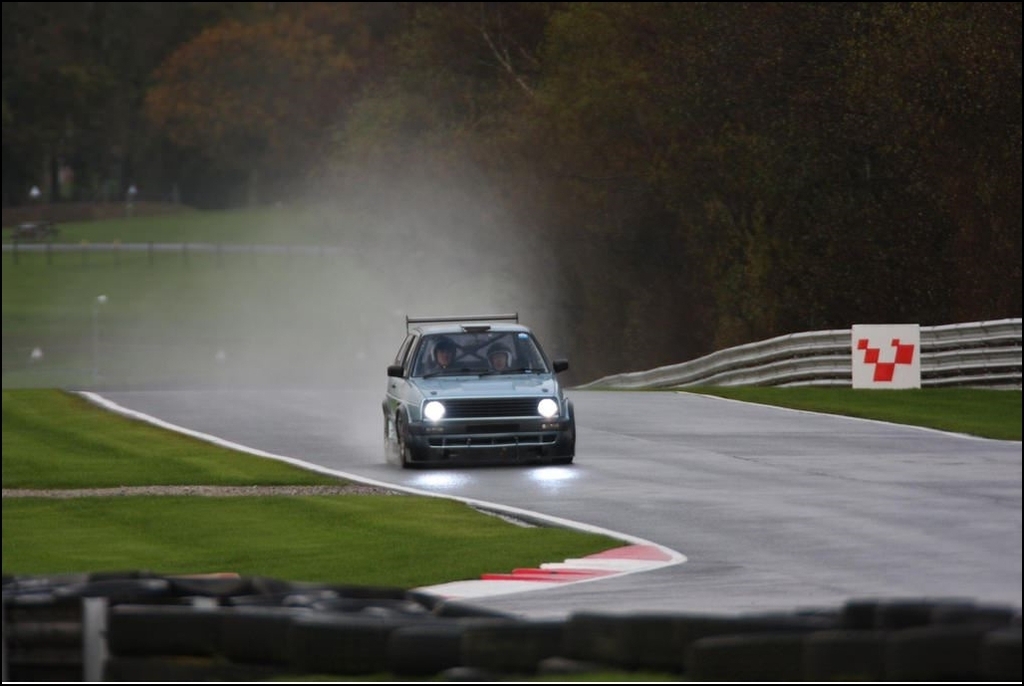 Crap drive over on the M62, traffic was particularly bad, added another 30 minutes to a 90 minute drive, but arrived, signed on and unloaded the Golf.

Steve didn`t have to shout to make himself heard, it was the quietest day I can recall being on. A shame for Circuit Days but lots of tracktime for us. Weird how there are those occasional days that don`t fill up for no particular reason

On the way back from the Briefing Matt saw this….

The paddock was quiet !

Noise test at 89db, then sighting laps. It was raining but not too heavily.

First session with Matt, pretty greasy and being on well worn Pilot Sport Cups didn`t help. If you`ve driven on them in the wet when they are worn, you`ll understand how bad they are. If you haven`t, trust me, they are rubbish..

Took Stan out for the 2nd session, Wilko `exceeded track limits` a little…

The rain was still falling, so I thought it prudent to fit the Silverstone Wets. I`d bought them last year, but never used them.

Next lap out and the car was instantly better. Less sharp on turn in, but so much more grip and less aquaplaning !!

Unfortunately, I`d run out of Anti-Fog, so the top and sides of the windscreen was fogging up, which meant after the first couple of laps, all you could see on the footage was mist.

I was struggling for traction in 3rd, so switched to the `wet` map. This is just a lower, more progressive boost target and made the car much more driveable.

Caught this Ginetta, followed him for a lap and then he moved right towards the pitwall approaching the start / finish. I took this an a definate invitation to pass.

Seems I was mistaken…

For info, here is the lap before where he stayed left. Hopefully shows why I thought he`d moved over for me to pass…
http://www.youtube.com/watch?v=e57V1xU07mg

Took Tabs out before lunch, wanted to show him how the different maps affected traction. Went through them all, from actuator pressure only to full `Max boost`. Funnily enough, it wheelspan as soon as the boost built.

Had a cracking session with this Evo. I couldn`t live with him out of the corners, he just disappeared whilst I wheelspan, but I was better under the brakes. Made for a great session and he appeared to enjoy it as much as me.

Several months ago at Anglesey, I`d planned to do some more `testing` of the Aero and airflow. Unfortunately, the cracked exhaust manifold meant that never happened.

Stuck on a load of wool tufts I`d already prepared and stuck to a sheet of greaseproof paper, went out and Matt took some close-ups.

The airflow is still UP the rear screen. I hoped the roof spoiler would reduce this and it has to an extent. Lat time I did this, the air was flowing up from the middle of the rear panel, under the tailgate

Now, that area is flowing down and the upwards part is midway up the tailights. What does it mean you ask? Good question !! I`m not sure…

I`ve added some lines to show the flow path around the front wheel arch and splitter. As expected, the air is being sucked under the splitter nicely, it`s flowing over the wheelarch then being drawn back down towards the sills.

As it approaches the rear wheel, it is being sucked under the skirts and into the wheel area. I`d hoped the skirts would help reduce this, but it`s still and issue.

Gurds and I have discussed it and we suspect it needs a clearer `break`, something with a more definite profile.

The splitter end-fences certainly had an effect on the airflow. It stagnated the air right in the centre of the airdam and in the area ahead of the wheelarch.

It`s led me to believe I wouldn`t benefit from canards at the angle I thought. The air is already flowing that over the arch way so they wouldn`t actually do anything. The brake ducts are getting loads of air though, which is great news.

Next time, I need 4x the number of tufts and a drier day. Even if this doesn`t add any performance benefit, it does help me understand what`s happening and seeing how my theory is borne out in practice.

Just before lunch, we popped over the the scrutineering bay to weight the car.

With the larger radiator, an intercooler, larger exhaust, new manifold, a Turbo and all the cage mods I`ve done, I`ve still been able to save almost 20kg off the total weight !

After lunch Tabs disconnected the N75 valve to try running on actuator pressure only. He found it FAR more driveable. Right up until Wilko went offroading again..

In between session it was good to meet up with a few people, including Andy form PH who popped in to have a chat.

Followed Rich in his Porsche. He`d arrived at lunchtime and sorted some tracktime out with Chris. I`m not sure this was intended…

Steve had asked for a passenger lap so I took him out for a session. “No, really, Teffers is only this tall…”

Still pretty wet, but enjoyable all the same.

I always have a wry smile when the passenger tightens their harness midway through the session.

Back into the pits and a deserted pitlane.

Came in when I felt a vibration, thought something was loose. I did find a small amount of play in a trackrod end, but it was simpler than that. A puncture. On a tyre with under 160 miles on it. ARRGHH!!!

Finished the day having covered 200 miles without a single mechanical issue. A puncture, whilst irritating is a small issue and the gearbox / driveshafts were trouble free.

Final outing is Brands a week on Friday !