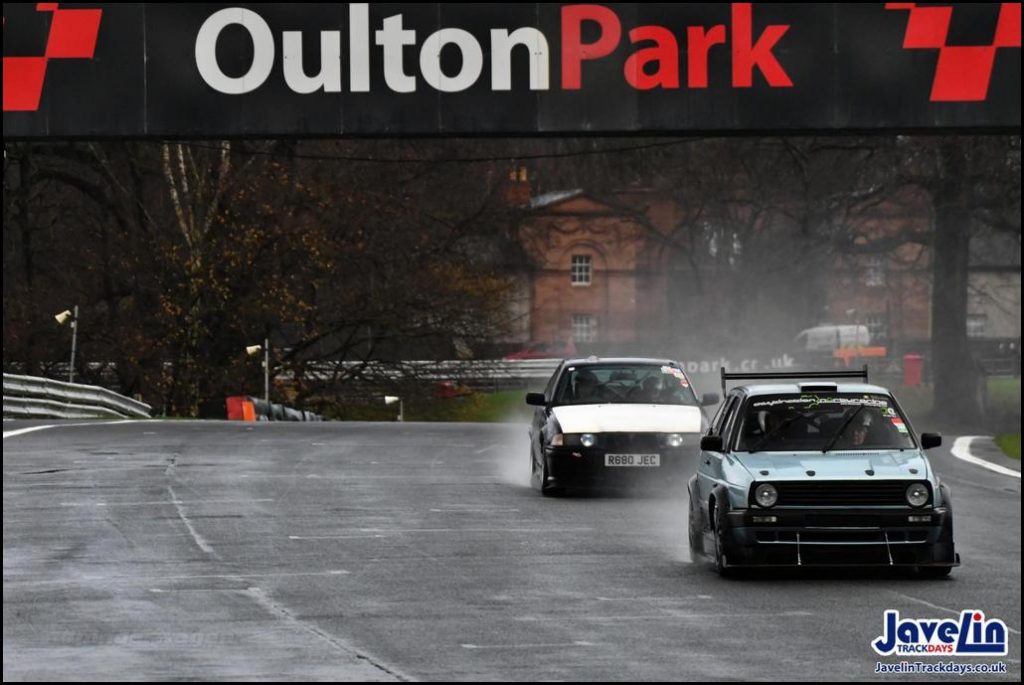 Oulton was the last trackday I`d booked in 2020 and with the lockdown ending the week before and the Tier system operating the day went ahead !

The new driveshafts had been fitten along with the stronger CV’s and my plan for the day was to drive as normal but later in the day start using the kerb agressively whilst on power. This setup should be able to cope and I needed to know if it would or not. There was no point spending the day driving round carefully, that wouldn’t tell me anything. 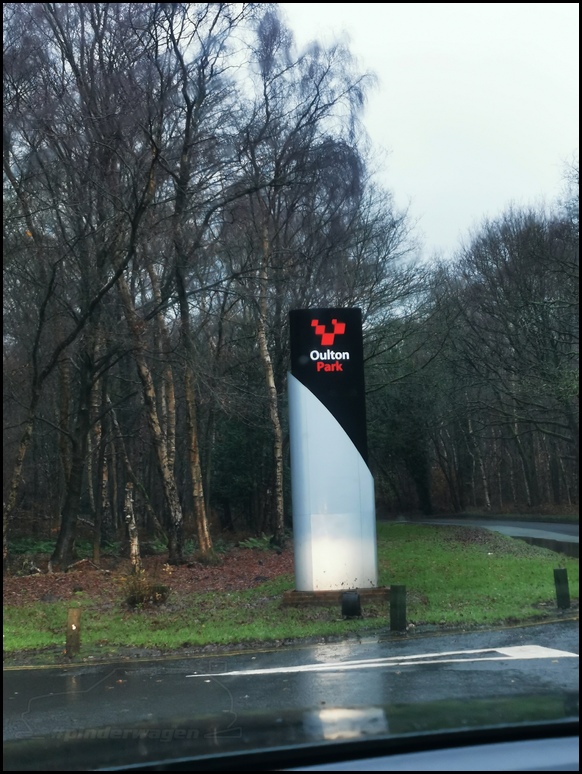 I don`t always book a garage on trackdays but I was pretty relieved I’d reserved one for today. The weather was downright miserable, cold and raining but having somewhere dry to refuel or just sit and have a cuppa was welcomed. 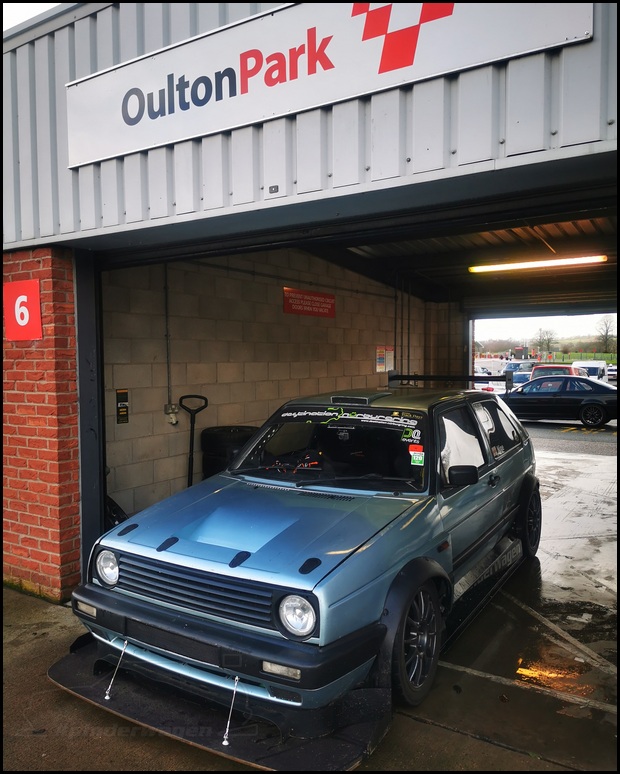 First session out and visibility was pretty poor. I was on the Cup2’s as I wanted to see what they were like in the rain. Honest answer ? average. They have turned out to be a dissapointing tyre for me, if all I had was one set of wheels they’d be OK but as I have several, I can fit better tyres for the wet and another set for the dry so this compromise isn’t necessary. I understand the Cup2R is like the old Cup1 which was excellent in the dry but I can’t get those in my size so I’ll stick to the Direzzas next year. 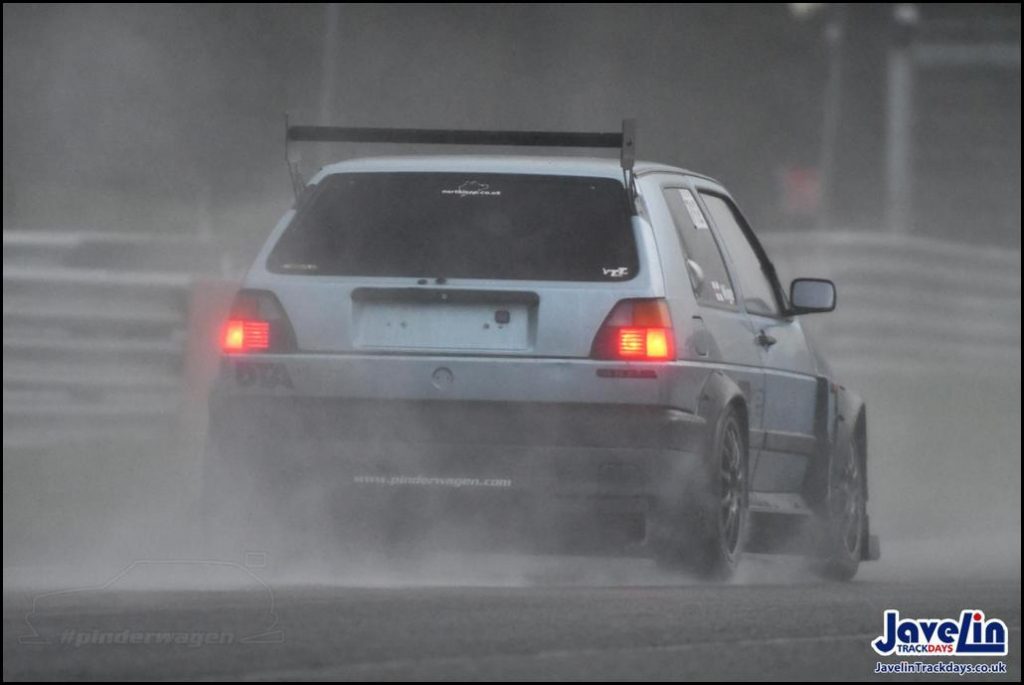 I’ve lost count of the number of days I’ve done with Matt or friends and yet never seemed to end up on track at the same time. Matt & I both agreed that’s we’d make a conscious effort to stay in sync during the day so we were out together.

In these conditions it was much easier being the lead car but the track conditions weren’t great. Many years ago that would have really put me off but now I’m happy whatever the weather. Sure I prefer the dry if I just want to go quick but the wet requires more concentration and feel of what the car is doing. I am far more comfortable that I used to be about the Golf moving around and we did several 15-20 minute sessions back to back.

Matt was on the Pilot Sport 4’s which are excellent in these conditions and it was obvious to both of us he had a tyre advantage. 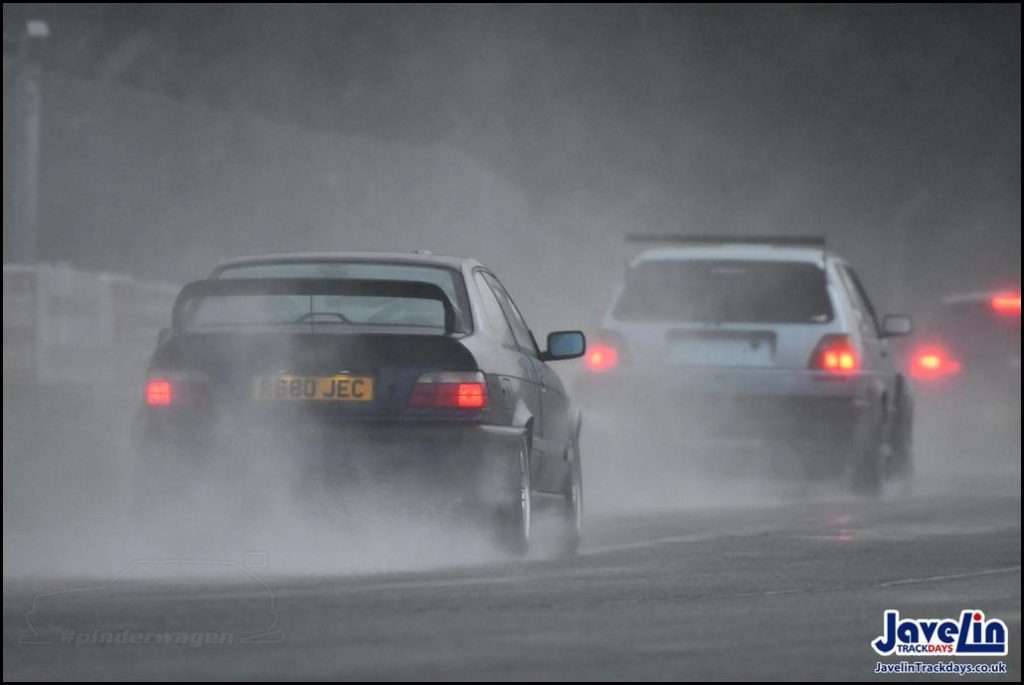 I swtiched to the RR1’s which took several laps to warm up. They are from 2015 and even though have a decent amount of tread and have been stored indoors, the rubber has definitely hardened and takes longer to get heat into. No matter though, once warm they were grippier than Matts Sport 4’s and now I had the tyre advantage 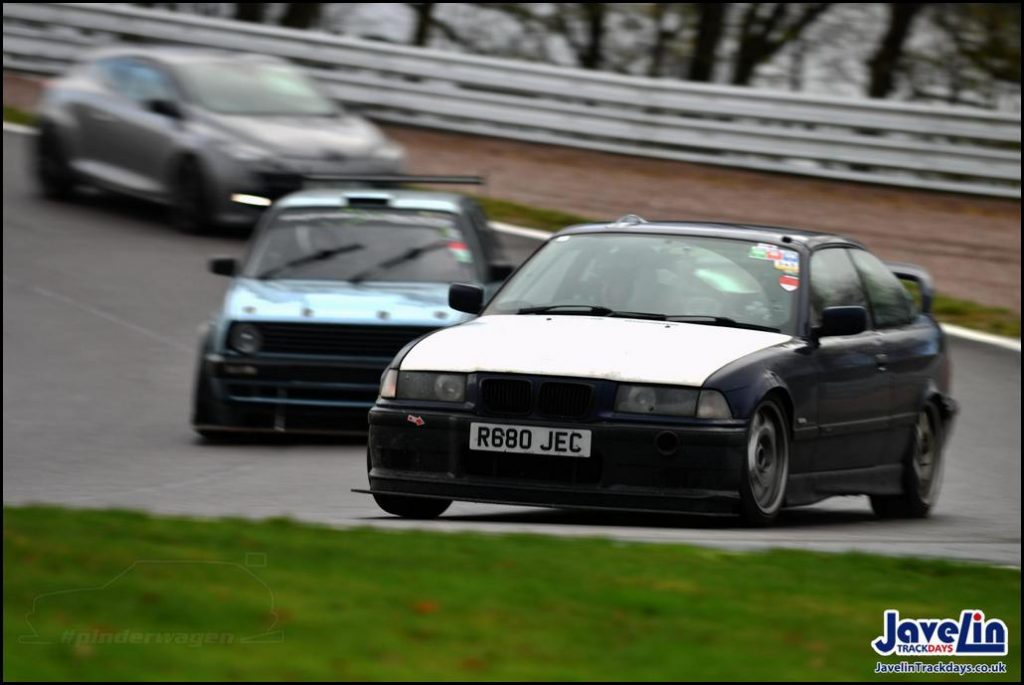 It stopped raining and the spray reduced but it took quite some time before any sort of dry line appeared. 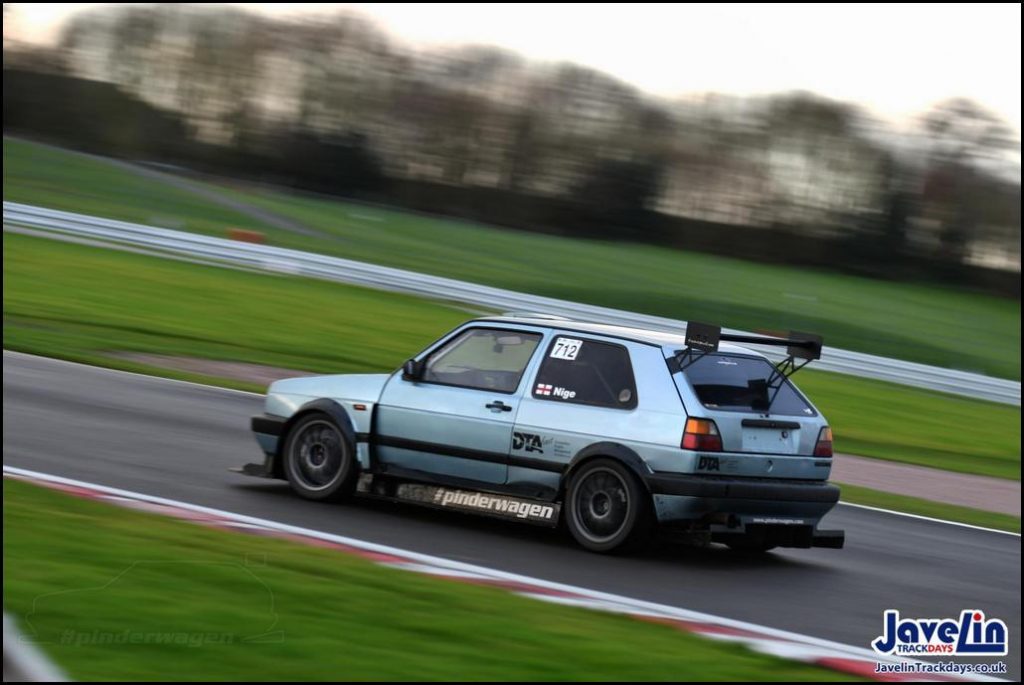 I was really comfortable with the gearbox, the gear ratios are absolutely spot on and I don`t think I ever found myself in the wrong gear or missed a gearshift the entire day. That, coupled with the rest of the drivetrain upgrades should finally be the end of the CV failures I’ve suffered. 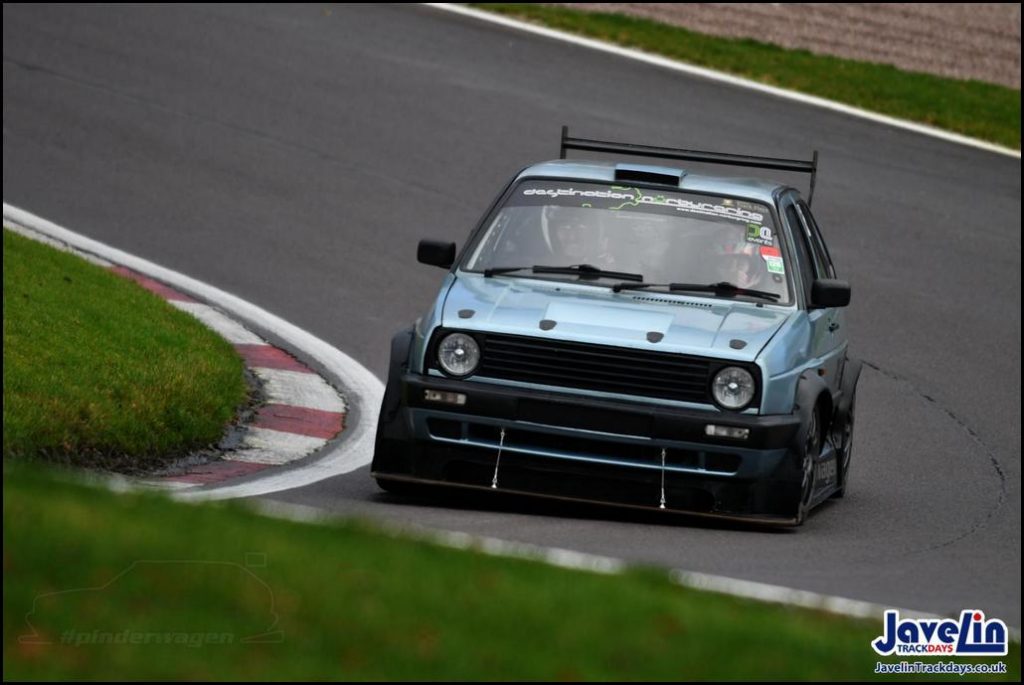 As the drying line became more obvious I was able to push on more and start running the kerbs to check the drivetrain held up. I was absolutely delighted that even in 3rd gear on boost I had no problems at all, no matter how much kerb I took 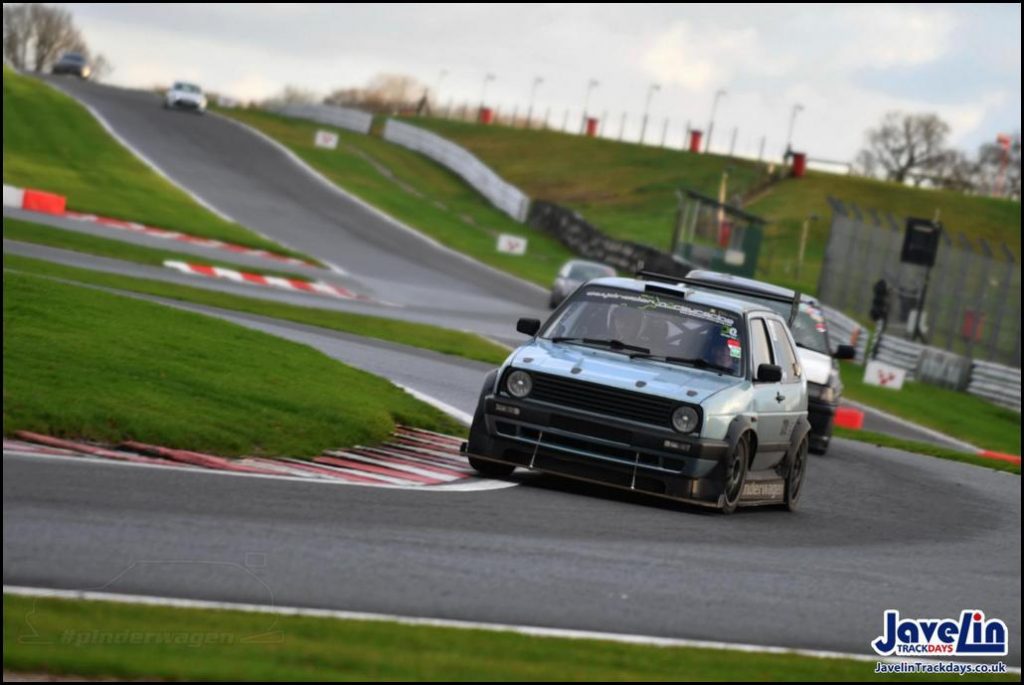 Back onto the Cup2’s and they were OK until Matt fitted his AR1’s. He could carry much more exit speed than me and stuck to my bumper for the whole lap. By now the marshalls had realised we were comfortable following closely and happy to lead / follow. They stopped waving the blue flags at the lead car and left us alone to have a play

I’ve experienced this before, if you go out in session 1 and sit on your mates bumper you get called back in, but if you take a few sessions where you follow but at a larger distance, then close up a bit more each session they realise you aren’t a dick and leave you alone. 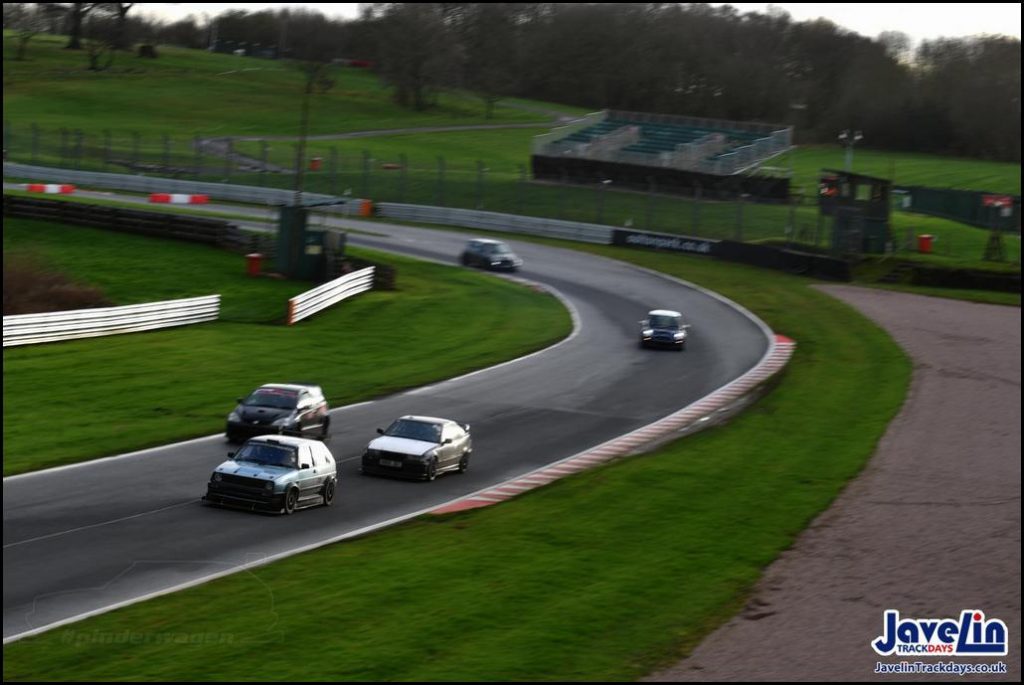 He got on the radio and spoke to race control, apparently there was another car there with 712 on and it was him they wanted to give a bollocking to not me. 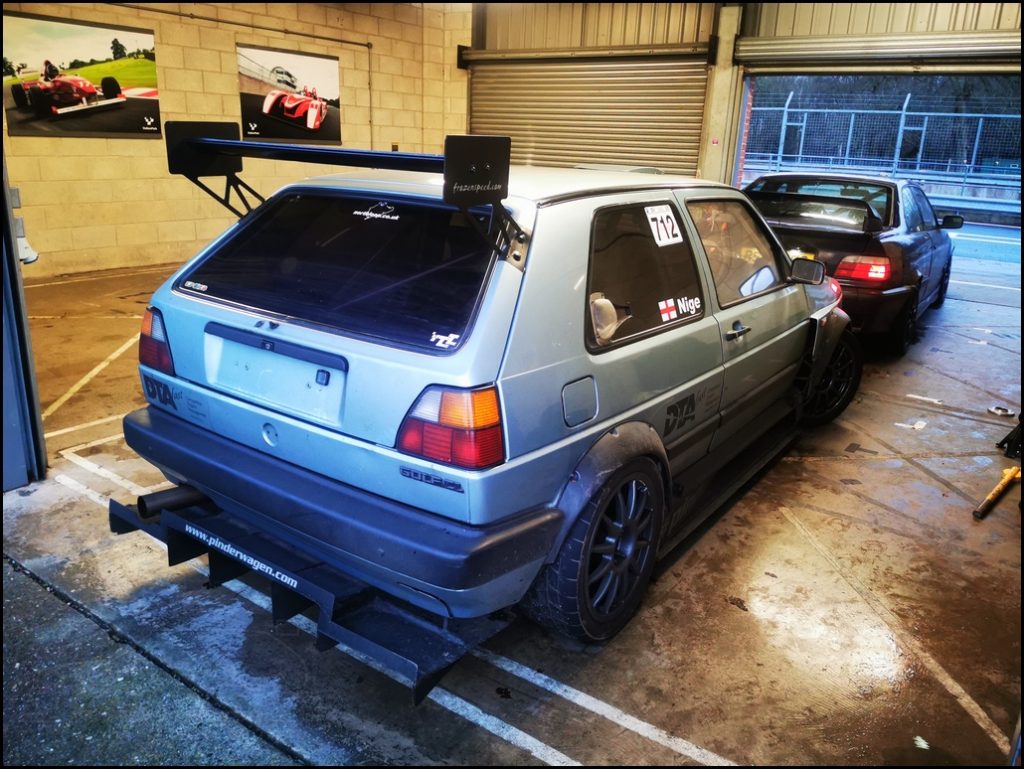 I was turning into the right hander then quickly lifting the throttle to start rotating the rear before immediately re-applying the throttle. When done correctly it unsettles the rear a little and helps straighted the car for corner exit. When done badly I end up with oversteer and lose even more speed on corner exit 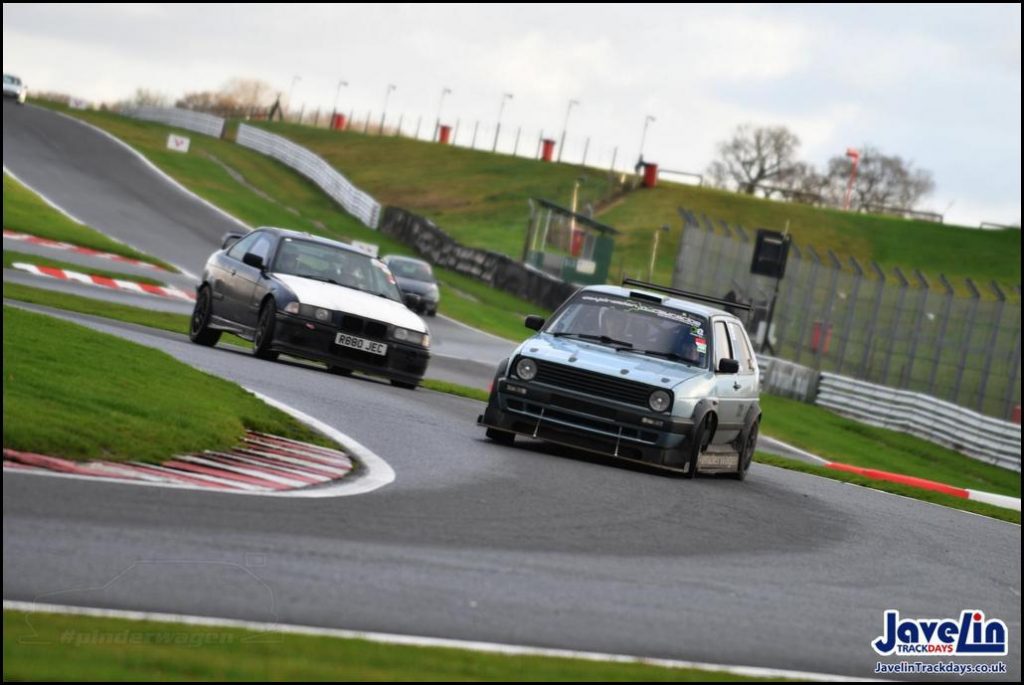 We’d been out for several sessions and mid afternoon went out for this half hour session.

You can clearly see where each car has it`s strengths and weaknesses. The power of the Golf means that overall I’m quicker over a full lap, but if I leave it on a lower boost setting the actual chassis differences are more obvious. As we’ve found many times, I can’t touch the E36 under braking and corner exit but on entry and especially mid-corner the Golf is quicker. The diff really makes a difference and tucks the nose in without the understeer Matt gets. We are tweaking his geo over the winter in the hope to regain that mid-corner front end although I don’t want it TOO good…

This entire session was exactly what I wanted. It was late in the day and all I’d done is put in fuel and switch wheels a few times. We thrashed the cars for 30 minutes without any problems whatsoever. Came into the pits, swapped passengers around then went back out and did it again. We were both buzzing afterwards and quite honestly I could have put it on the trailer after I was so pleased !

The track never fully dried out even though it stopped raining a few hours earlier. It meant care was required when overtaking someone off the dry line, both grip and braking was obviously reduced and it needed a little bit of thought when to overtake people. 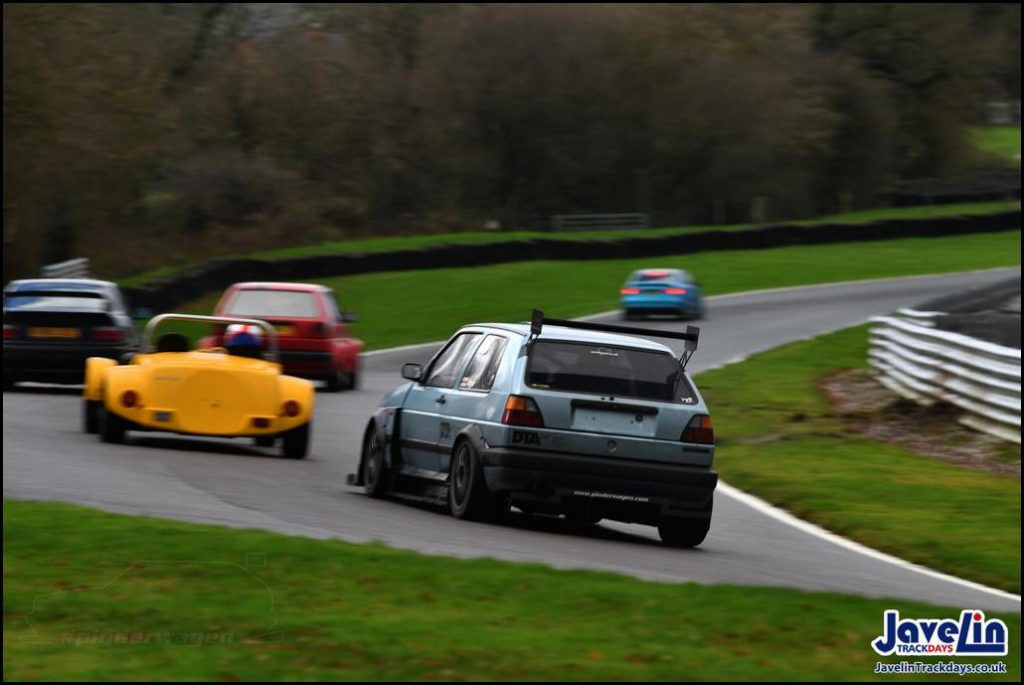 I tried both the wide and tight line through the hairpin and whilst the tight line is quicker, it highlighted the benefit of RWD on ecit. Matt always managed to pull a small gap on me as he could get on the power that little bit earlier than me without spinning up. 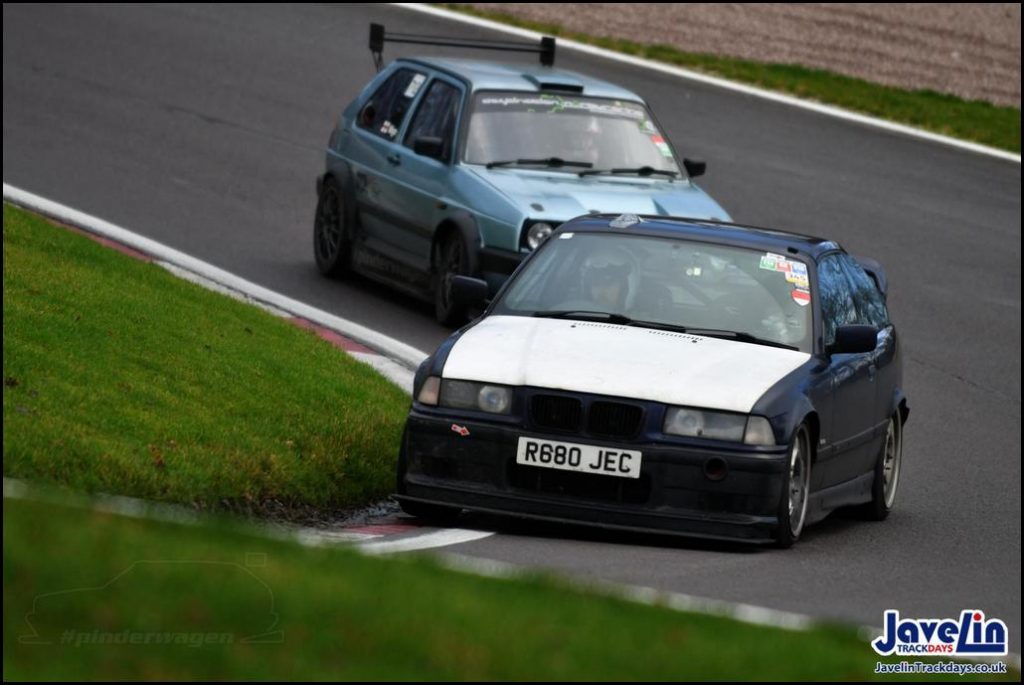 I drove just under 200 miles on track which I was very happy with after the few red flags we had. During those laps I put a splash of oil in and several Jerry cans of fuel. Swapped wheels 3 times as conditions changed and didn’t have a single mechanical issue. Today turned out to be one of the best days of the entire year, not only because I was lapping so close with Matt, who since the S54 conversion is much closer on the straights but also due to the simple fact that nothing broke and I drove the car hard for mile after mile. If you`ve read my reports from this year I have had trouble free days but the drivetrain has been an ongoing issue for the last several years. The engine failure in July was a particular low spot and whilst I would never wish to have failures, they do make you appreciate the days where you have no problems.

I have a few bits and pieces planned for the winter but nothing major. No engine removal, gearbox replacement or anything major at all.

After the lockdown in March I seriously wondered what sort of tracktime I’d get in 2020 but as it turned out I was able to get in 10 events and had some truly memorable laps.

Loading up onto the trailer knowing that if I had to, I could leave it there until the next trackday and simply unload it at the track was something I haven’t been able to do for a long time and I shall drive to the first event of 2021 with confidence. Whether that is misplaced, only time will tell… 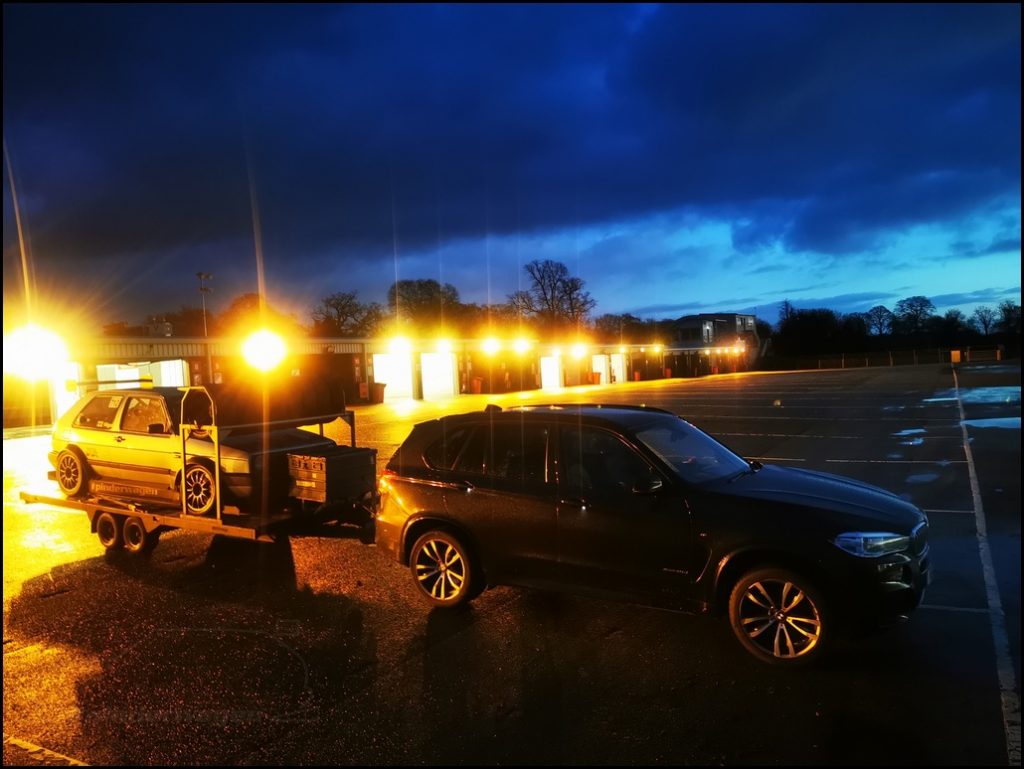 Around 30 minutes from home on the M62 and looking in the mirror I could see a lot of smoke. Pulled onto the hard shoulder and saw the tyre had failed. Pressures were OK this morning so all I can deduce is I had a puncture and then the tyre overheated.

Drove the short distance to the nearest sliproad then found a place ot change the wheel just off the roundabout. I`d rather get off the motorway asap and change the tyre where it`s safer. 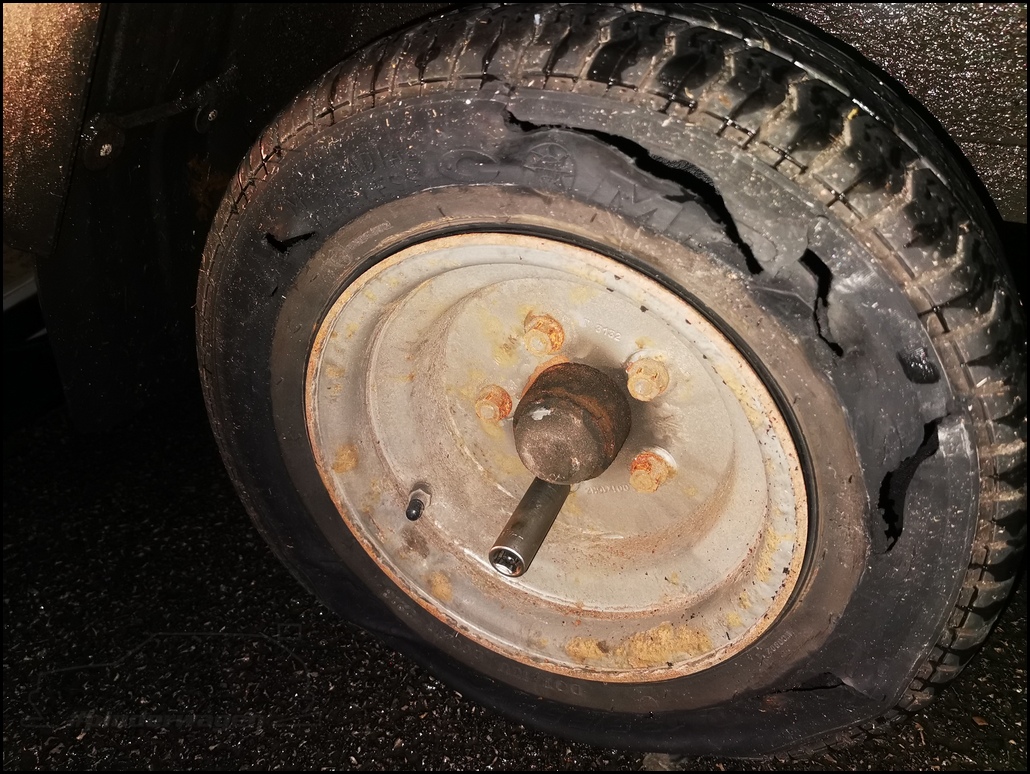