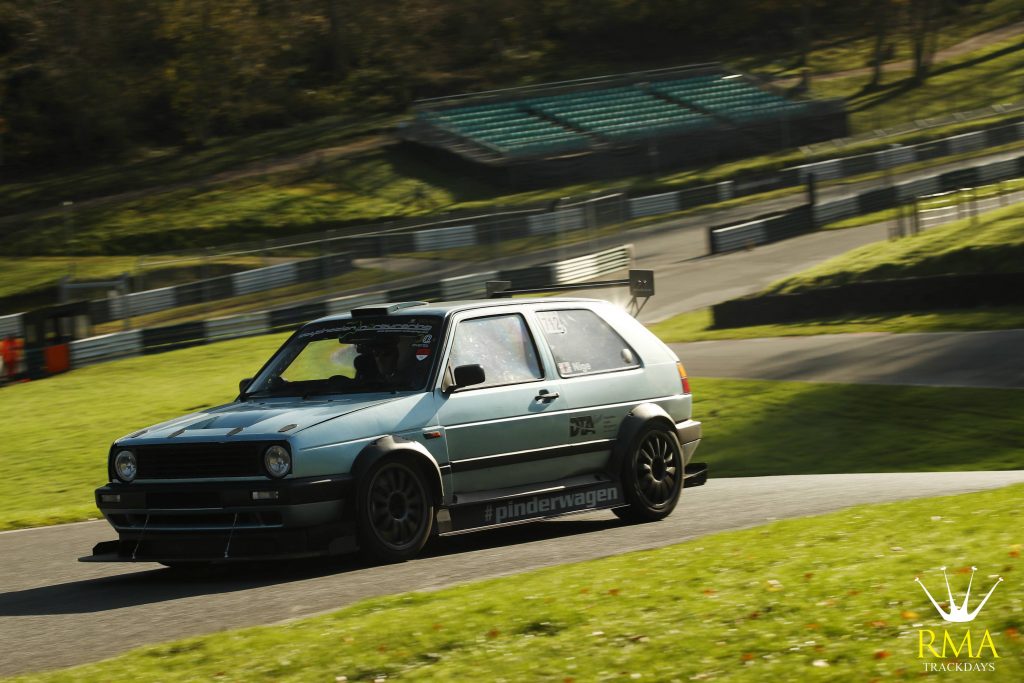 I hadn`t planned to do Cadwell again this year and was actually booked onto Donington tomorrow. The pending lockdown meant that day wasn’t going ahead but RMA sent out an email saying they’d managed to get a day at Cadwell instead on the last day before lockdown. Count me in ! This could be the last trackday of 2020.

The Golf was already loaded up for Donington so no further prep was required, Cadwell is under 2 hours away so an early start and steady drive across saw us arrive to glorious weather and even though it was a bit chilly the clear skies meant I could look ahead to some good tracktime. It had rained last night and the track and paddock was still wet. As it turned out it would be several ours before a dry line appeared. Ilya was there in his Clio and I was hopeful we’d be finally able to get some laps together on track. He planned on a few steady runs in the morning to check everything was OK and then we’d go out for some chase laps after lunch. Leyton held an outside briefing which felt pretty weird after ding all the online briefings through the rest of the year. I understand it’s the only time the TDO’s can interact with all the drivers and put across their USP, but given the choice I’d prefer the online briefing everytime. What was immediately obvious was the low number of cars on the day. RMA are one of the higher end TDO`s which quite simply means they charge more money and have less cars on their day. Today was only a little bit more than a normal Cadwell day yet still had low numbers. Whilst Matt took off his road tyres and fitted his very well worn set of AR1’s, Dan unloaded his lovely Exige. Queued for the sighting laps and quickly realised traffic wouldn’t be an issue today. There weren’t many cars here at all ! No passenger today so it was a case of going out by myself and getting used to the new gearbox ratios. Within 100 yards of leaving the pits on the sighting lap I saw a huge grin on my face.

The gears have a much straighter cut than a standard gearbox which makes them stronger and has the added bonus (to me) of giving them a lovely gear whine as the speed increased. Not quite as a good as a straight cut dogbox but not far off.

The actual box was superb and for the first time ever at Cadwell, I could drop into 2nd for the hairpin with no crunching or difficulty in engaging the gear. I found myself in the wrong gear a few times, I’m so used to the old ratios that the closer Quaife gearset caught me out a few times where I dropped into a lower gear and ended up having to change back up as it was too close to the limiter but after the first few laps I was fine. It was only an issue in the first place because I`ve done Cadwell so many times that I subconciously think ‘I need to be in 3rd for this corner’, where with the Quaife that may be 4th. I spent a little bit of time in the first session trying different gears to see which felt right and from then on it was great. Matt and I agreed we’d each do a few sessions to get a feel for the track and then start going out together. I’d been following him for a few laps when he slowed quickly approaching Hall Bends and then coasted to the hairpin. This is pretty unusual, infact I don’t recall him ever breaking down on track before. He’d freewheeled into the exit road by the hairpin so didn’t stop the session. After being towed back we quickly found the fuel pump wasn’t priming. The 40A fuse had blown. Checking the contnuity of the wires and we found the main pump feed had rubbed through somewhere and was shorting to earth. A new temporary feed from the fusebox to the pump fixed that for the rest of the day. Once back home a new wire was run in the existing loom and the old wire was removed. I was on the Pilot Sport Cup 2’s and wasn’t getting on with them as much as the old Cup 1’s I used to have. They squealed more than I was used to and the initial turn in and ultimate grip just wasn’t as high as with the Direzzas I usually run. They are OK but not as good as expected. A red flag as I was approaching the mountain meant I had to come straight into the pits with no cooldown lap. Left it idling for 10 minutes as the EGT’s were high and a quick look at the manifold made it pretty clear turning it straight off wasn’t a wise move. One of the few times I`ve left it idling to cooldown with the bonnet open but the heat coming from the engine was significant. Back out for another session and the track was starting to dry nicely.  A lack of wind and not many cars meant it was taking a while but slowly drying and I was able to really concentrate on my lines and braking points. . Caught Inderjit in his E92 later on ond he tagged onto the back of me then Dan caught us in his Exige. Was ging really well until 7:15 when the brake pedal went almost to the floor. From experience I found this can happen if the CV hubnut has sheared off and I immediately slowed and came back into the pits to check. Turned out it was just pad knockback from running the kerbs in Hall Bends but I didn’t know at the time and wasn`t prepared to risk it. Changing a CV is pretty quick, but if I keep driving and damage the bearing it’s at least twice as long to repair.

This session really showed the tyre difference between the E36 and the Golf. I just didn’t have the apex speed Matt was able to carry. I could catch him using the extra power the Golf has but as we found several years ago, once it gets to the braking zone I just can’t live with him. The E36 is far more stable under heavy braking, especially in damp conditions. Somewhere like the Ring where you never fully anchor on and I’m OK but at the end of Park straight he gapped me everylap. Going round Chris Curve and I was able to get on the power much harder and close back up again as the diff pulled the front end round much better than Matt’s did, although this difference was reduced today due to the tyre difference. It’s finding where one car is stronger than the other that we both enjoy. Over a lap we are similar to each other in performance, the Golf has more power to weight has better entry and mid corner apex speed in 3rd gear corners but he has better traction out of corners and is way better under brakes.

Another session where I lapped without a single problem and I was really starting to get ontop of the gear ratios and was no longer thinking about which gear I needed to be in. All engine and fluid temps were well under control and I could lap for 20 to 30 minutes without any worries at all apart from the front tyres starting to overheat a bit. Back out after lunch when I caught the Alfa. Followed him over the mountain and through hall bends then he indicated and moved right on the exit of Barn to let me past. I choose to believe the driver was new to the circuit and there was zero malicious intent in what happened next.

The driver is still to the right so I start to overtake. Note his eyeline is most likely in the distance and following the yellow line. The problem is the left of the circuit closes in towards that yellow line.
I just expected him to continue to move right like every other car that indicates and moves to let you past there. I was focussing ahead and not really paying attention to him until I saw him closing in on my right hand side. I immediately lift off the throttle but just at that moment my front left hand wheel ran onto the grass and dragged the car sharply left and onto the grass. Even though it was pretty bumpy I managed to maintain control of the car and was looking ahead to get back onto the circuit. Sadly the grass is much higher than the footpath and the splitter hit the raised grass HARD. Drove slowly round the circuit and back into the pits to see just how bad the damage was. The drive through the paddock when the front is covered in grass usually gets quite a few looks and the odd person pointing at the car. Today was no exception Whilst still intact the splitter had taken a bit of a beating it was unbroken and still in one piece. I`d have been pretty upset if it had broken, I only fitted it last week ! The front hook mount on the passenger side had sheared off. This is actually intentional as I made the brackets strong vertically where the load is but less so if the splitter impacts something. I want them to snap rather then bend and cause the damage I saw at Croft. For the first time in many years I ran the rest of the afternon without a front splitter. As you’d expect I noticed it most around Coppice and Chris curve. 2 high speed corners where the front naturally wants to wash out and the splitter usually helps counteract that. Matt gapped me through those sections and if I tried carrying more speed it just understeered.

It confirmed to me the question of “Does all this stuff actually do anything” Even though I knew the Golf handled better with the Aero it`s years since I ran without and never saw the need to remove it on a trackday. This was a back-to-back test on the day on the same circuit and I can now say that I won’t be removing the Aero in future. Not quite the end of the day I wanted but knowing the car was sound and the only damage was to the splitter support meant the fix would be pretty straight forward once I returned home. By the time Matt had switched back to his road wheels and I’d finished loading the Golf with the tools and spare wheels we were one of the last cars in the paddock. If this was the last trackday of the year it was not a bad way to end, both cars were still running but for me the afternoon wasn’t as good as hoped.

The whole RMA USP is overtaking on both sides (with consent) and as I said to Leyton, I just don’t think it worked or added anything at Cadwell. The nature of the circuit meant the only time I felt it added anything was if cars stayed left out of Mansfield you could go past without concern on the right but everywhere else people moved over to the right to let you past apart from in the morning when it was damp and they stayed left on Park straight on the drying line and if you wanted to overtake you took the wet part of the track.

I suspect on other circuits the either side option works well and I will do doing more of their days in future.