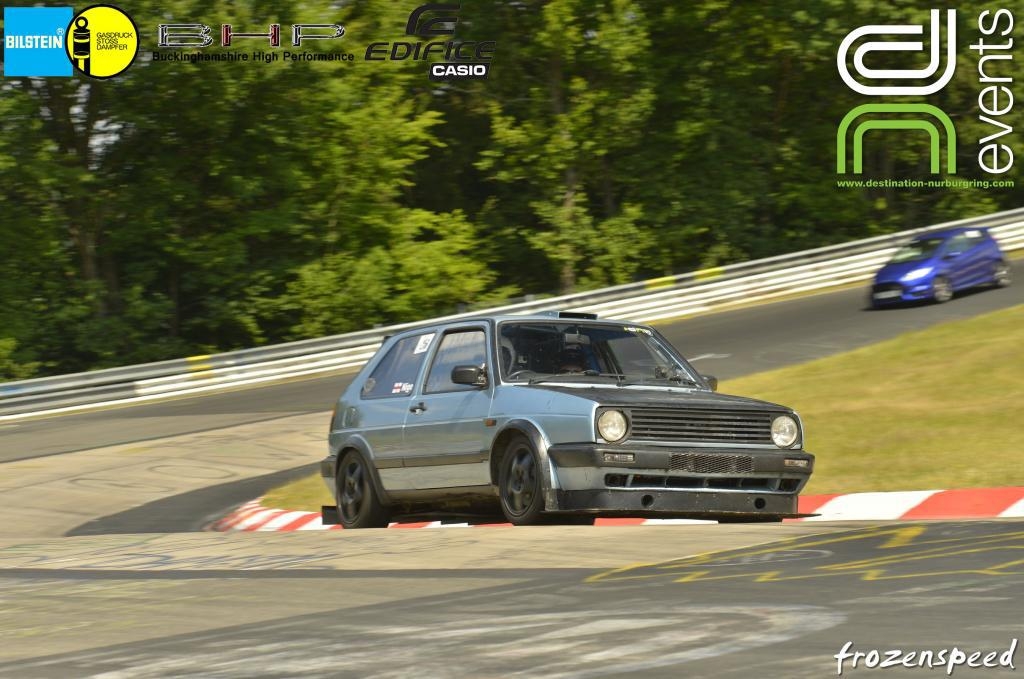 On the drive over, Matt and I tweaked the boost control map to reduce pressure above 6,300rpm to the `low` map of 0.5Bar. This was the first time I was taking the Golf to the ring with the Turbo and after the recent issues and lack of dry testing, I wanted to be safe.

As fuelling wasn`t spot on at high revs, I sacrificed a tiny bit of power above 6,500rpm for safe fuelling. The general boost was tweaked downwards a little too, again for safety.

Yes, I could have run more, but until I`ve had a good period of reliable trackdaying, I wanted to stick with what I knew was safe. Performance should still be adequate and as I`ve said from the very beginning, I want driveability over outright power anyway.

After the signing on, we went to the Burgstube for a bite to each and catch up with old friends.

Wednesday morning, early start to get the Golf unloaded and help with the signing on and setting up and then after the briefing it was time for the rolling sighting laps. I drove the first lap, just to check it was all OK. Oh yes, it certainly was ! Even with low speeds, the engine felt strong, brakes good, although a little lacking in feel compared to Carbone Lorraines. The steering was pulling to the right slightly, which was confusing as I`d recently checked the alignment with the `string method` and thought it was OK.

Back into the pits, a slight tweak on the steering and Matt took it out for a lap, again on the rolling sighters. The plan was for me to drive most of the time, but Matt to do the odd lap. Straight away, he commented the steering wheel was too high, not centred, gearlever was stiff, pedals weren`t as good as the E36 for H&T and then he put his foot down. The stupid grin that spread across his face was wonderful to see :veryhappy: He lifted off and did it again just because he could

Back into the carpark, quick once over, nothing leaking, nothing appeared loose. Right, lets go do a lap. Just about now, Oakies old MK2 1.8t demolished itself in the Foxhole.

Once the track reopened after clearing up the debris and repairing the armco, everyone went out. A lot of cars all went out together, so it was fairly busy. I had the PBox on Speed, I asked Matt to look at the speed approaching SX and up Kesselchen.

Braking for some corners was trickier than before, others was fine. Main area of concern was for Breidscheid, I was having to brake much earlier then before to get it slowed down. Not really because of poor brakes, just much higher approach speeds… 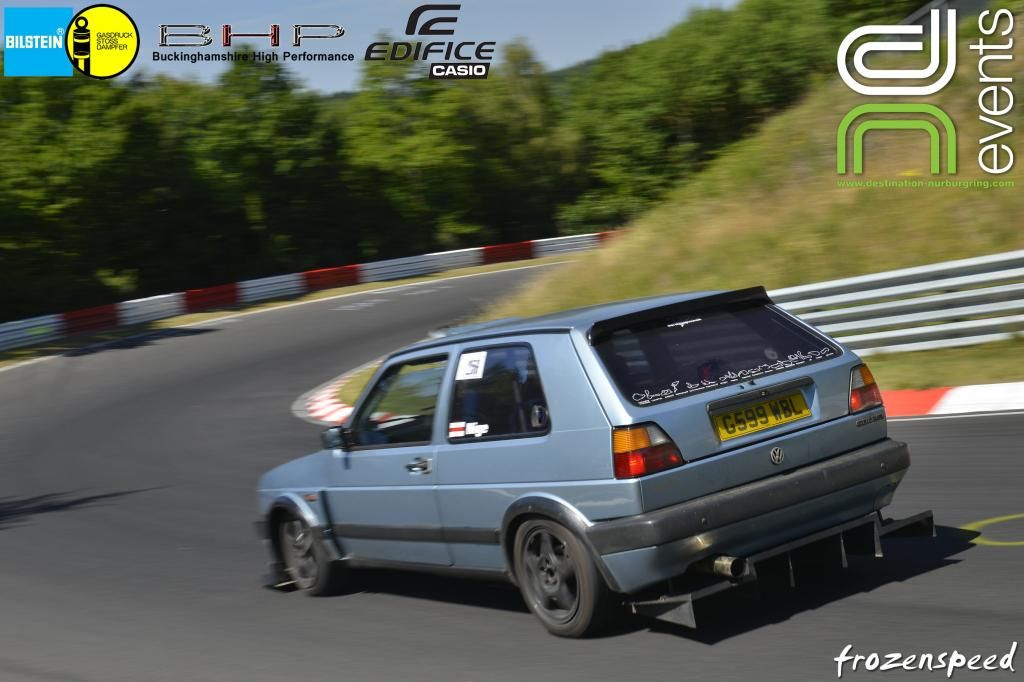 Most of the morning was spent having to tweak my lines / braking to take into account the extra speed. Started pressing on after lunch and had some great laps. Clearest lap of the trip was Wednesday afternoon, pretty scruffy and not my tidiest but looking at the data after the event, it was my quickest `not-stitched` lap at 8:05. Without yellows / traffic, the pace of the Golf was well into the 7:xx`s 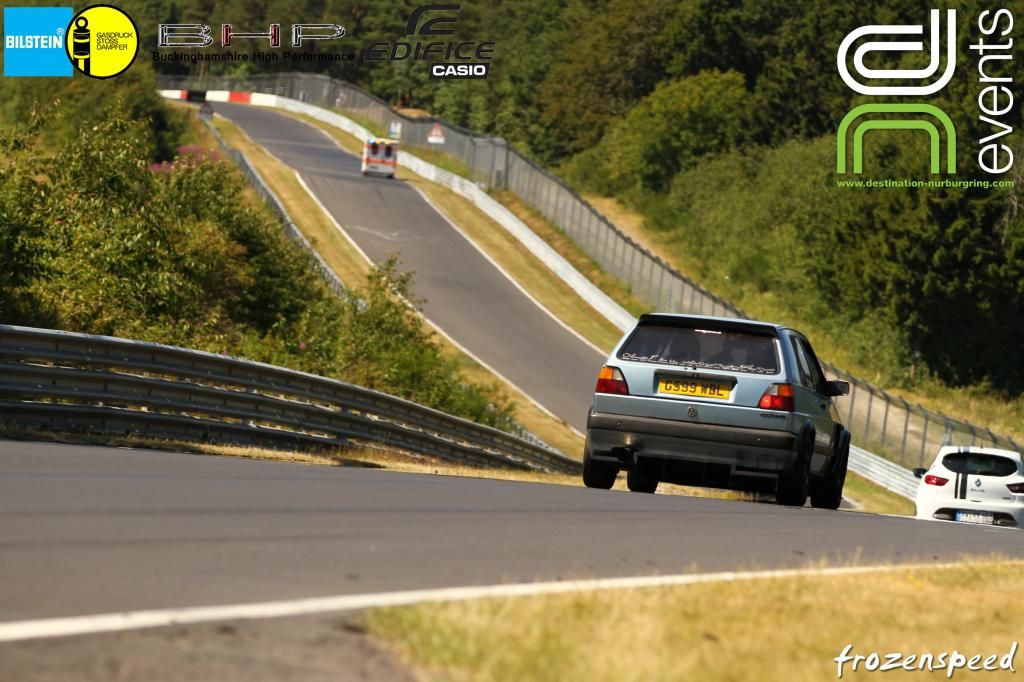 11 Laps in total, over to Michealas for a BBQ and good conversation

Thursday morning and it was even sunnier ! After some right hand side overtakes and general daft driving, everyone was given an individual reminder about driving standards before going out. I ended up with Michael Vergers in the Radical. He just sat there as I gave him the `talk`, stared at me with a `REALLY ??!!??” look on his face the entire time then said “ok” and drove off

Did a few laps back in to check it was OK then Lizard and I went out to do 3 on the bounce. I`d said to him before that I was NOT keeping it nailed down DH, I just didn`t see the point. 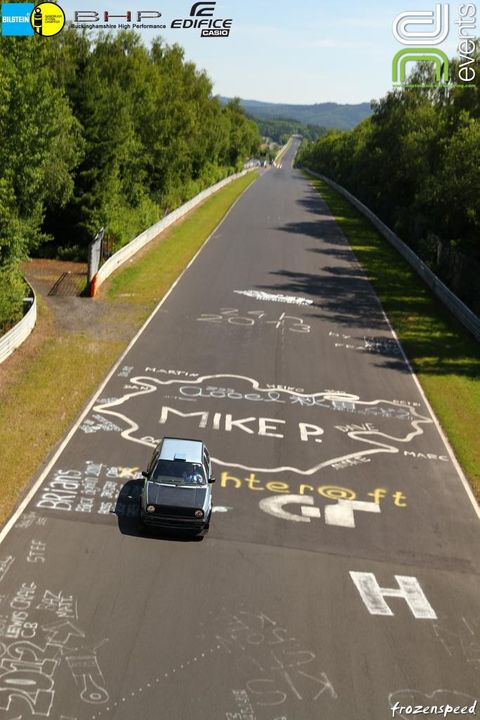 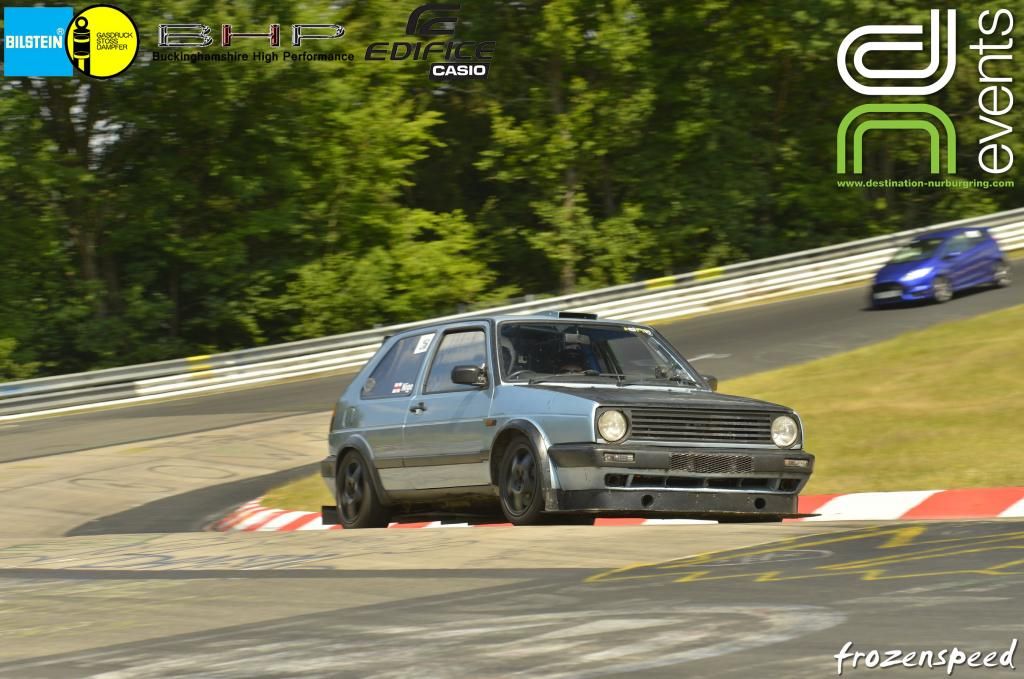 After a couple of laps behind Alex, he pulled over and followed me. I knew I had the legs on him, so lifted off to keep it close. Unfortunately, the rear camera memory card corrupted, so I didn`t get a single bit of rear-footage, even though we recorded every single lap. brickwall

At Galgenkopf, we were still together. 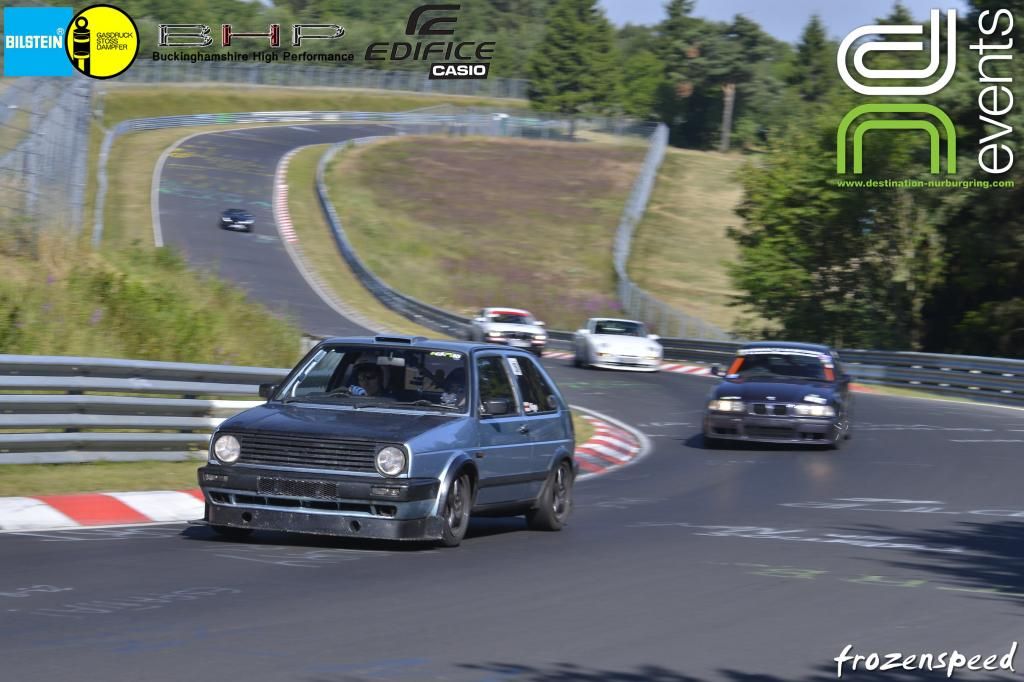 In the carpark, Alex said “that was closer than I expected to be honest..” I replied that I`d lifted in places to keep it close, he seemed sceptical and I thought there was no need to go into detail..
http://www.youtube.com/watch?v=R353Y6PC2pU

I`d had loads of requests for passengers, so tried to take people out whenever I could. Unfortunately, I cimply couldn`t take out everyone who asked, particularly frustrating was not being able to take out Richie from MM, but I never got to see him. in the carpark?

Not lifting before the jump meant a quick dab was needed afterwards. 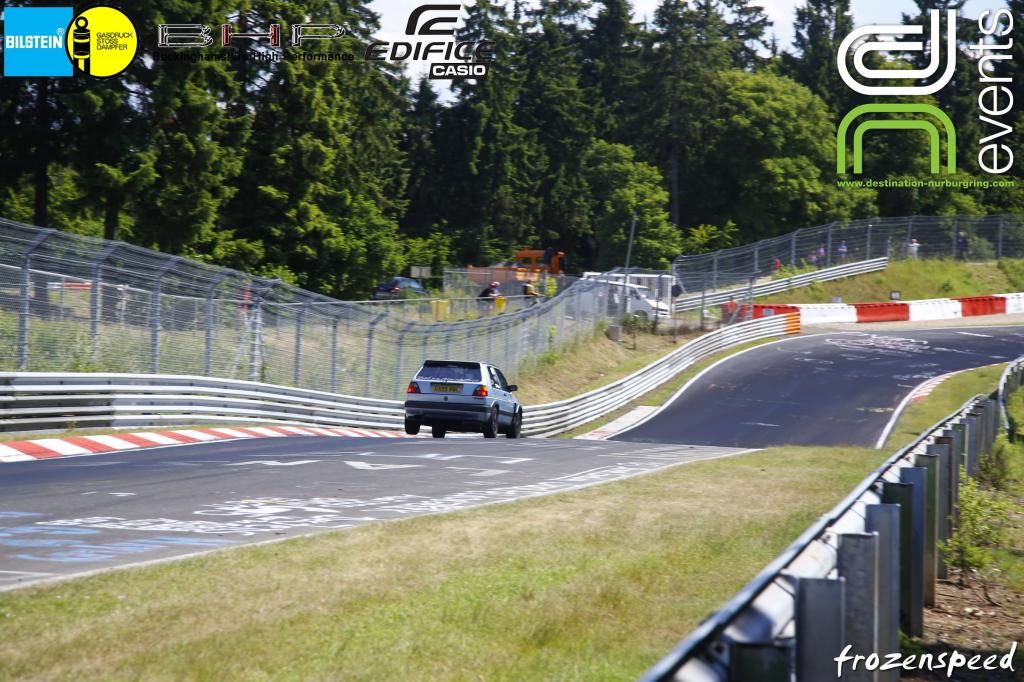 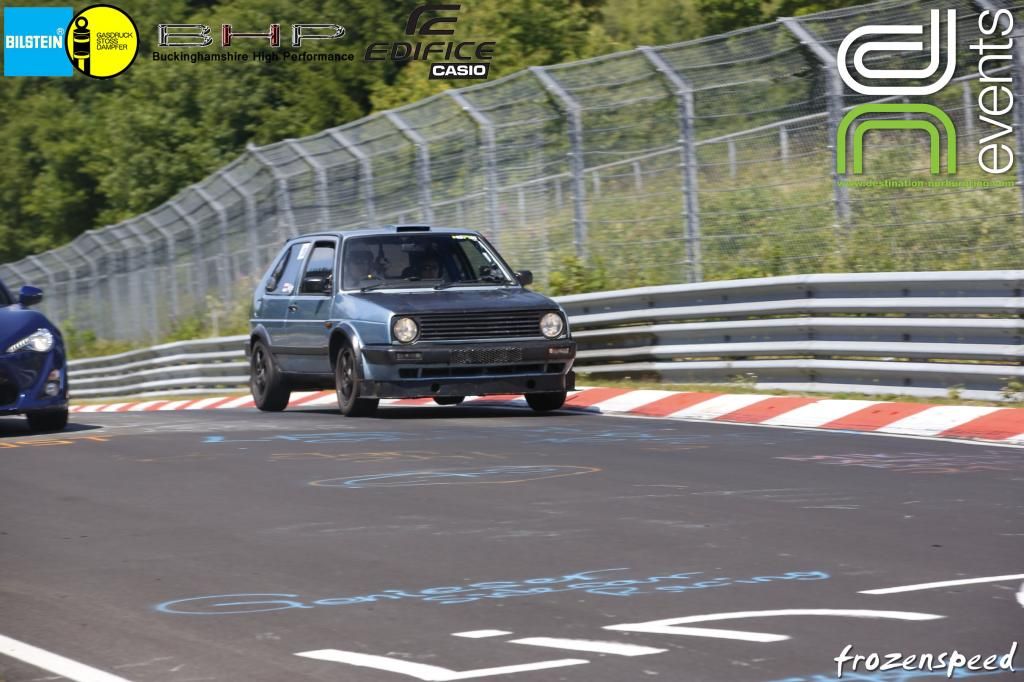 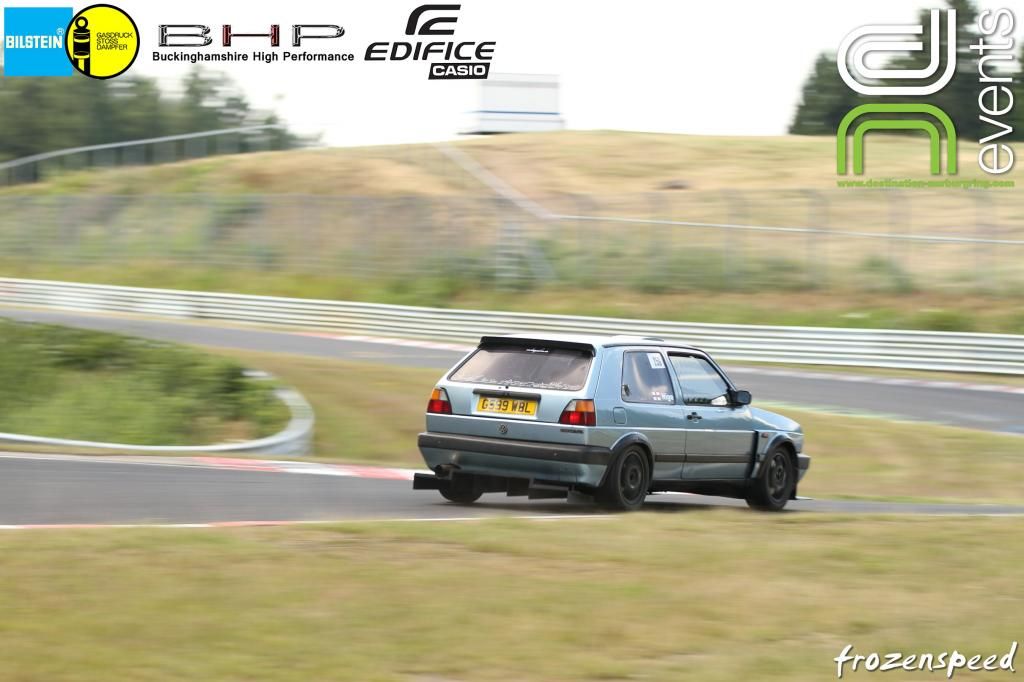 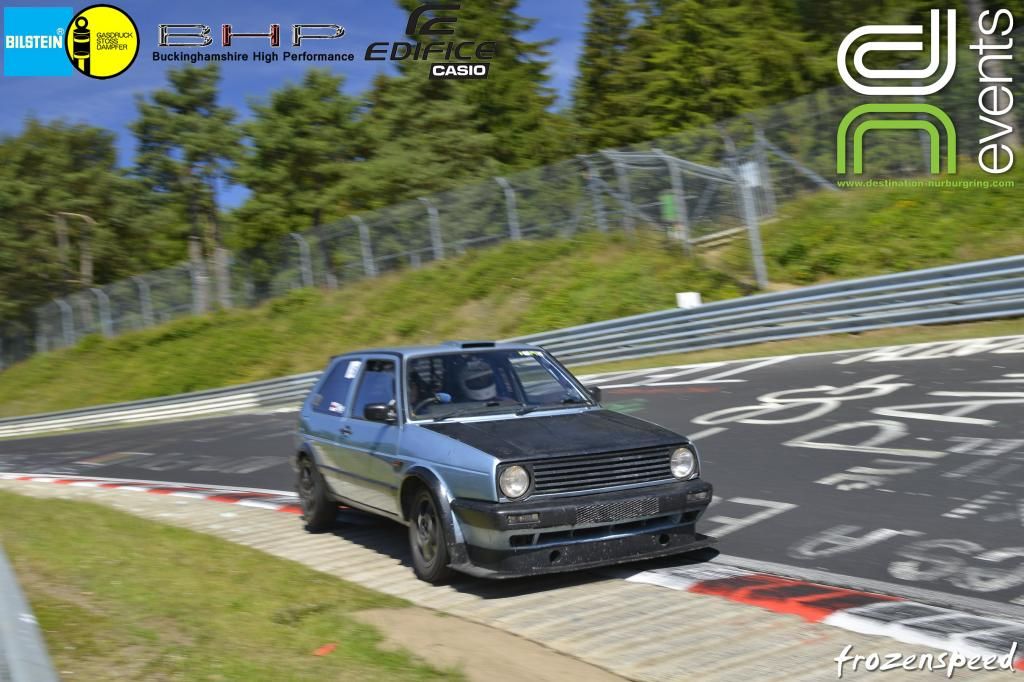 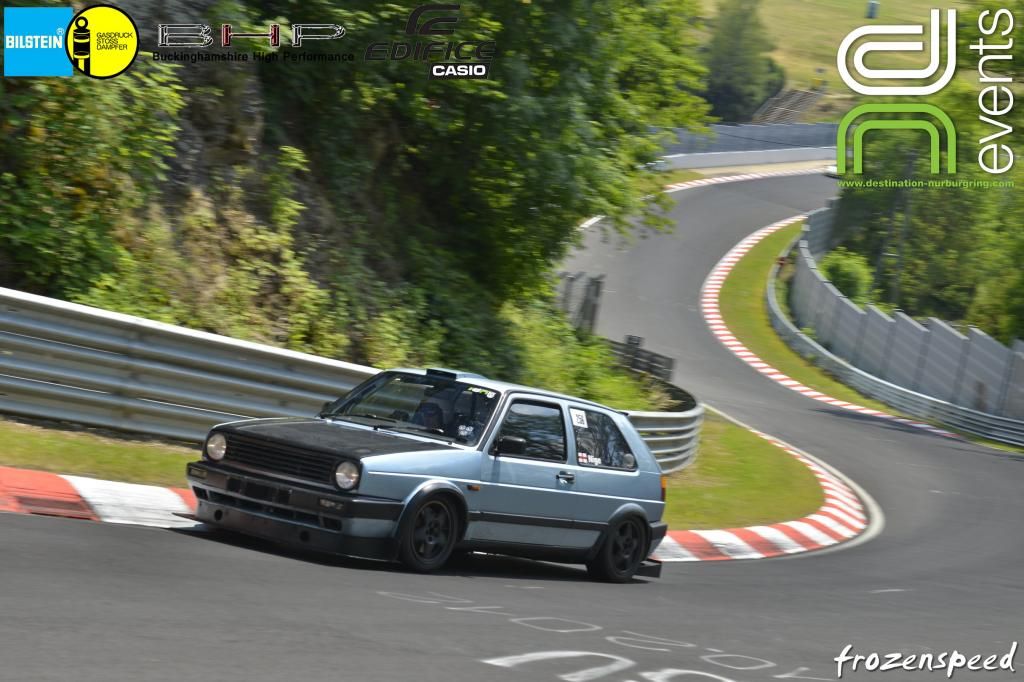 Details don`t really matter on this pic, main points to note are the water temps (Yellow) and post intercooler temps (Green). The water rises in the carpark but sits at about 90 the entire time I`m on circuit.
Inlet temps are in the low 40`s, but peak after sustained high load runs. 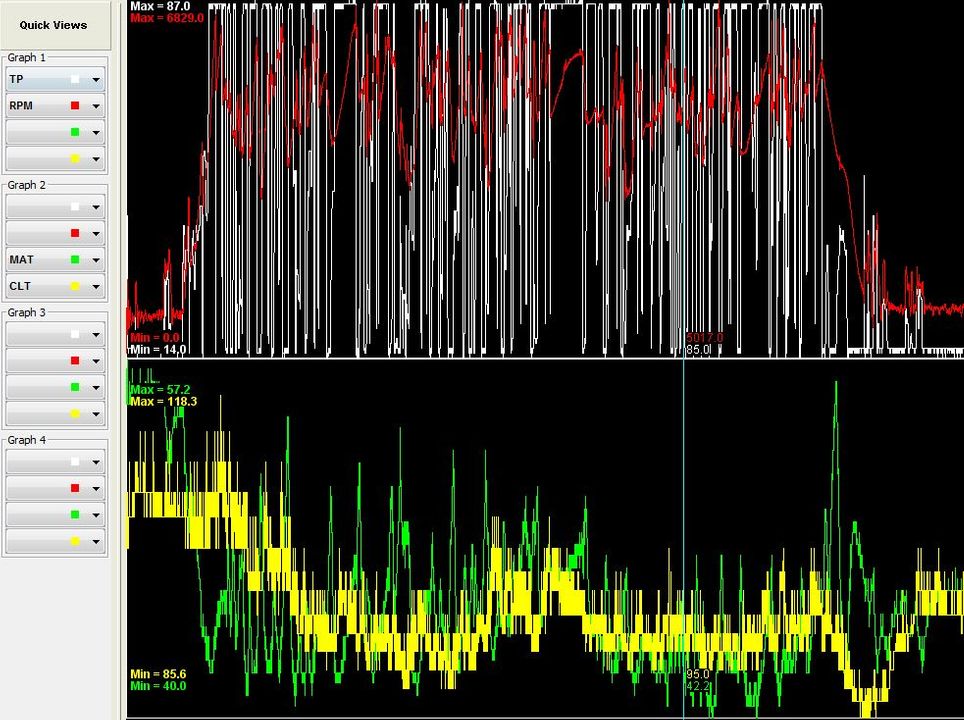 A bit more detail up Kesselchen shows the IAT`s sitting pretty stable all the way until I lift around Mutkurve, then they rise to 50Degrees. I`ve noticed this phenomenon on every trackday, after lifting, I get a spike in IAT. 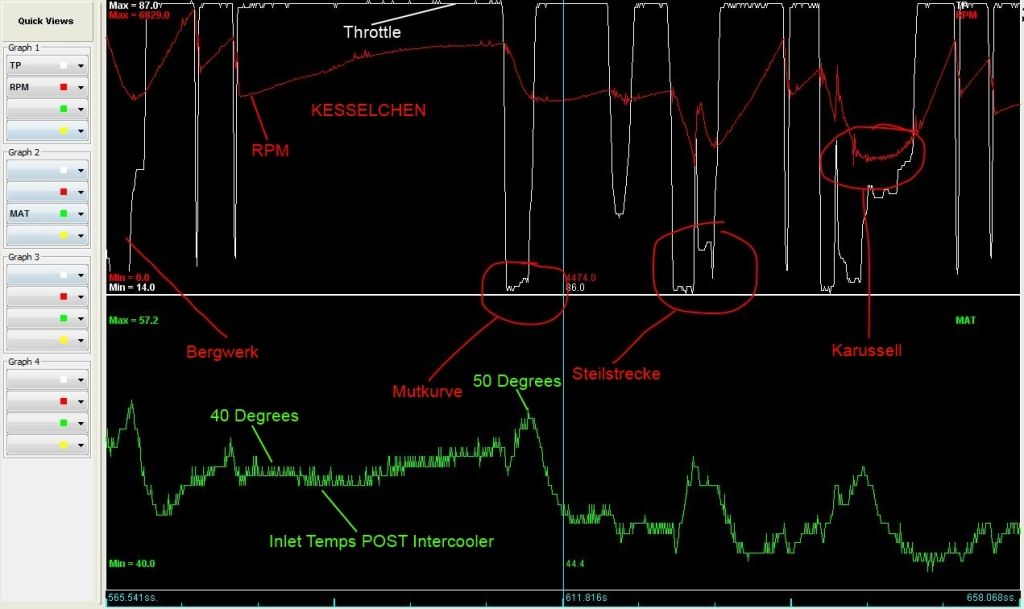 I will be adding an extra fan to the radiator, once hot, the single fan can`t cool the water temps enough if I`m in the carpark and have no airflow. I have plans for this before Goodwood. Same with IAT temps, I need to box in the intercooler to force more air through it.

Some Chap in a borrowed Atom asked if I fanced following to get some video.

Yeah, why not…
Let’s kick it off boys!

Same lap, but footage from the Golf.
https://www.youtube.com/watch?v=c04bw4FZDWE 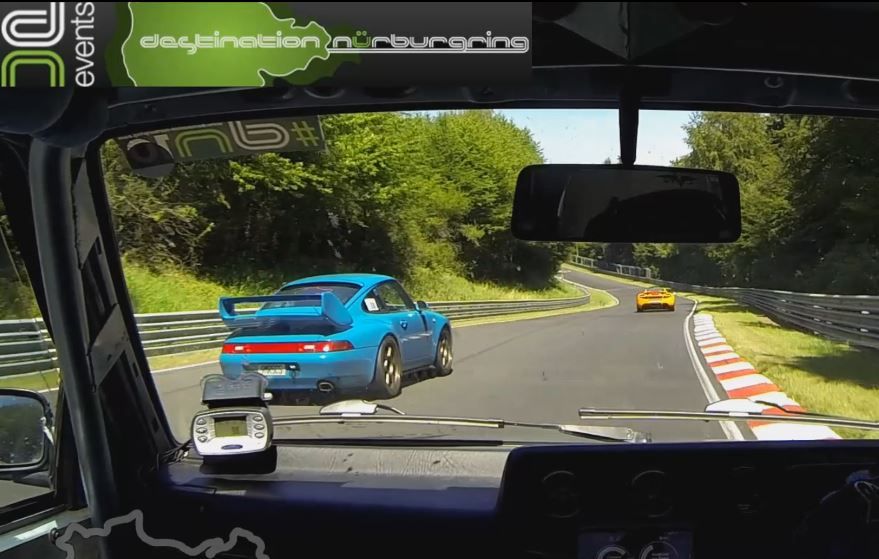 Porsche passes down the foxhole.

Had a good chat to the driver afterwards, we both thoroughly enjoyed the lap

Anthony (Fitz`s mate) had followed me for a lap on Wednesday, I indicated for him to pass, but he was happy to follow and we talked about it on Wednesday evening.

AndyC FINALLY managed to find an opportunity to jump in for a few laps, as we left the pits with Klaus ahead, Andy became pretty animated

A video from Anthony in the 997.2 Turbo following me.
https://www.youtube.com/watch?v=PEkO…ature=youtu.be

By the end of the day, I was really comfortable with the car and was pressing on. What turned out to be my last lap of the day could have finished better. I`d been feeling the inside front wheel skipping a little going round Eiskurve and on the last lap, the inner CV cried enough. I think the fact it was on high throttle, spinning up then touching the tarmac was just too much for it.

On an earlier lap, you can see it`s pretty unloaded. 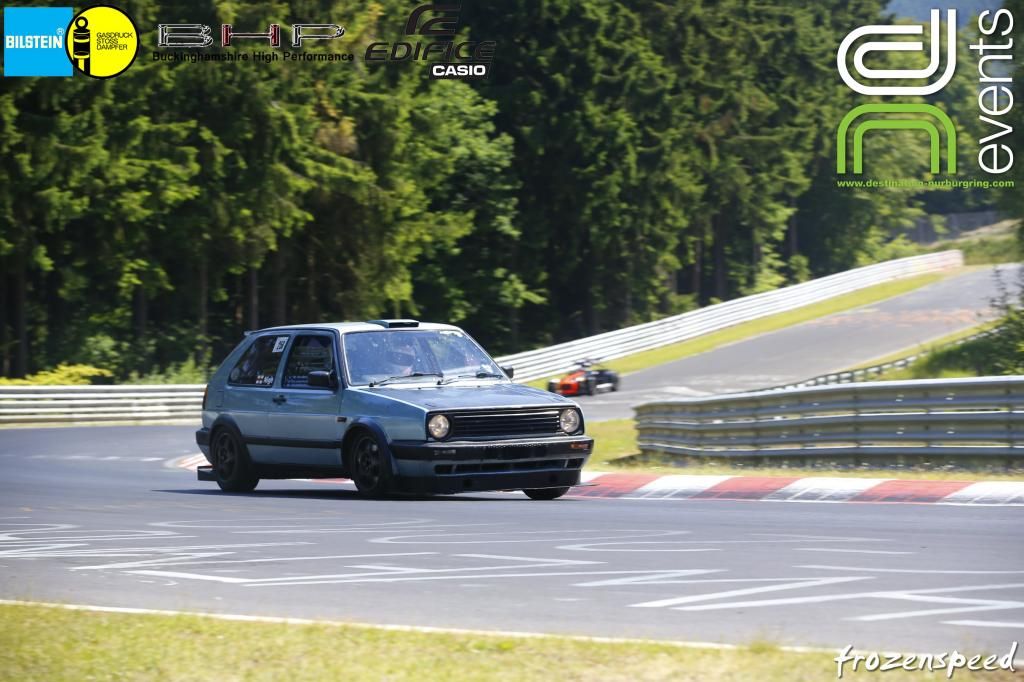 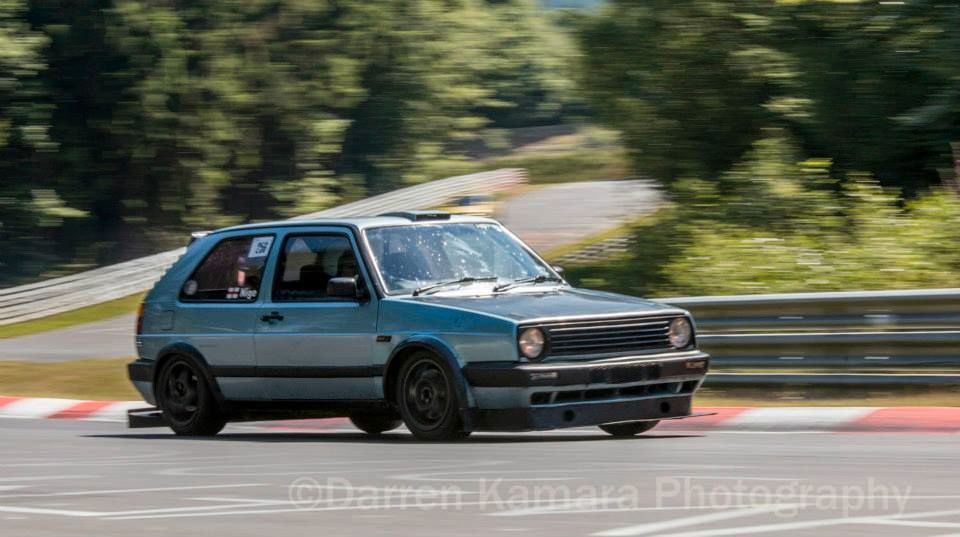 I`ve stopped enough times to know where most of the safe spots are, so I pulled onto the grass, put it into neutral and rolled backwards until I was well behind the armco. 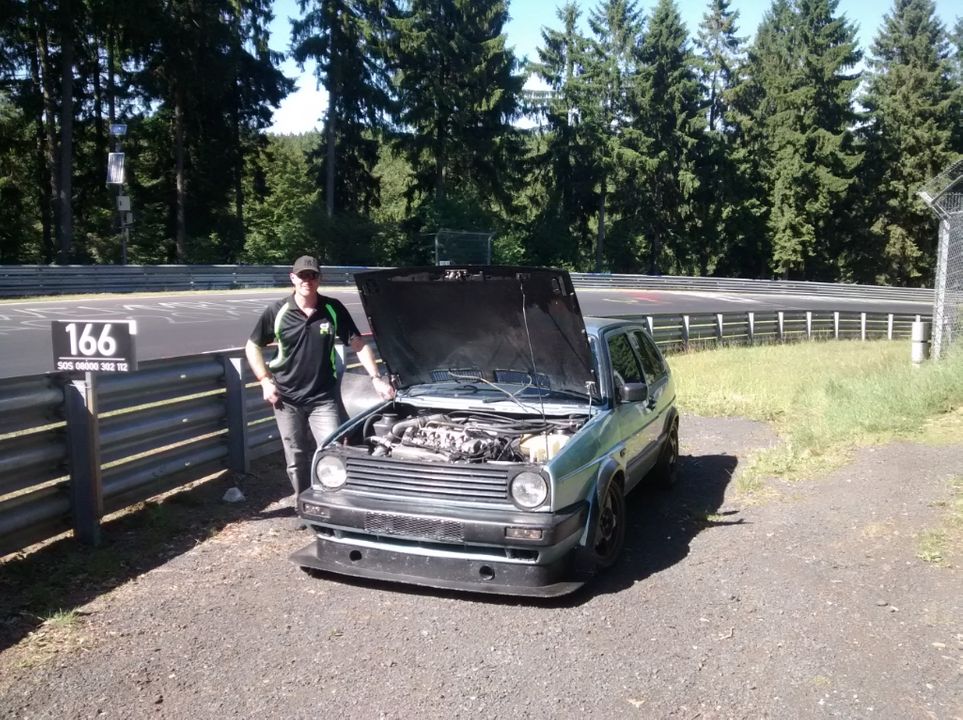 Popped the bonnet, Matt jumped out and I slowly lifted the clutch. He shouted `Stop` straight away and said the CV had gone. Gearbox was turning, but the driveshaft wasn`t. Smoke was seen from the overheated grease. 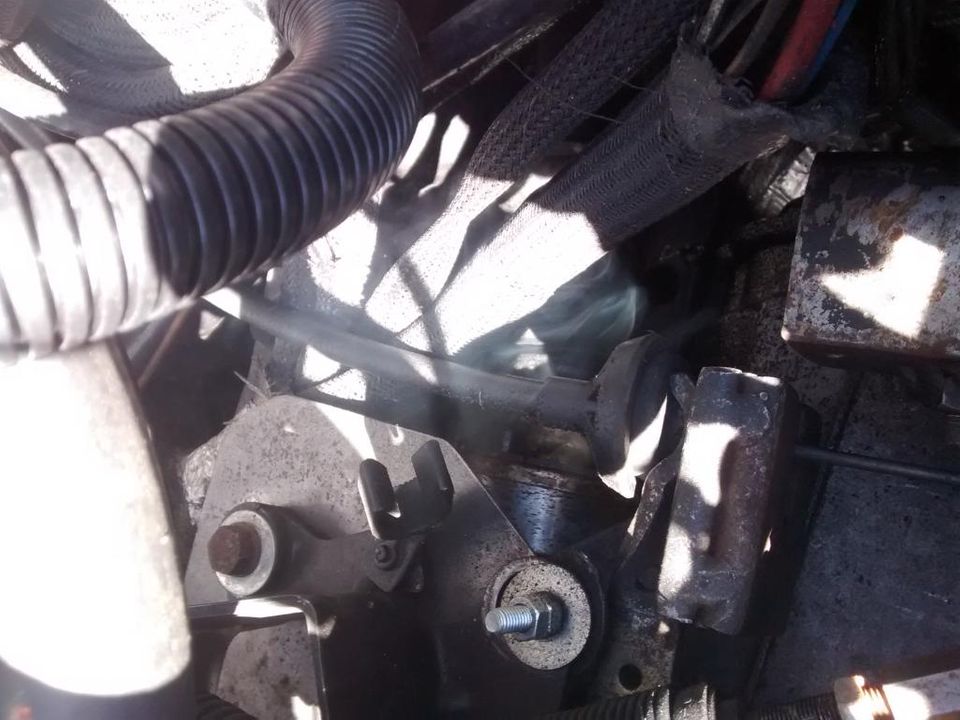 If this had been earlier, I had a spare in the trailer and could have fitted it and been back on track in under half an hour, as it was, the track was closed so I missed about 1/4 of the lap. The recovery driver dropped me off at the carpark next to my gear and we pushed it back on the trailer with help from Ian H.

I honestly couldn`t care less ! The car had not only been reliable, but it had been quick, driveable and put a huge smile on my face.

The roof scoop was fantastic, it really made a massive difference, but reservations about the visual aspect of one still remain, but the amount of cool air supplied to the cabin more than makes up for it

Loaded the car up, shower, quick change then off to the CC for beer.

It really brought back some great memories of many enjoyable evenings spent there. Good food, good company and a real `buzz` about the place. A shame we don`t go out more often, only doing this once a year isn`t enough

We all called it a night well after 1am…

IF the engine had blown up after a lap or something silly, I`d be breaking it now. I`m delighted to report that isn`t the case, it ran without a problem and I just need to give it a pre-Goodwood once-over and do a few bits. Even with such low boost, it was plenty quick enough. I don`t recall ever sitting there thinking “I wish I had another 50HP”. Well, perhaps I do, but you know what I mean

Was DN10 a success ? There were some unfortunate closures, but we were driving the Nurburgring, on a glorious summers day with people we know in a car that was reliable and quick. Of course it was a success !!

I`ll be there again next year, that`s for certain.