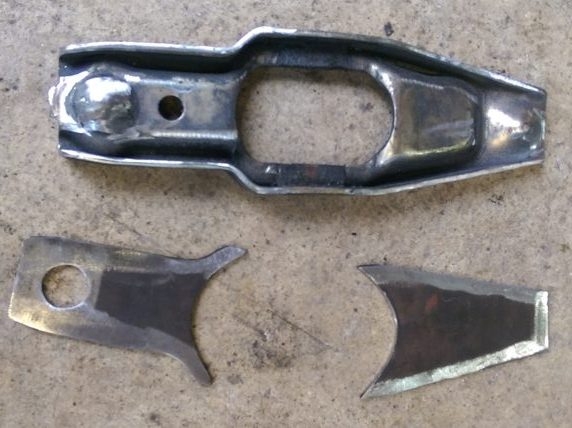 The clutch was struggling to engage and disengage at Silverstone and I thought the clutch fork was failing. This is not uncommon on the 02A and 02J gearboxes. The leverage from the pedal puts strain on the centre of the arm and it cracks and bends meaning the pedal has no effect on the release bearing and pressure plate.

This is not my release arm but a photo showing a typical failure of one. As it turned out my release arm was undamaged However whilst the gearbox was removed it seemed a sensible move to strengthen the release fork to reduce the chances of it failing in the future. I have 3 forks I`ve acquired over the last several  years so I picked the one in the best condition Cut out a template from an old juice carton Scribed onto some 3mm plate Cut out the reinforcement pieces It is important to test fit the arm with a release bearing fitted and move it through the full range of motion it will experience when the pedal is pressed. You need to ensure the bearing never touches the plates, if it does, trim as needed.

This is simulating the pedal fully released The bearing had sufficient clearance around the plates so it was time to turn up the Amps on the welder.. Compare an original fork to the reinforced one. It isn`t possible to weld along the sides of the arm where the release bearing goes, there isn`t sufficient clearance. The arm was refitted to the Gearbox and is now operating without issue and I should`t have an issue with this arm in the future.

To add some more detail around the reason behind the plates.  Imagine putting the bottom in a vice, and then pulling the top towards you, the areas in yellow would be the first to fail and crumple.

The bottom of the arm is a fixed pivot onto the Bellhousing.

The weakest points are where I`ve marked in yellow. Due to shape of the original pressing this is a weak area and is where other people have had failures. The reinforcement plates strengthen this area as much as possible.

The next weak point are the 2 areas marked in pink but there is no clearance to weld any strengthening in this area.