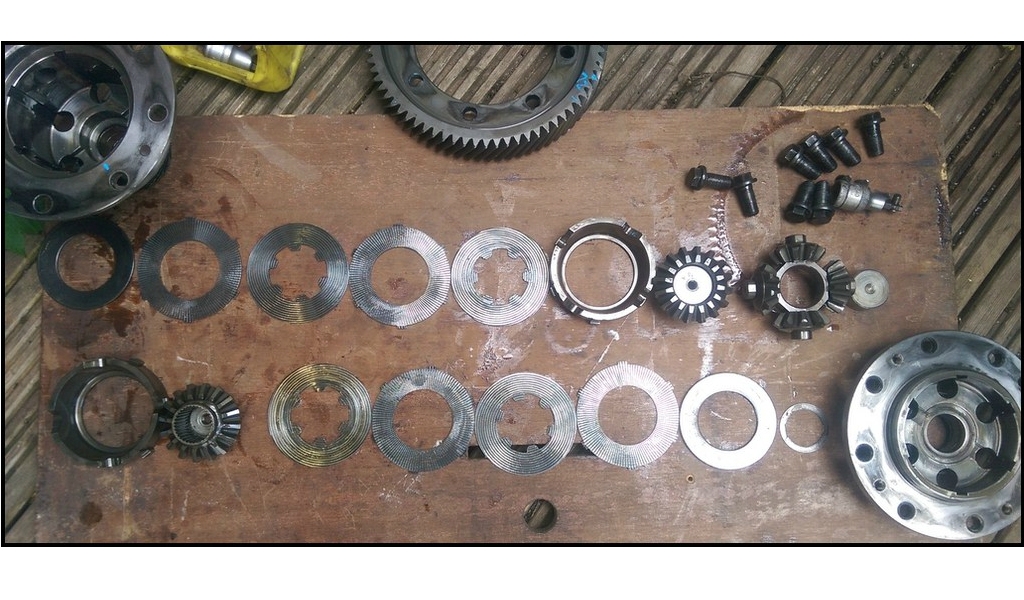 The general consensus was all proper FWD Race cars use Plate Diffs. They require maintenance and put more loads on CV`s, highlighting any weakness in the drivetrain.

As I`d had a few CV issues at that time I decided not to bother.

The car has been running reliably with no drive issues at all so I thought it was about time I started messing about again.

Whilst we were discussing his misfortune, the conversation moved to spare parts. Turned out he has an 02J Geatbox with a KAAZ Plate diff. Hmmmm

Matt picked up the gearbox yesterday, the casing had cracked around the bellhousing due to the impact and Neal sold the Gearbox saying he`d refund my money if it turned out the diff was damaged. Can`t say fairer than that

Stripped it down today. First off I drain the oil, very clean with no bits of metal floating around which is a GOOD sign.

Gearbox stripped then removed the complete diff with 4.25 Final Drive.

As I will be swapping this into my 3.6 Box, I removed the ring gear

Marked the 2 halves of the diff to ensure correct reassembly and split the casing by removing the Allen screws.

So was the next one

The 4th clutch has a small wear ring around the centre.

This is also on the radial plate next to it

Ramp angles. Don`t ask me what they are because I didn`t have anything handy to accurately measure them

Removed the spider gears and the central spacer. The 02J has bolt in drive Cups so the threaded insert is there to bolt them into, my 02a has push-in flanges

Pressure ring and clutch plates in the casing

These clutch plates as just as good as the other side

The Kaaz diff has a total of 8 clutch plates split 4 per side. These are assembled alternately to give the most lockup when needed, road cars run them in a slightly different order to reduce that lockup.

I`ll be removing and stripping my 3.6 box in the next week or so. Taking the Quaife out and fitting this KAAZ. The Quaife will then be fitted into the 4.25 gears ready to sell as a complete box. By being able to fit the Quaife which I overhauled last year into a 4.25 box which is excellent for N/A I should have no difficulty selling it.

I`m fitting the 3.6 & KAAZ combination ready for Zolder. It has several chicanes and will be a great test. Not only of how a plate diff compares to an ATB type, but to test the CV`s and make sure they hold up.

If I break lots of CV`s, I`ll refit the Quaife but I don`t expect that will happen. Neal ran this for years without issue.

I`m not selling the Quaife until after Zolder when I`ll make the decision around which one to keep although I can`t see why I won`t keep the KAAZ.

The synchro`s are in fantastic condition and there was no metal in the oil which was an obvious concern of mine when running a plate diff in a FWD gearbox suggesting my fears when discussing it last year were mostly unfounded.

Time will tell if this is a good move or not, but like many things, you don`t know until you try…