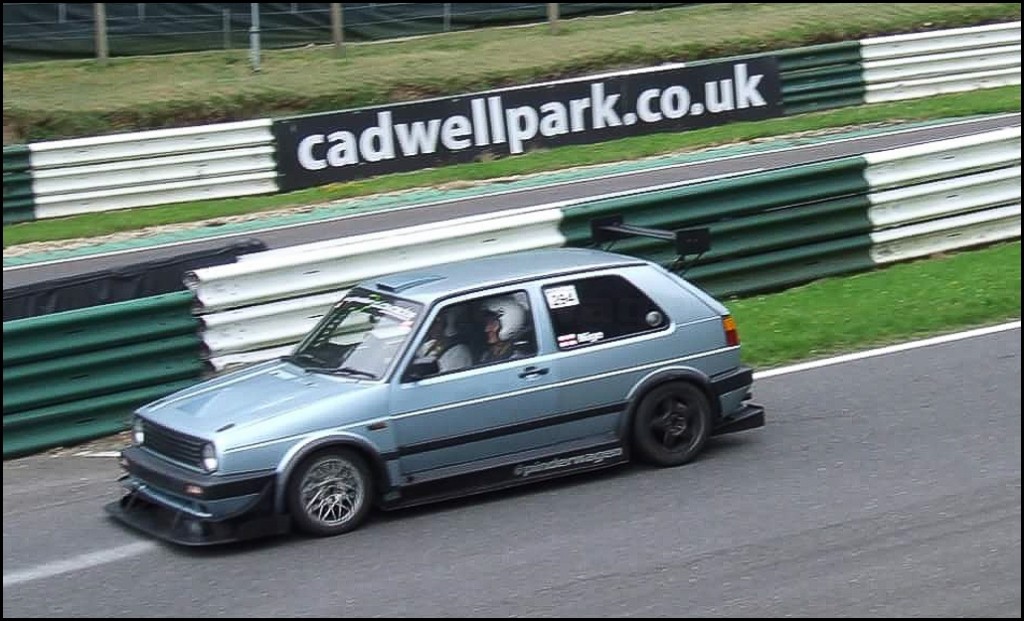 After the engine Strip and rebuild I recently carried out I wanted to get on track before going to the Nurburgring for the 2 day Ringmeister event on the 13th and 14th July .

The only trackday that I could attend within 2 hours driving when I wasn`t working was Cadwell with MSV. Typically, despite them having loads of UK trackays I wasn`t able to find a Circuit Days or Javelin event I could attend.

Usually I`ll share that I`m doing a trackday on Social Media and on various forums, that usually ends up with a few mates going as well and we have a more enjoyable day when there are a few of us on track together. The aim of today was to setup the car and I didn`t want the distraction of coming across a friend on track and spending half a dozen laps following them. Car unloaded, fully warmed up and taken for the noise testing where it read 99dB. That`s higher than usual so I need to look at the silencer packing again.

Briefing was the usual fare then out for the sighting laps.

I made sure I was at the back of the queue, dropped back from the car ahead on when we pulled onto Park Straight I did a 2,600rpm to 7,100 rpm pull in 3rd. No point hanging about and building up over several session. It`ll either work or it won`t. As expected it pulled nice and cleanly with no smoke or weird noises. With that out of the way I knew I could press on with confidence for the rest of the day whilst obviously keeping an eye on temperatures and checking under the bonnet after each session for any issues. Now onto the main aim of the day. Suspension setup. I bought the KW Clupsport back in 2015 and set them to the recommended Bump and Rebound settings and haven`t really done much since apart from softening them off in the wet.

I spoke to Andy Carlile and he gave me several pointers for how to go about setting up the suspension. The main thing was to take notes of everything after each session. Any little thing I felt should be recorded for further discussion.

I invited Darren along to drive the Golf. At the Ring he keeps asking for the keys but when I offer him them he never takes me up on it. I thought this was a perfect opportunity for him to have a drive and make himself comfortable in the car, that way he might have a drive at the Ring.

I drove the first session just to show him everything was working and so he could get a feel for how the Golf felt from the passenger seat. Anyone who knows me will agree, I`m not a brilliant passenger anyway and I`m even worse when it`s my own car ! However I was very comfortable with Darren driving. He built up the pace nice and steadily and didn`t try and prove anything. Once he understood the car a little he drove a bit harder but never in a way that made me concerned. He gave me some extremely useful feedback. When you drive your own car for so long you end up subconsciously driving around issues. By getting someone else to drive they can be more objective and point things out you`ve learned to live with

“The Brakes are really good, but are a bit grabby and vibrate a little” That`s down the Pad compound which once you are used to isn`t an issue but I can understand why he felt they were a little sharp. The vibration is from rubbish Hi-Spec discs

“The steering feels heavy and sometimes loads up” Matt girnned at this. He`s been telling me for ages that it`s too heavy but I wasn`t so sure

. Gurds had said it was heavy but that was before the balljoint extenders were fitted and they lightened up the steering a touch. With Darren saying the same I couldn`t deny it any longer.

The steering is an easy fix as I just need to remove the restrictor in the return line from the rack to the reservoir, I`ll be doing that before we set off on Tuesday.

I adjusted the dampers to full soft then went out for 3 laps, came in and made some notes then Darren drove 3 laps. Back into the paddock and we both had exactly the same feedback.

Adjusted to more Rebound and went out again. The steering and turn in was more precise, body roll reduced but traction mid corner and on exit was noticeably less than before. Darren drove and had the same feedback. He did seem to avoid some Apex`s more than others… Seeing as we both felt and reported the handling changes the same way, it made sense for each of us to drive with one set of changes then the other drive with the different. There was no need to both drive with the same setup as our feedback was the same. This halved the amount of driving required for any given change. Then Darren drove with Matt in the passenger seat. I was a spectator and watched my car drive past on circuit ! The first time that has happened since Matt drove at Thruxton years ago.

It is a strange feeling when you aren`t used to it but I took the opportunity to get a short video driveby of the car. We kept most of the sessions down to 3 or 4 laps. Not because of car issues but we because after 3 laps we had a pretty good handle on what effect the adjustments had made so staying our didn`t really add anything.

We did do some longer sessions and it was pleasing to see the Water and Manifold temperatures were rock solid when on track. When I was in the paddock Manifold temperature shot up to over 70 degrees C but within a lap they had dropped to 33 and sat around there no matter how I drove. I designed the cooling system to be able to keep everything cool regardless of ambient condition and I had no issues whatsoever today. As soon as  came backinto the paddock the lack of airflow caused the temperatures to rise again but the cooling fans are powerful enough to stop it overheating when queuing. Matt jumped in with me for a session and we were on the second lap when I had a rather exciting approach to the Mountain braking zone. Braking downhill to Mansfield was the same as usual and nothing felt amiss. I passed a Clio after the corner and then went for the brake pedal.

The pedal was higher than usual and I had to adjust my foot to press it. Once I had lifted my foot enough I pressed the pedal but it didn`t move

I had to press REALLY hard to get it to move but that locked up the wheels. The pedal then felt the same as usual and I was able to cadence brake whilst going towards the grass. I applied left hand lock and by coming on and off the brakes I was able to turn the car on the grass and rejoin at the top of the mountain.

The Clio had a ringside view and videoed it, although sadly the video quality isn`t great.

As you would expect, I came straight into the pits at the end of the lap to see what had happened. The freshly cut grass had blocked a couple of the brake ducts and the radiator mesh was partially covered. As we parked up, I could smell burning grass. This was from the grass on the brake discs. Removing the tyre showed a rather impressive flatspot. We`d felt the vibration on the cooldown lap so this wasn`t a surprise. Today was the last outing of the Pilot Sport Cups anyway so at least they went out in a cloud of smoke rather than wearing away. The rear tyres had several flat spots each from the Cadence braking. The brake ducts had allowed grass into the centre of the disc and out through the vanes which was where the smoke was coming from. I`d even managed to crack the fibreglass on the outer vane on the diffuser. The Brake pedal raising and being extremely hard to press immediately made me think boost pressure had made it into the Servo. That would have pushed the pedal upwards and made it hard to press. Instead of the vac assisting the braking, the pressure worked against it.

To stop this happening a check valve is always installed between the inlet manifold and the brake Serve. This is a one way valve that allows Vac into the servo but closes when the pressure in the manifold is higher than the servo. Holding the valve up and looking in the centre immediately showed the issue. You aren`t supposed to be able to see straight through a check valve ! I blocked the hose with an M10 Bolt and jubilee clip to isolate the plenum from the Servo.  I run a standalone Vac Booster pump anyway so still had Servo assistance. Looking at it, I don`t know why I even bothered connecting to the Plenum and I`ll leave it isolated so will never have the same issue again. I`d taken the Direzzas so fitted those and went back out again, this time concentrating on Bump adjustments. Feeling the difference between full soft where the car was wallowing around and taking ages to settle after a bump to it skipping everywhere on full hard was obvious but I struggled to discern the difference when making smaller incremental changes. One thing we both commented on was how hot the cabin and tunnel was. Seeing the bulkhead at 150Degrees C was probably the reason why. I think it`s partly down to the hot day and low top speed at Cadwell which doesn`t get a huge amount of air through the roof scoop and even though I wrapped the downpipe and external wastegate, that is closer to the bulkhead than before. I will be making a heatshield to try and reduce the temperature. We`d left it on actuator pressure all day so as not to overwhelm the tyres and enabling us to concentrate purely on the handling but at 4:30 we turned on the electronic boost control just to check everything was working. The change is always really obvious and it pulls much harder. Not because the ultimate boost target is higher, but because the ECU is much more aggressive in reaching that target so instead of it spooling normally, the ECU closes the wastegate until the target pressure is reached.

Most of the sessions were pretty steady but I had a couple of clear laps at the end of the day. Obviously I wasn`t going to push too hard seeing as I was going to Germany in a week and even Matt didn`t comment that I could go quicker. He knew that wasn`t the aim of the day either but the car felt great

Chequered flag came out at 5pm after 140 track Miles had been completed. Way less than usual and simply down the fact I did so many short sessions. I now have a far better understanding of what adjusting the bump and rebound feels like and the effect it has. I still need to fine tune the settings on a circuit but know which direction to go for a particular handling trait.

I could have driven straight from Cadwell to the Ferry and gone to the Ring with confidence. Obviously seeing as I have a free day on Monday I`ll take it off the trailer, remove the wheels and give everything a quick once over and repair the diffuser strake with some fresh resin but the actual engine and drivetrain was completely trouble free A pretty short report and I didn`t take enough photos but normal service will be resumed for the Nurburgring Trip.