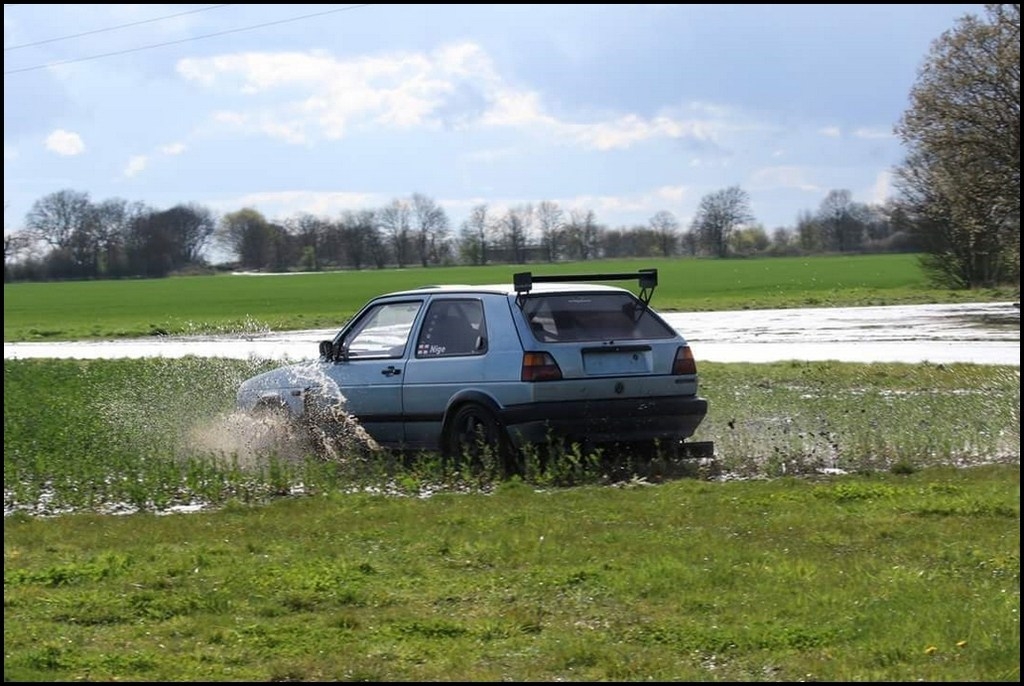 DN14 was supposed to be the next outing but to be quite honest, the last thing I wanted to do was travel all the way to Germany and find there was something wrong with the engine after the rebuild. I didn`t think there was, everything had gone well but I needed a shakedown first.

Fortunately Blyton is only just over an hour and a half away and Javelin had a day on Saturday. That gave me time to test the Golf, if it broke we could get Matt`s 328 sorted and take that out instead…

I had a wheel that kept losing pressure, tested it and it was obvious why, the rim was cracked. I`ve had 2 do this now, both were on the car when the caliper touched the rim at DN last year and the spoke cracked. Just shows how much force is put into the wheel when it catches on something ! The 4th wheel has been binned as a precautionary measure.

Arrived to find it damp and bloody cold, car off the trailer and tyre pressures checked then drivers briefing.

First session was on R1R`s as it was so wet and they were superb. Really good for a damp track and far better than wets which would overheat or cups which wouldn`t grip.

Out for the first session with some apprehension. limited myself to short full throttle bursts and 6k rev limit. Back in after 4 laps to check for any leaks or looks bits. No issues whatsoever. Oil level checked and topped up once the oil cooler was full.

Track was still really slippery so built up slowly on the next session as it dried out.

Once a dry line appeared we came in and fitted the cups. No point burning up the R1R`s.

Had a spectacular lockup into the Wiggler. Next lap round saw a huge black link on the track. Pitted to check and saw why.

Spares fitted and back out again. No car issues so I started to press on. It was still wet through the Wiggler and never really dried all day so experimented with different lines to try and find some grip.

A friend had popped along to see what it`s about. He`s heard me go on about trackdays for ages but has never been. I explained it was more of a testing day and not a fantastic circuit, but good enough to get an idea what it was all about. Took him for a session and he thoroughly enjoyed himself.

He was more impressed with the cornering and braking than outright acceleration. By now I was happy with the Golf and was driving as usual, revving it to 7k and no issues.

I`d felt a slight movement from the front right. It was either a wheelbearing, track rod, top mount or balljoint with some play. Jacked it up and it wasn`t the trackrod or topmount, some play showed either wheelbearing or balljoint but it was hard to pin down.

If you put an axle stand under the wishbone and let that take the weight, it pushes the balljoint into the hub. If the play goes, it`s the LBJ but if it`s still there it`s the wheelbearing.

The play vanished so I knew it was the balljoint. It was OK to use but when I removed it after Blyton, my diagnosis was confirmed

Lunchtime and the clouds were approaching.

We were fortunate, the rain seemed to pass either side of us and only lightly covered the circuit.

Matt took Kay out after lunch !

it was slippery too but he`s not bothered by the conditions, he just prefers driving his 328.

Apparently, the Golf can take up quite a bit of my spare time.

Lou doesn`t often ask for a lap but when she does, I do all I can to make sure to take her out.

A couple of laps to make sure she was OK then I started pressing on. I totally messed up my line into the Wiggler. I`d been chatting to Owen in the morning and knew he was there. I was thinking `NO, I can`t get stuck here ! I`ll never hear the end of it…`

If you watch this without it bringing a smile to your face, you need to lighten up

There is no excuse, I simply messed up

Matt happened to be in with Bob and heard Owen on the radio
`Nige is off at the wiggler`
`Do we need to Red flag it?`
`Hang on, he isn`t stuck yet.`
`OK, let us know if it needs Reds or a recovery`
`Blimey, he managed to get out. Lucky bugger !`

As I drove back into the pits, Bob was laughing and pointing. Him and Abby couldn`t wait to take a photo.

Trust me, I doubt there is any comment you could make that I didn`t hear on the day regarding free grass cutting services or ploughing

Lou made it clear what she thought.

Went back out. As we approached the Wiggler, we had to give a wave to Owen and Robert (the Photographer)

As we drove round the 2nd half of the lap, there were clumps of greenery on each corner, I`d obviously had more on the splitter to start with and clumps had fallen off as I went round each corner.

Came back in and took Matt out for the last session. It was almost dry so we could press on a bit and push the car. Well, the whole point was to check it was fine so no point it being gentle.
http://www.youtube.com/watch?v=m4XacnnFqj0

Bob is quite precious about his cones. I only meant to clip it. Honest…

Chequered flag came out just as the sun was shining !

Loaded up very satisfied with the day. I`d done 175 Miles, after lunch I thrashed it mercilessly for a 30 minute session and it didn`t miss a beat. No temp issues, nothing loose, no excess oil usage. I was VERY happy

This was an unplanned trackday booked at short notice with the sole intention of testing the car for longer and longer stints. As it turned out we had a cracking day and Dave really enjoyed his sessions in the car. We were talking the other night about it and he certainly wants to go again, but at a `proper` circuit next time.

I really like Blyton, it`s local, smooth and has a good combination of corners. For what I wanted it was ideal and reminded me how much fun you can have on a small converted airfield circuit like this.

After Blyton I took the Golf off the trailer, replaced that LBJ, checked the alignment and gave everything a quick once over. Nothing amiss so it went straight back on the trailer ready for DN14. Phew !

If they put the concrete there, you are supposed t