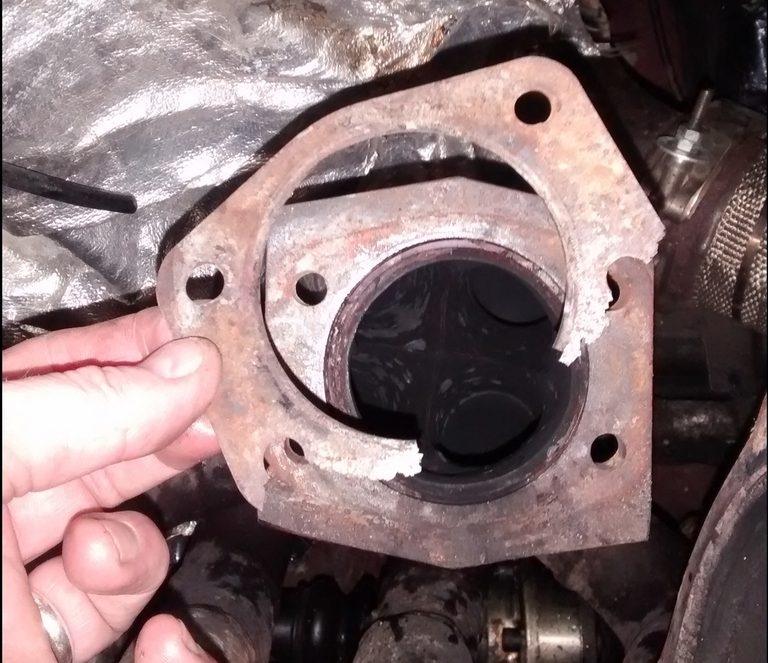 I decided it would be a good idea to check the manifold repair I made in the summer. I have a few overseas trackdays coming up, so it makes sense to check it now.

Removed the heat shield. Spotted a leak between the Turbo and downpipe. The plate was covered in soot

The underside of the heatshield was also covered in soot

Disconnected the oil and water hoses, felt underneat to remove the Manifold > Turbo bolts and something felt odd…

Yup, a Bolt was missing !! Only 1 of the remaining 3 was tight, the others were `nipped` ! I`ve highlighted the witness mark on the weld in Red where the nut was catching and not tightening properly. I thought it was tight but obviously not. That will be addressed.

The gasket showed pretty conclusive evidence it had been blowing.

The good thing was that due to the design of this inlet, with the recess in the Turbo, it wasn`t a big leak like you usually suffer. Obviously it`s not ideal, but it should have been worse with only 3 bolts.

Unfortunately, the Turbine housing is showing more signs of cracking. This is only internal and there is a lot of metal thickness in these areas. Still something to keep an eye on.

I`d noticed at DN13 and Brands that the Turbo seemed a little louder when I pressed the Boost button. Looking at the compressor blades and it was pretty obvious why !

The reason ? The inlet ducting had rubbed through on the underside, allowing Dirt to be sucked into the Turbo. This is the underside of the duct, just before the Turbo and not something that can usually be seen.

I`ll replace the ducting with a fully welded 3″ stainless section.

Matt`s E46 had a leaking rocker cover gasket. This is pretty common, the heat from the exhaust manifold makes the gasket go brittle. I need a small heatshield between the manifold and the rocker gasket on the Golf too, similar to many oem fitments, the rocker gasket has done the same and is weeping above the manifold.

There was some good news .

I removed the water feed pipe that sits about 20mm above the exhaust manifold.

Took off the wrap

The rubber pipe is unmarked ! NO cracking or brittle pipe, it was VERY well protected. That has been in use to 2 years and this is the first time I`ve removed the wrap to check it.

Even better news, since I repaired the manifold and added the downpipe flexi and brace, the manifold is showing ZERO signs of damage

OK, the Turbo blades damage is an issue. Fortunately it`s a £60 Turbo and I already had a replacement in the pipeline

The weeping Rocker Gasket and exhaust joints is a minor issue. They lasted 18 months initially, then when I disturbed them for the manifold repair and downpipe modification, I obviously didn`t tighten them as much. I now have some M8 Nordlocks so this won`t be a problem again.

Seeing the heatwrap protecting the rubber hose is a big relief. It might not look wonderful, but it does exactly what it needs and gives me confidence the loom, which is also wrapped in the same material is being well protected.

Anyway, started putting it back together, but continued with my aim of making it better if I can…

Remove Jubilee clip and it had cut through the outer layer and the braid, still the single layer intact AND it`s above the ridge, so unlikely to leak even if it had split.

Replaced with new hose. A braided would be nice, but I can`t get access with a spanner when it`s on the car, but I can with a bendy-Jubilee driver.

Turbo refitted. The long stud is what I fastened the heatshield to. With the Nordlocks, the bolt does NOT touch the weld, so I could tighten them all up

Made a small Aluminium heatshielf to help protect the rocker gasket above the manifold.

Borrowed a bender from work.

Welded a Banjo fitting on the end

As it will vibrate, I secured the end with a small clip.

I think going from this

The inlet duct had not only rubbed through, but there were obvious signs of it collapsing inwards under high load !!

I bought a 300mm length of 76mm Silicone hose. It`s 4 ply so shouldn`t be affected by the suction, but just to be 100% sure, I cut some old 76mm stainless tube I had left into 2 internal ribs. These were placed 80mm apart on the inside of the duct.

I`m pressing down HARD between the ribs and even that is impossible to collapse the duct. You can see my fingers going white at the end. No way will the suction be able to do that.

Fitted. Not only does it give a much smoother inlet tract, it won`t collapse but it is far more resistant to rubbing through than the old duct. Obviously I`ll check it after a few trackdays to see if it needs any external protection adding..

I fitted Turbo Blanket. I know there are good and bad points for these. So long as I give it plenty cooldown time before switching it off, it should be fine.

Needed to made a small hole for the actuator arm. It still moves freely. I applied pressure to the diaphragm to test travel was unimpeded using the same method as when I checked actuator travel.

It`s looking a bit tidier under there.

On the Dyno with a new DTA S80Pro ECU