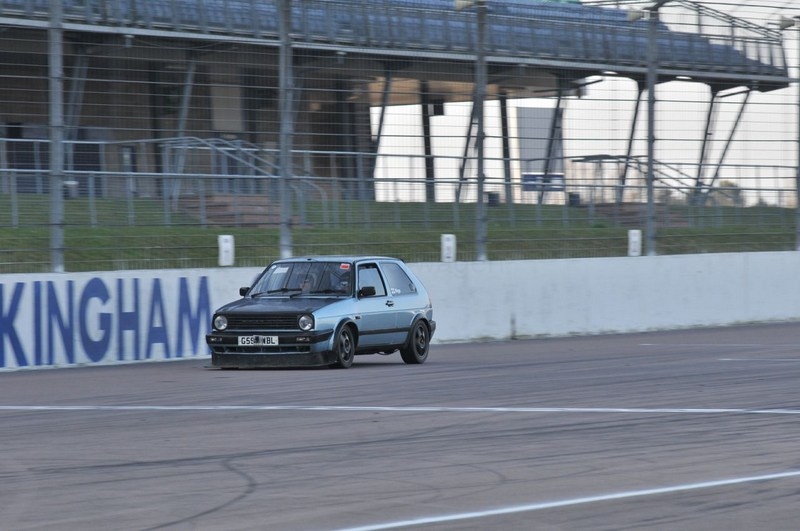 The very first outing after `the Golf `became `The Pinderwagen`

First trackday since the Turbo conversion so I was somewhat apprehensive before the day started.

This session, following Nick in his Porsche was great fun and I was delighted with the performance of the Golf allowing me to keep up on the straights for the first time ever !.

As usual, 720p looks much better Rear felt a bit looser than before, which I thought would happen. I`m fitting the diffuser with some quick release (but strong) mounts for Bedford so I can try it with / without. I will add a short piece of flat floow to belnd the existing floor to the diffuser, but until I`m sure the heat management is sorted, I won`t be fitting the full floor just yet.

I had a slight off circuit excursion. I did this at Rocky last time. Someone moved over to let me past, then I was too tight for the next corner at the speed I was going… This meant the camera was pointing down, so for this session, I had to zoom into the top 1/4 of the video which makes the quality look pretty rubbish.
First part with Peach behind, then I find Teffers @ 04:00

Driving the car felt great, engine revved to redline just as I hoped, no tailing off at all. I had to be more progressive with the throttle, booting it in 3rd just span up both fronts

That`s not a bad thing, it just made me smoother.

I really struggled with braking at the end of the long straight in the morning. Peach was saying how much he closed on me there. Took me a while to realise why. I was losing servo assistance at the end of the straight, so when I tried to H&T, I just wasn`t getting the braking I needed. Once I stopped trying to H&T, I could brake much harder

I`ll be Teeing in a Vacuum reservoir before Bedford to see if that helps, it should do. The non-return valve is working, but there is much less time when the engine is under vac compared to N/A. Braking when I do have engine vac is just the same as usual.

Next to last session of the day with Gurds. He`s still quicker in a straight line, but I was quicker in the corners this time. I know he`ll be trying to address that before Bedford

Final session was with Peach again. I really drove the car hard, I needed to know it was holding up. No issues at all. water temp is cool. Oil temp reached 102/104 when following him closely, but dropped straight back to 100 when I passed him. That was at the end of the long straight. I was quicker through the banked corner, got a run on him and braked later, on the inside…

Quickest lap of the day was with him behind me too

Fuel consumption wasn`t bad at all. I did 150 miles on track, lost some oil through the breather, had the drivers side hubnut loosen, I suspect this is due to wheelspin, that never loosened before. I didn`t think it was loose for long. The bearing felt fine after retightening.

Inlet air temps rise when on boost but drop very quickly when off again. Max temps seem to be around 50 degrees. I haven`t boxed in the intercooler yet. Once the sides and top are blanked, I expect better cooling. I also want to mod the radiator beihnd the numberplate to additional cooling if required.

Main `issue` is the effect of lifting the throttle mid corner. On N/A, it was easier to balance, with this setup it`s harder. As soon as you lift, the boost is dumped and the engine output changes noticeably. I have to be MUCH more gentle on throttle movements mid corner now. They all do that, I just need to get used to it.

We had a temperature probe mounted at various points in the engine bay through the day. Turbo outlet reached 250 Degrees at one point. The underside of the bonnet, directly above the turbo reached 104, so I`ll be protecting that with some reflective tape and/or foil backed fibreglass.

Nothing else melted, stopped working or broke.

I will be lifting the main camera position a little for Bedford, it`s a bit too low where it is IMO.

Here is a datalog screenshot from the last session of the day. 3rd and 4th gear. Trace starts rising from around 3,200rpm to 7,000. There is always a discrepancy between the actual AFR Gauge value and the one the ECU logs of around 0.4 to 0.5, It`s showing 11.2 on this trace, but the display was 11.7 The fact the rpm rate of climb doesn`t taper off at high revs is most pleasing.

The boost taking a little time to reach 9psi will be sorted.

Throttle is showing 87%, that`s a quirk of the datalogging software, the ECU was actually seeing 100%.