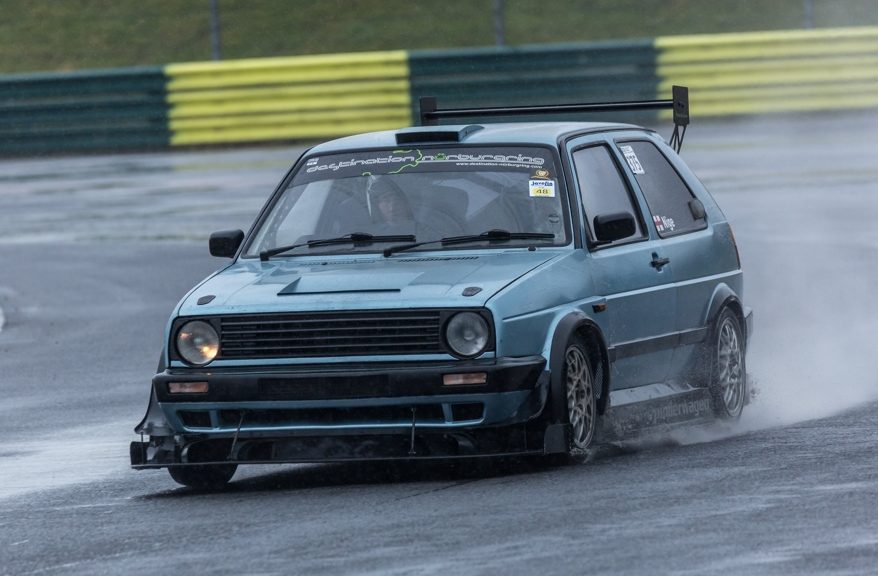 First trackday of 2018 after the winter check and overhaul was at Croft with Javelin Trackdays. Took a friend from work along, he`s a biker but has never been on a trackday although he does read my trip reports and is interested in the Golf and the whole track driving thing.

Arrived to find it absolutely throwing it down with large puddles on the circuit. Unloaded the tyres from the trailer into the garage. Ed who was sharing the garage had some slicks  but I somehow doubt they`d be getting used today. After the briefing we went out for the obligatory sighting laps and the windscreen started misting up. By misting up, I mean by the end of the lap, I could hardly see where we were going and we came straight into the pits. My RainX antifog was empty ! Reverting back to the tried and tested `liquid soap` from the sink we applied a decent coating to the inside of the screen, let it dry then buffed most of it off, still leaving a coating on the inside. Whilst not crystal clear it made a huge difference and I could actually see where we were going. The main problem was that our trousers were damp from unloading the car off the trailer and even though we left the coats in the garage, the dampness from the clothes we were wearing soon fogged up the side windows and the edge of the windscreen. I wasn’t alone having this issue and I lost count of the number of people who asked if I had any antifog they could have and I then explained to them about the ‘liquid soap’.

Years ago I never bothered reserving a garage but on winter days I often do and I was relived Ed and I had booked on for today. The track was open and hardly anyone was out lapping so we went out for a 5 lap session, just to give Paul some experience. As usual after a large rebuild I was listening out for any unusual sounds or feelings, taking my time to build up the pace so everything was up to temperature. I don`t think he was particularly happy… Coming back into the pits and there was a fair bit of smoke from the exhaust wrap. This always happens when I apply fresh wrap and it`s quite disconcerting the first time when you come off the track with smoke wafting out of the bonnet vents. After a couple of sessions of track driving it always clears up. The fuelling at the top 1/3rd of the map needing tweaking with the new cylinder head so I quickly adjusted that on the laptop then we went back out. It needed a tiny adjustment after the next session but from then on I never needed to touch the laptop again. I could tell Paul wasn’t thrilled. Yes, I know, that`s an understatement I spent the next lap talking the whole way round, holding the wheel with just my fingertips the entire time, explaining about letting the car move on the suspension and not driving with a death grip on the wheel. It`s something I often see, people holding the wheel so tightly they are fighting the car every corner and making life difficult for themselves. Learning to loosen up is something that took me a while, but usually the `fingertip lap` gets the point across. The rear of the Golf always gets covered in dirt when the track is wet. Even though he was apprehensive and knew the next session would be quicker, Paul still buckled in for another session. Had a good chat to Dan and Grant in the pits between sessions. Dan had a CV fail so was calling it a day. I told him I had a spare he could have, but the thought of changing it in the pouring rain didn’t appeal so he packed up and went home. Had a great session with Paul in his TT. That thing certainly has some grunt ! Over a lap we were pretty close and I wandered across for a chat afterwards. He was still setting up his sequential shifter but hoped to get it sorted before the next outing. John is stationed nearby and popped along to spectate. I asked if he wanted to come out for a session so he quickly signed on and jumped in the passenger seat. This is probably the wettest trackday I’ve ever done and the amount of standing water in places caused instant aquaplaning if taken at too high a speed. This resulted in some odd lines being taken at times. There were a few Clio Cup cars driving round in very close formation. I have no issue with that, apart from a few of the overtakes were a little bit late and certainly without consent. Several drivers had complained about them and Colin had a word. After that, I don’t believe anybody had any issues with them at all. The question I get asked more than any other is, “Does all this aero actually work?”. Simple answer is yes. Going into a little bit more detail, I explain that it increases the high speed stability of the car. The 1980’s MK2 Golf was never the most aerodynamic car to start with and it used to feel particularly floaty above 100mph. Fitting the splitter immediately gave me much more confidence in the front end when driving at speed. The flat floor, diffuser, rear wing, side skirts and larger front splitter were all added over time to equal out the aero balance. You can’t just simply stick on a splitter and wing expecting everything to work. It takes time and tweaking to ensure everything is working in harmony and giving the desired results. With just a large splitter, the rear became very unstable in fast corners. After having a lap in the car, the composure at high speed is the thing almost every passenger comments on. Compared to a modern car, which often has some aero already applied, the difference isn’t so big, but when compared to another car from the same era as the Golf, the difference is particularly surprising.

Nothing shows this more visually than a wet track day. The amount of spray produced by the various aerodynamic appendages is a very visual indication of just how much the air passing around the car is being worked compared to a standard vehicle. (I know the passenger door wasn’t fully closed…) Paul was feeling a little uncomfortable and said he’d let me go out and lap without him for a while. Ed was there with his E30 M3 sharing the garage, and I took him out for a session. After a few laps, he said ,“Nige, I go this fast in the dry!”

. I wasn’t that quick, but I do know that sometimes from the passenger seat it can feel that way. In the garage next to us were a group of people who were all sharing the driving of a Porsche 944. Jeremy asked if I could take him out for a few laps as he’d seen the Golf when he was on track. As we came back into the pits after the session, he exclaimed, “That’s been the highlight of my day”. I don’t go around asking for feedback and when people come out with something like that, completely unprompted, it really makes all of this worthwhile.

You may have read that over the winter I carried out a Plate differential inspection and complete rebuild  and I am delighted that it exceeded my expectations. When I first swapped from a quaife ATB differential to the plate diff, I felt a step improvement but at the time I didn’t know just how worn the clutch plates actually were. Driving the rebuilt diff with new plates was almost as big an improvement as when I first fitted the plate diff. The traction out of the corners was significant and I could really feel the diff tucking the nose into the apex. The only downside is the amount of clunking and banging it produces when driving around the paddock. Its so bad people turn and look as you drive past

. I’m quite looking forward to seeing just how good it is in the dry. Big thanks to Mike Jenner for sending me across this great selection of photos he took on the day!

Driving home Paul and I were discussing the day and his main comment was that even though he has watched the video’s, read my trip reports, talked to me in quite a lot of detail about the car, he simply wasn’t expecting the Golf to be as fast as it was. He had some passenger laps with some other drivers and they were more at the performance he was expecting but, “It’s just a MK2 Golf, I didn’t expect this”, sums up his overall thoughts

. He enjoyed the whole experience and was surprised at just how friendly and welcoming everybody was but I don’t think he’ll be back for another, especially a dry day when the cornering and breaking forces are quite a bit higher

If you have read this far, you’ll have noticed there has been no mention of any trackside repairs. That’s because the only thing I had to do was add petrol and adjust the tyre pressures. Nothing failed, broke or fell off and I put it onto the trailer having had a completely issue free day. After all the winter bits and pieces I’d done, this was a very satisfying result

If they put the concrete there, you are supposed t