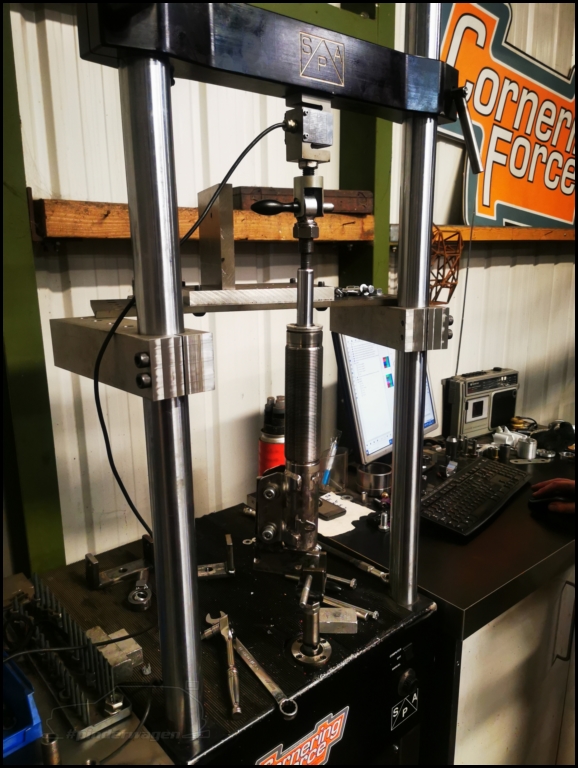 2 years ago I had my coilovers refurbished at Cornering Force in Harrogate. They are one of the very few companies in the country who can service KW coilovers. As it turned out they work on pretty much every serviceable type of coilover that exists !

Niko was showing me some photos of some Japanese iterations of Ohlins dampers they were sent and gave a service and cleanup. When the car was taken off the trailer the pool of oil was a dead giveaway ! Removing the damper from the car it was immediately obvious the offside one had failed on the original weld, just like the nearside did last time. I spoke to Niko and explained I had another leak from the cracked weld. He wasn`t surprised and they have started seeing quite a few KW dampers with this exact failure. It`s a design flaw and as the dampers are getting older, more people are seeing the same thing. KW’s response ? “Buy a new one” . As we’d had no issues with the repair on mine it was agreed I`d take the damper to them, they’d repair the crack and test / rebuild the damper.

Seeing as I was making the journey I decided it made sense to test the other 3 dampers. No point rebuilding one and finding out the others were in need of repair too.

First on the machine were the rears The Blue is Rear Right, Green Rear Left. Brown is RR with a change in Bump Both dampers performed almost identically and showed no change from the test back in 2018

This wasn’t unexpected, the rears on a FWD car don’t get worked as hard and Simon instantly told me they were absolutely fine and a service was unnecessary. That’s what I like to hear ! Next up was the leaking front damper. Cornering Force use a SPA Damper Dynamometer which runs through a set cycle of damper movements at increasing velocities. The damper performance is plotted on a graph in real time and it’s actually very easy for even a layman like myself to see if there is an issue. After running the test Simon showed me a problem area. The plot is in Pink and the curve is fairly flat and then rises, but what it should do is rise steeply and then level off as the Brown line shows.

He explained this would cause more body roll and less damping under initial corner entry, allowing more understeer than desired.

Even if it hadn`t been leaking, this damper would have required a service. The machine also shows a different plot of displacement vs force. What you are looking for is this rough overall shape, equal on each side of the zero axis Loading up the plot from my damper that was damaged in 2018, the one with the damage to the shim Showed how that shows up on the plot, again pointing to a damper that requires servicing. The damper was stripped. When drained the oil was showing slight contamination The outer housing was welded up and after inspection of the dampers and with some new seals they were rebuilt. When pressure testing it was found the weld had cracked on the other side of the bracket, this was also welded up. The damper was rebuilt and then tested where it was found to be working well. I asked them to compare the nearside damper with the serviced one, if it was the same it didn’t need a service.

Sadly that wasn’t the case. The rebound performance of each damper was noticeably different, but were matched in bump The damper was serviced and wear in one of the shims meant it required replacing to get the same response as the offside one. The graphs are the same shape with response being very similar on each one. After several tests, Simon recommended these settings as a good starting point when I refitted the dampers to the Golf. IF the damper hadn`t been leaking, I wouldn`t have had to have the fronts refreshed either.However the loss of oil meant it was never going to work properly.

By having that one damper rebuilt, it then highlighted the worn oil in the other one. I could have got away with simply running the worn dampers but with I’d have had to use higher settings on the bump and rebound adjusters to get a similar performance as I did after they were last serviced. Once one was rebuilt it was a safe bet that the other would need it to ensure they were as close to matched as possible.

I can now run them with confidence that whilst the performance will obviously degrade over time as the oil in them starts to break down slightly, the actual characteristics will remain the same, but instead of say 5 clicks from full hard, I’ll have to set it to 4 or even only 3 as they start to wear. These should now see me several years of use with no further servicing required.