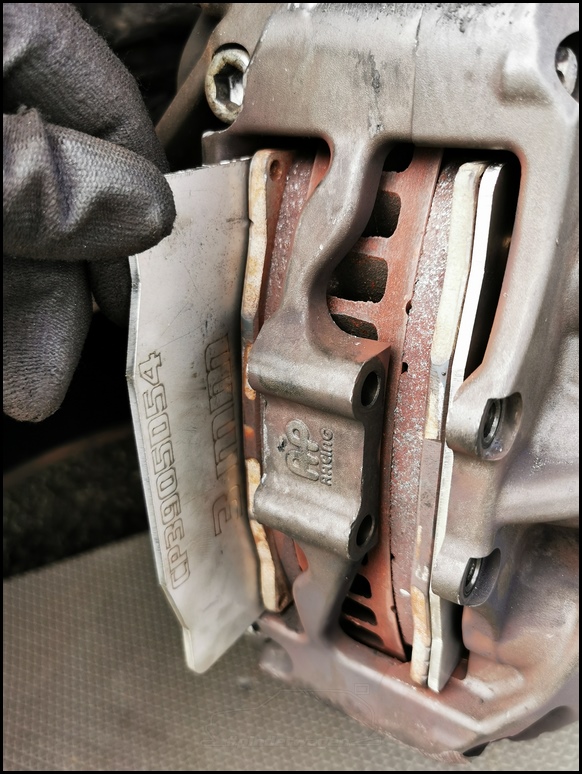 There are a few sellers of titanium brake pad shims online. The advertised benefit is the titanium reduces the amount of heat being transferred from the pad into the piston and in turn the brake fluid.

If you can keep the fluid cool, you have better pedal feel and taking it to the extreme, less chance of the fluid boiling and brake failure when the pedal simply goes to the floor.

My brakes don’t get that hot, frequent bleeding with SRF brake fluid and large discs means that isn’t a real issue for me.

However what I’ve always found is that as pads wear and the pistons are extended more, I experience a reduced pedal feel. It never feels quite as firm as when running newer pads when the pistons are fully retracted into the caliper.

When pads get quite worn I can push the pistons back into the caliper several mm as the friction material wears away. As I was getting some laser cutting done, I decided to get some varying thickness backing shims cut from 304Stainless Steel as a trial. I run the AP Pro 5000 series 9660 calipers and the pads are CP3905D54.

I settled on 0.9mm, 3mm and 6mm. I looked into getting them out of titanium but the company I use don’t offer that as an option. If I was suffering from fluid boiling and the stainless ones didn’t work I’d probably go elsewhere and try some out of titanum, but it would end up being quite a but more expensive.

The 0.9mm are pretty thin and the plan was to see if they would change the feel of a lightly worn pad to that of a new one 3mm was the next size up The 6mm are actually too large and by the time the pads are worn enough to fit them, I’d probably replace them anyway I also made a set up for Matts E36 which has the 4-piston CP9440 calipers with CP3215D50 pads although I didn’t bother getting those engraved. At a recent trackday I wanted to do a before and after test under the same conditions, with warm tyres and brakes. Pads were worn to the wear grooves and on this photo I’d already started removing the retaining bolts before remembering to take the photo Retainers refitted and back out for the rest of the day.

The pedal feel was improved. That initial travel where you feel the pads starting to bite felt fractionally better. These brakes are brilliant so I wasn’t expecting huge fains anyway. I was concerned that adding an extra part between the pad and piston may actually make the pedal worse, but the pad backing is flat, as is the shim and once the pedal is pressed for the first time they seem to fit so well there is no excess ‘play’ in that area.

What I did notice as the day wore on was the pads were getting hot whilst the pedal stayed firm.

When the fluid gets too hot, the pedal goes ‘soft’ and has a lot of travel with little retardation.

The pads getting hot is the opposite, the pedal is firm but even with a significant amount of pedal pressure, the brakes don’t seem to slow you down as much as usual.

This was confirmed when I came back into the pits where even after a cooling down lap, there was quite a lot of smoke coming from the brakes which is very unusual.

I believe the reason is 2 fold, the brakes were being used hard at this circuit and the pads were lower than I usually run. When they get to the wear slots I replace them but today I ran them well past that limit. By reducing the amount of friction material on the pad, the material gets hotter as there is less volume for heat dissapation.

Once I understood what was happening I simply pressed harder on the pedal and they worked just fine.

Back home and I remove the pads during the usual post-trackday inspection and found I’d used 2.7mm of material in under a day which is a lot but was not unsurprising.

By recording pad wear after events, I’ve found it accelerates as the amount of material remaining decreases. The shim had noticeably discoloured after just one day of use, remember this sits between the pad and the piston and it just shows the amount of heat that is being transferred into the caliper under heavy braking. The next test would be to put some temperature paint on the pistons to check peak temperature with and without the shims to conclusively prove if the stainless shims actually reduce heat transfer or not. I suspect the reduction would be quite low.

However I am very pleased with the pedal feel improvement on worn pads and I’ll be ordering 1mm, 2mm and 4mm shims next time I place an order so I can fit the largest shim possible before a trackday to minimise piston protrusion from the caliper and improve pedal feel whilst possibly reducing the heat transferred into the caliper and brake fluid.

Matt reported almost identical findings after running them on his brakes for a day on track and he is keeping them on his setup for future trackdays.

This is by not means a huge gain but they are something I will keep using simply to help initial pedal travel & feel as the pads wear. Yes they increase unsprung weight but I’m not a good enough driver to be able to tell the difference with them fitted or not.